How one word can change history: a reflection for Trinity Sunday 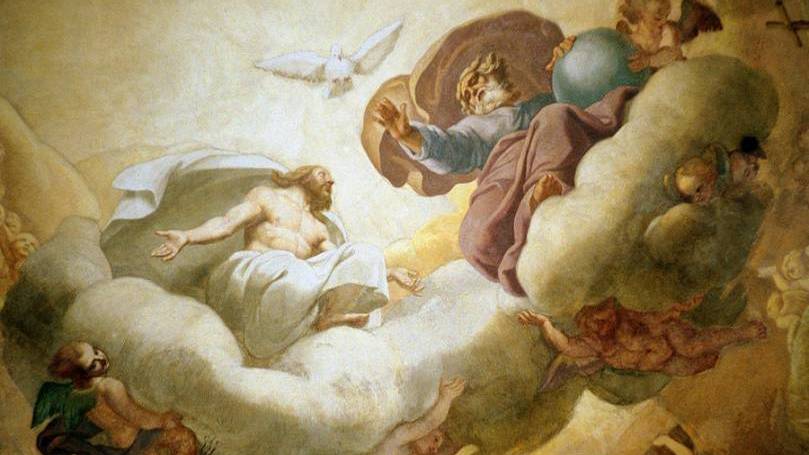 Detail from the cupola of the Church of the Val-de-Grâce in Paris, France, by Pierre Mignard, 1663-1665
On the first Sunday after Pentecost, the Roman Catholic Church, along with other western Christian churches, celebrates the Solemnity of the Most Holy Trinity, a feast day on which we affirm our faith in the triune God, who is Father, Son, and Holy Spirit. For Eastern Orthodox Christians, Pentecost Sunday itself is called Trinity Sunday and is the start of a three-day feast celebrating the one God in three persons. The concept of the triune God is essential to Christianity, so it is natural that a feast day would be dedicated to honouring God explicitly as the Holy Trinity. While the idea that God is a Trinity is agreed upon by mainline Christian traditions, the understanding of the nature of the Trinity has been a contentious issue for centuries. The original version of the Nicene (or, more accurately, the “Niceno-Constantinopolitan”) Creed stated that the Holy Spirit is, “the Lord, the Giver of Life, who proceeds from the Father, Who together with the Father and the Son, is worshiped and glorified, Who spoke by the prophets.” God the Father was understood to be the sole source of the Holy Spirit. In the Latin Church, the phrase “and the Son” came to be added to the Nicene Creed when referring to the procession of the Holy Spirit and was admitted into the liturgy of the western Church between the 8th and 11th centuries. The addition of this new clause into the Creed did not go over very well with the Churches in the East, who maintained the more ancient understanding. The Creed had been written in the 4th century at the Councils of Nicaea and Constantinople to express the essential beliefs of the Christian faith and to combat the heresy of Arius, who had gained a following over his claims that the Son was subordinate to the Father and not co-eternal with Him. The Filioque (Latin for “and the Son”) clause was probably added to the Latin liturgy because of survivals of Arian beliefs and other heretical Christologies, but  as far as the eastern Churches were concerned, the Latin Church did not have the authority to add to the Creed without convening a council and obtaining the consent of the eastern bishops. Along with the medieval rise of the papacy in which the Bishop of Rome began to assume universal jurisdiction over the entire Church, the Filioque clause contributed to growing tension that led to the 11th century schism which split east and west. Despite these issues, the schism was still pretty ambiguous, and relations continued between the Latin and Byzantine Churches for many centuries. The severing of Roman Catholicism and Eastern Orthodoxy did not become clearer until the Fourth Crusade of the 13th century and the sacking of Constantinople in 1204. This suggests that the separation was more political than theological. The Filioque clause is often understood by the Roman Catholic Church to mean that the Holy Spirit proceeds through the Son from God the Father, not that the Spirit originates from both Father and Son. This does not contradict the Eastern Orthodox view that God the Father is the source of the Spirit and the Spirit is sent by the Son. It is often helpful to understand the Trinity without anthropomorphic language, and one of my favourite analogies is that the Father is God the Source, the Son is God the Word, and the Spirit is God the life-giving breath of the Father/Source. Admittedly, the Filioque clause does make things more complicated in the west, as it opens the Trinitarian theology of the Creed to various interpretations. Recently, I was listening to a Protestant speak about the East-West Schism, and he mentioned that without the Filioque, Protestantism could never have happened. The clause emphasizes the role of the Son in the mediation of the Holy Spirit to humanity through the Word of God, and the Protestant Reformation was very concerned with the primacy of Scripture.  Christ as the incarnate Word is the complete revelation of God. However, the Scriptures are also God’s word, as inspired text through which God communicates with humanity. It is an interesting interpretation, especially since Protestantism generally preserves the Filioque in the Creed despite the Reformation being a movement that intended to purge Christianity of medieval innovations and return to the basics. Whether or not the Filioque is included in the Creed, and however it is interpreted, Christians of all denominations acknowledge the importance of the understanding of God as triune, as three distinct persons who are of one substance and who are, at the same time, one God. The Trinity teaches us the importance of relationship, as the three persons of God share in a communion of love that offers us a model for our own Christian life. As the Father, Son, and Spirit are one God, we as Christians are the many members of the One Body of Christ, distinct but united in an interconnected love for God and each other.