How much are our churches worth? 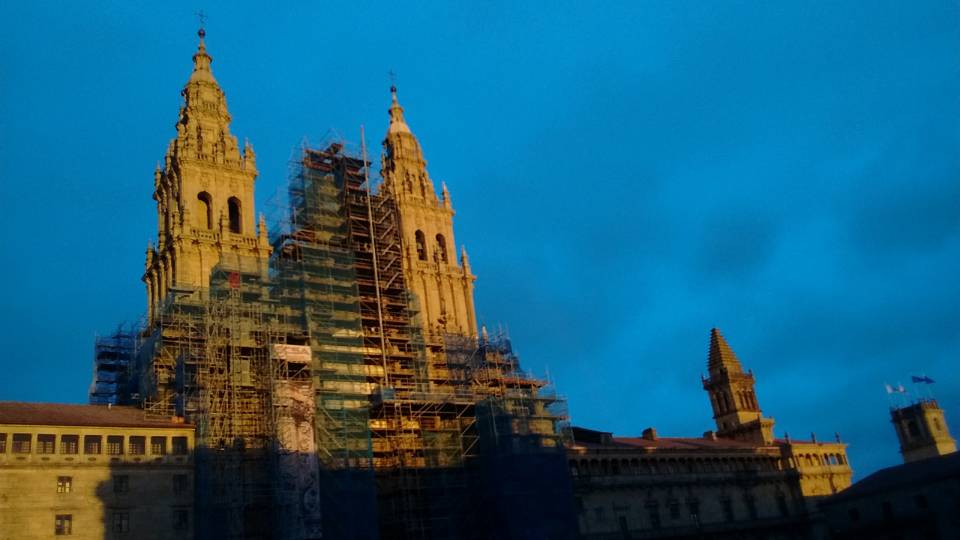 The cathedral at Santiago de Compostela in Spain is currently undergoing a 30-million euro restoration. (Photo: Kristina Glicksman)
Earlier this month, Queen Sofía of Spain presided over the reopening of one of the great artistic masterpieces of her country and an icon of medieval Spanish Christianity: the magnificent Portico da Gloria (Portico of Glory) of the Cathedral of Santiago de Compostela. And just in time, too. Today we celebrate the feast of St. James the Apostle, brother of St. John, evangelizer of Spain, and first martyr among the Apostles. His earthly remains reside in a small silver casket beneath the cathedral’s main altar and have been the object of veneration by pilgrims for over a thousand years. The portico has been under wraps for ten years as Spanish and international experts worked to clean and preserve this precious piece of Christian cultural heritage at a cost of 6.2 million euros (9.5 million CAD). Created in the late 12th century by a man known as Maestro Mateo and his workshop of sculptors, the work spans three arches and is a riot of figures: angels, saints, prophets, musicians, animals, souls of the glorious and the damned. And dominating all, the wounded Christ, who presides at the Last Judgment, and below him, St. James, welcoming all who enter through the main doors of the cathedral. There is no doubt that the portico is a brilliant piece of artistry, a stunning testament to human skill and creativity, and the restoration work, particularly the reapplication of colour to the figures, only adds to its splendour. But was it really worth 6.2 million euros? 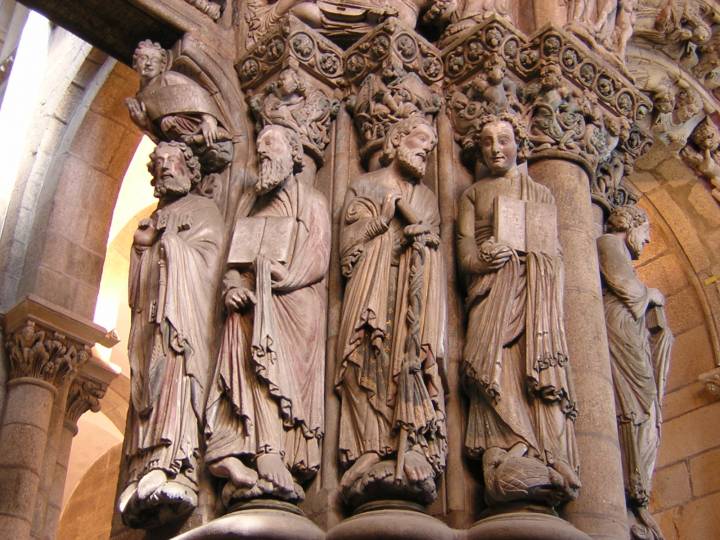 Apostles in the Portico da Gloria, before restoration (Photo: Pedronchi)
And that is only one part of the entire restoration work being carried out and estimated at a cost of 30 million euros. But even that is a drop in the bucket compared to the recent renovations of St. Michael’s Cathedral in Toronto, which cost $128 million, or of St. Patrick’s Cathedral in New York City at a cost of nearly $200 million USD (263 million CAD).

Why do we spend so much money restoring old churches?

We live in a society that places a high value on the practical and the utilitarian. Things that make life easier are prized above things that make life more meaningful. Beauty gives way to convenience. With such a mindset, it can be hard to understand the value of a beautiful building which needs extensive repairs, especially when you understand value only in terms of dollars and cents.

Wouldn’t a barn or an airplane hangar serve the same purpose?

As Catholics, we feel the value of our churches and our sacred art, and we might feel instinctively offended if someone were to suggest that we close Notre Dame Cathedral in Paris or the Basilica of the Immaculate Conception in Washington, D.C., and worship instead in a barn. But when someone asks us to justify the expense of maintaining and restoring these buildings, we can find ourselves at a loss for words. We’re even more stumped when they trot out the classic argument:

“Wouldn’t it be better to use that money for the poor?”

Of course it would. But it’s a misleading argument which presupposes that the two are in conflict. As so often in matters of our Catholic faith, it’s not a question of either/or but both/and. When I consider my budget, I don’t look at my rent and say, “Wouldn’t that be better spent on groceries?” or vice versa. Both are necessary. Both are our responsibility as good stewards of God’s gifts. It’s not a question of conflict but of balance.

It’s a question of what we value.

It can be difficult not to get caught up in the dominant mentality of the society in which we live, and it has seeped into our understanding of ourselves and our Church. Our understanding of the Church as the people – “living stones” – and not as buildings is used as an excuse not to look after our buildings or to create truly ugly churches. Trust me, I’ve been in churches that resemble barns and airplane hangars more than they resemble Notre Dame Cathedral.

But do we really need beautiful churches?

Yes. People often like to emphasize the spiritual over the physical when it comes to religion, but this is most emphatically not a Catholic view. The fact of the matter is: we are body and soul. They are both equally important, as highlighted by one of the great mysteries of our faith: the Incarnation of God in the person of Jesus Christ. This is another one of those both/and issues.

We worship God with our whole being.

That is why liturgy is so important and why it appeals to our senses (well, good liturgy does) and why we feel the important difference between a church that is beautiful and one that is not, even if we can’t explain it. Before he became Pope Benedict XVI, Cardinal Ratzinger wrote in The Spirit of the Liturgy:

“After the tearing of the Temple curtain and the opening up of the heart of God in the pierced heart of the Crucified, do we still need sacred space, sacred time, mediating symbols? Yes, we do need them precisely so that, through the ‘image,’ through the sign, we learn to see the openness of heaven. We need them to give us the capacity to know the mystery of God in the pierced heart of the Crucified. Christian liturgy is no longer replacement worship but the coming of the representative Redeemer to us, an entry into his representation that is an entry into reality itself. We do indeed participate in the heavenly liturgy, but this participation is mediated to us through earthly signs, which the Redeemer has shown to us as the place where his reality is to be found.”

And then there’s the people.

A church is not an isolated piece of architecture. It is born out of the community that builds it – an emblem of their faith and love and their hope in the resurrection. It is a product of the history of the Universal Church, coming as it does out of the repository of Scripture and Tradition. Although certain stylistic elements point to a particular place and time within human history, the church is much more than its physical reality. All the various physical elements – walls, towers, roof, windows, porticoes, altars, tabernacle – combine to encompass the entire history of the human race and reach beyond to what is transcendental, the reality that exists beyond sight and hearing: the awesome, ineffable Mystery pointed to in our liturgy. The Mystery by whom and for whom each of us was created, the sole purpose of the life of every human soul – the One for whom we long. If we can understand our churches – and especially our historic churches – as an expression of that shared longing and as a place to house those liturgies which connect us to the One in whom “we live and move and have our being,” then surely we will cease to wonder at the expense of creating and maintaining these precious expressions of our faith. Rather we will be humbled by the meagreness of the human imagination in its inability adequately to express so great a reality. 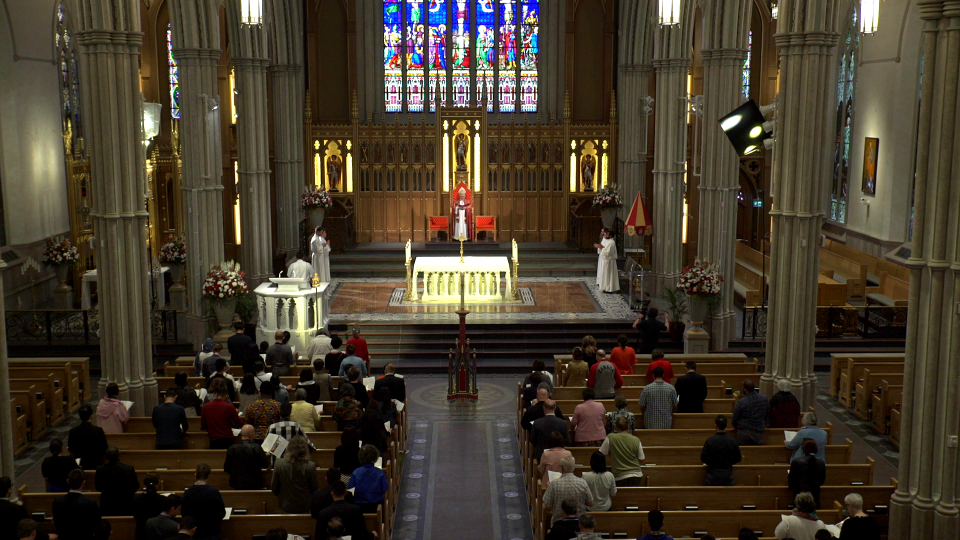