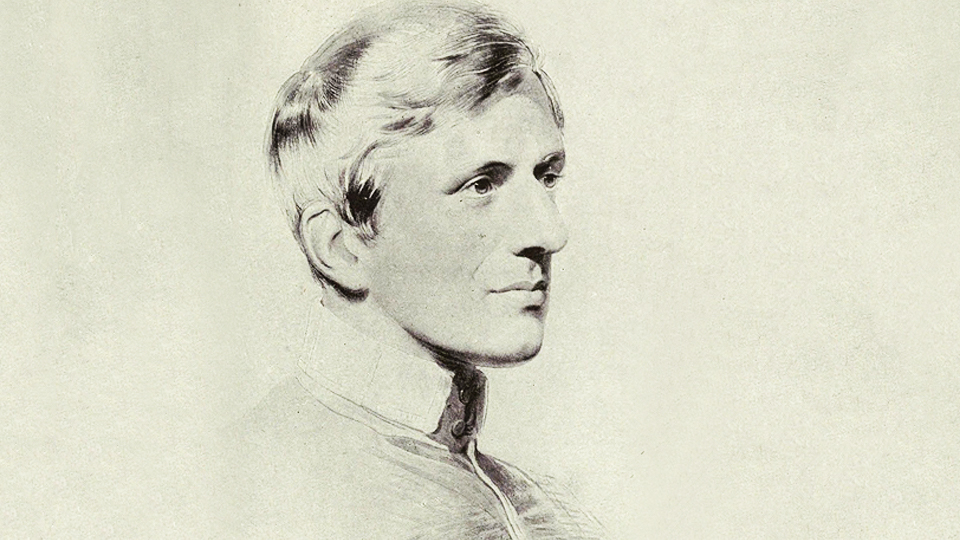 Portrait of John Henry Newman by George Richmond, drawn in 1844, a few years before the meditation quoted in this post
It never ceases to amaze me that something which started out as a blank piece of paper and some ink can become a window into the soul of another human being. And no length of time can diminish the freshness, the immediacy of that human connection.

I especially think about the incredible gift of writing on a day like today: the birthday of Blessed John Henry Newman.

Born in 1801, Newman is famous as one of the greatest modern thinkers of the Catholic Church – and of the Anglican Church, too, since he is also a famous convert. And he was the inspiration behind the vast network of Catholic ministries on university and college campuses across the world but especially in the United States. And the Daily Bulletin from the Vatican announced last week that Pope Francis has formally approved a second miracle attributed to the intercession of Blessed John Henry Newman, the final requirement for his canonization as a saint in the Roman Catholic Church.

But for me, Newman is the spiritual guide who showed me what it means to trust in God.

Six years ago I was lost.

I found myself living in a strange place where I had no friends, doing a job for which I was grossly overqualified and which (I thought) did not at all suit my personality. On Fridays, my coworkers would ask me what my plans were for the weekend. “Grocery shopping on Saturday and Mass on Sunday. Probably won’t talk to another human being until Monday.” They’d smile and say, “Ok, well, have a good weekend!” Often at Sunday Mass, the people around me would refuse to shake my hand at the Sign of Peace, and I would leave church with my heart aching because I had to wait seven whole days before I could have another opportunity to touch another human being. I missed my friends and the places that were familiar to me. The pain of parting was still fresh, and I was grieving for my loss. Although there were moments of joy, more often it was a time of isolation, anguish, and desolation.

I was convinced that it was where God wanted me.

But I struggled to understand why. Then one day a line popped into my head:

“God has created me for some purpose.”

I had heard that somewhere. Who had said that? Wasn’t there something more? I put it into Google, and before long I found that it was by John Henry Newman (though I had it slightly wrong) and that it was part of a meditation. It didn’t take me long to find the whole text.

And what I found changed my life:

God was all-complete, all-blessed in Himself; but it was His will to create a world for His glory. He is Almighty, and might have done all things Himself, but it has been His will to bring about His purposes by the beings He has created. We are all created to His glory—we are created to do His will. I am created to do something or to be something for which no one else is created; I have a place in God's counsels, in God's world, which no one else has; whether I be rich or poor, despised or esteemed by man, God knows me and calls me by my name. God has created me to do Him some definite service; He has committed some work to me which He has not committed to another. I have my mission—I never  may know it in this life, but I shall be told it in the next. Somehow I am necessary for His purposes, as necessary in my place as an Archangel in his—if, indeed, I fail, He can raise another, as He could make the stones children of Abraham. Yet I have a part in this great work; I am a link in a chain, a bond of connexion between persons. He has not created me for naught. I shall do good, I shall do His work; I shall be an angel of peace, a preacher of truth in my own place, while not intending it, if I do but keep His commandments and serve Him in my calling. Therefore I will trust Him. Whatever, wherever I am, I can never be thrown away. If I am in sickness, my sickness may serve Him; in perplexity, my perplexity may serve Him; if I am in sorrow, my sorrow may serve Him. My sickness, or perplexity, or sorrow may be necessary causes of some great end, which is quite beyond us. He does nothing in vain; He may prolong my life, He may shorten it; He knows what He is about. He may take away my friends, He may throw me among strangers, He may make me feel desolate, make my spirits sink, hide the future from me—still He knows what He is about. O Adonai, O Ruler of Israel, Thou that guidest Joseph like a flock, O Emmanuel, O Sapientia, I give myself to Thee. I trust Thee wholly. Thou art wiser than I—more loving to me than I myself. Deign to fulfil Thy high purposes in me whatever they be—work in and through me. I am born to serve Thee, to be Thine, to be Thy instrument. Let me be Thy blind instrument. I ask not to see—I ask not to know—I ask simply to be used.

I read those words again and again. I printed them out and tacked them up on the board behind my computer and read them every morning before I started work. Certain phrases always jumped out at me. How can I describe what it means, when to worldly eyes and at times even in your own, you seem to have failed at life, to be told that even this is a necessary part of God’s plan for the world and that “whether I be rich or poor, despised or esteemed by man, God knows me and calls me by my name”?

I felt that Newman understood.

And how did he respond?

“I give myself to Thee. I trust Thee wholly.”

I felt that he was writing across nearly two centuries to tell me that “God has created me to do Him some definite service; He has committed some work to me which He has not committed to another.” Sometimes the thought fills me with a sense of purpose. Sometimes it is the only thing that keeps me going day after day.

But I was struck most of all by the final line:

“Let me be Thy blind instrument. I ask not to see—I ask not to know—I ask simply to be used.”

What a magnificent expression of trust and abandonment! Later I would have a heated argument with my friend and confessor over whether Newman meant that he didn’t ask to know or that he desired not to know. (I believe it is the latter.) It is hard sometimes to let go of the desire to find meaning in our lives, to find meaning in every occasion, especially in times of pain and difficulty and suffering. But there is great freedom and great joy in finding the simplicity and humility of spirit to trust so completely in God as to say:

“Let me be Thy blind instrument. I ask not to see—I ask not to know—I ask simply to be used.”

And so to return to the gift of writing.

Blessed John Henry Newman was a prolific and gifted writer. He is best known for the sort of theological and philosophical writing that would make most laypeople run quickly in the opposite direction. But he also wrote a large number of poems and meditations that lay bare the heart of a saint. His talent for language is an immense blessing for English-speaking Catholics. While we in the Catholic Church are fortunate to have many, many saints who have left us written testimonies, sermons, and words of advice, as English speakers we have to read most of them in translation. But there is something so utterly personal in the words and in the language a person uses when they think or speak. To have access to the mind and heart of a saint without the intervention of a translator is a blessing the importance of which cannot be overstated. And for me, that reality is not academic. It is personal. Because, in the end, for me, John Henry Newman will always be a friend and a father, the spiritual guide who came to my aid when I needed him most.