Holy Land: A Souvenir, A Reminder 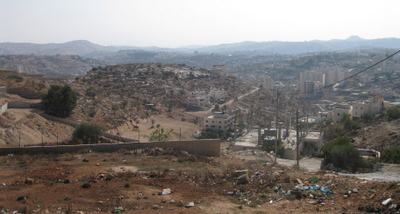 I’m not one for souvenirs. In fact, I find them very stressful: will so and so like this, what if so and so has something like that, if I get so and so something then I have to get so and so something too…and so on. But heading to the Holy Land I did have one souvenir I wanted to purchase: a Nativity set in Bethlehem. This was part of my goal as we entered into the Palestinian controlled city. Bethlehem was noticeably different from Jerusalem. It felt poorer, and even more desperate. Speaking to our cabbie he explained that tourism – the only real industry in the city – has bottomed out. This is a familiar story not only in Bethlehem, but in cities like Jerusalem, Nazareth and throughout the entire country. I suspect politics in the region has also played a part, and has made difficult times even more pronounced. Despite the lower levels of tourism, the three major holy sites we visited had a healthy amount of tourists. At least three Masses were being celebrated when we arrived at Shepherd’s field, the location traditionally held to be where the angel appeared to the shepherds and choirs of angels sang of the glory of God. Also busy 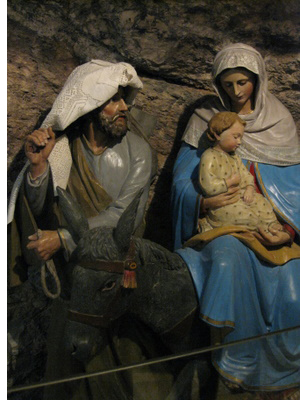 was the Chapel of the Milk Grotto, a site that is associated with our Blessed Mother feeding the infant Jesus on the Holy Family's flight into Egypt. This chapel winds around an underground cave and features a magnificent statue of the Holy Family. Finally we made our way to the Church of the Nativity – its battered façade fits with the feel of the city. Curiously, the inside looks run down and spectacular at the same time. I suppose that will happen with a Church that is a few hundred years old. Beneath the altar in the grotto is the traditional location of where Christ was born and the manger where he was laid.

In the hustle and bustle of this particular holy site – and thus far the Church of the Nativity has been probably the most chaotic – I came to realize the importance of preparation for visiting sites in the Holy Land. Read Scripture pertaining to the site the day you visit it: meditated on it, read it over, pray about it (think: Lectio Divina!). It may take more time in preparation, but you will get more out of the experience. Give yourself extra time at the site to pray and to open yourself to the graces that are there as well; sit in a corner, and contemplate what is before you. Unfortunately, we were on a tight schedule, and were unable to do this on that particular day. Sticking to the schedule, we left the Church but not before our cabbie’s cousin wanted to show us some Palestinian hospitality – conveniently at the shop he runs. This was fine by me – I still had `Mission: Nativity Set’ to accomplish.

As we made our way to his shop, we past a few little shops carving olive wood into little figures, crosses, and little religious `knick knacks’. Some men smoothed the wood, others used jigsaws, all worked diligently. It was a fascinating process to watch – they weren’t using molds, or massive carbon copy machines – just working on each piece one at a time. Looking at the hand carved figures I can’t help but thinking of St. Joseph hand carving toys for the Child Jesus! Visiting our cabbie cousin’s shop I found my Nativity set. “It was carved here, by my family, and not in China!” he proudly proclaimed. He didn’t have to sell me on it, I was ready to take it. It wasn’t long before we were on our way back to Jerusalem. It was a visit of less than three hours to Palestinian territory – but it left a lasting impression. Even now I can’t help but thinking of Christians there and, as their numbers dwindle, the challenges they must face. Each Christmas when I look at my Nativity I will think of Bethlehem. I will think of peace and pray that the Prince of Peace will move the hearts of all men and women throughout all of the Holy Land... that they will allow God to mold them -- or carve them -- into bearers of peace, brokers of peace, lovers of peace.