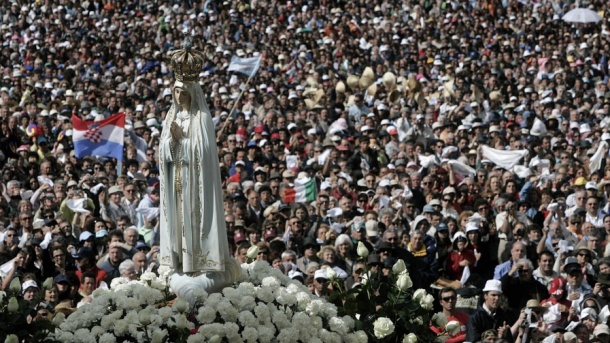 Yesterday, Saturday October 12, the original statue of Our Lady of Fatima arrived in Rome where it was part of various celebrations commemorating Marian Day for the Year of Faith, including a prayer service with a catechesis and a vigil with a video message to Marian Shrines all over the world. The statue has only left the shrine for exceptional and extraordinary events. The last time was during the Great Jubilee of the year 2000 when, on May 13, Blessed John Paul II carried out the act of consecration to the Virgin.
Today, Sunday morning, October 13, the anniversary of the final appearance of the Virgin to the three shepherd children in 1917 in Fatima, the statue of the Virgin returned to St. Peter's Square where it was once more taken in procession across St. Peter’s Square. The procession was followed by Holy Mass celebrated by Pope Francis. At the end of Mass, the Holy Father consecrated the world to Our Lady before praying the Angelus.
Tune in to watch the Holy Father's Mass on S+L TV at 10am ET, 7am PT. Download the Mass booklet in order to follow this morning's celebration. (See our schedule for rebroadcast times)

The statue of Our Lady will remain in Rome until Sunday evening when it returns to Fatima.
-
CNS photo/Nacho Doce, Reuters