Holy Land: Something to Agree On 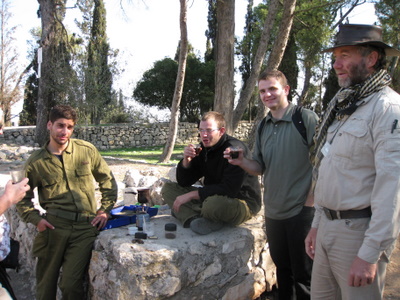 It’s amazing what you come across on top of Mountains.  We met some Israeli soldiers at the top of Mount Tabor.  Our guide Arthur struck up a conversation with them and they offered us some coffee they were brewing on a single burner camp stove.  Though not a coffee drinker, I didn’t want to appear impolite and after some coaxing I decided to sample a cup (or in this case, a glass).  It was fantastic!  I asked what gave it its unique flavour. “It has cardamom in it.” The soldier revealed to as he handed over a green and white package covered in foreign characters, “It’s Arab.” Pausing, he added sheepishly, “They make the best coffee.”