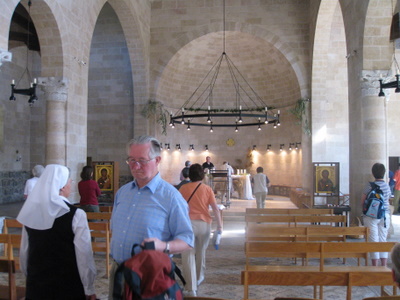 I was transported back to World Youth Day 2005 at Sunday Mass.  We were at the Benedictine Monastery in Tabgha, whichhas particular care for German Pilgrims.  The site marks what is traditionally believed to be the location of the miracle of the Multiplication of the Loaves and Fishes – the Church there taking its name from the miracle. The liturgy was magnificent – yes, in German, but easily enough to follow especially if one had their Missal with them.  It brought me back to Fuchtorf, the tiny village where my WYD05 group spent the days in the diocese.  Fond memories of one pilgrimage, on another pilgrimage!  It was a beautiful way to spend a Sunday morning, and even more special to participate in a Mass at a Church that recognizes a miracle that is seen as a foreshadowing of our Lord giving us himself in the Blessed Sacrament. And after feeding five thousand:

“Then he made the disciples get into the boat and go before him to the other side, while he dismissed the crowds.” (Matthew 14:22) 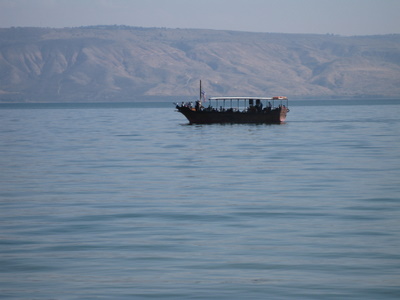 I can see clearly in my head where the disciples would have gone.  I remember on our boat ride on the Sea of Galilee I was looking at the monastery on the shore… my imagination painted our Lord on the shore… you could so easily picture it!  Looking around the Sea of Galilee, so many passages from Scripture danced in my head. As someone suggested to me before leaving Toronto, you look around and half expect Jesus to be there!