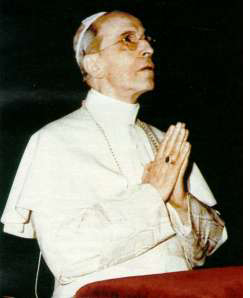 As moving as the visit to Yad Vashem was for me, I was deeply disappointed to see the widely reported text that condemns Pope Pius XII.  The controversial display slams Pope Pius for not making enough of an effort to save Jews.  The display is small, the text brief, and for such a complicated and controversial manner I found it to be irresponsible for the museum to publish what they did.  Unfortunately, now they are contributing to an anti Pius XII campaign --  a campaign that is more fashionable today, than it is based on fact.
A staunch defender of Pius XII, Sister Margherita Marchione, MPF, has spoken out about the display.  Here is the statement from Yad Vashem, with Sister's comments italicized:"

"Pius XII's reaction toward the killing of Jews during the period of the Holocaust is controversial. In 1933, as the Vatican Secretary of State, in order to maintain the rights of the Church in Germany, he signed a Concordat with the Nazi regime even at the price of recognizing the racist Nazi regime. When he was elected Pope in 1939, he put aside an encyclical against racism and anti-Semitism prepared by his predecessor." Pius XII wrote his own encyclical, Summi Pontificatus, which did deal with racism. "Although reports about the assassination of Jews reached the Vatican, the Pope did not protest either by speaking out or in writing." This is not true. Whenever Pius XII spoke out, there was immediate retaliation by the Nazis. There were more than 60 protests! "In December of 1942, he did not participate in the condemnation by members of the Allies regarding the killing of Jews. Even when the Jews were being deported from Rome to Auschwitz, the Pope did not intervene." The Pope did indeed intervene. After that first day, the SS were ordered to stop the deportation of the Jews in Rome. "He maintained a neutral position except toward the end of the war when he appealed on behalf of the government of Hungary and of Slovakia. His silence and the absence of directives obliged the clergy in Europe to decide independently how they should behave toward the persecuted Jews." This is not true. Members of the Church were ordered to protect all refugees and Jews.

To read Sister's full article click HERE.  She's also featured in the new S+L documentary Hand of Peace: Pope Pius XII & the Holocaust.  The documentary premieres Sunday, November 23rd at 9pm on our network -- be sure to watch it for a full picture of the controversy and to learn the efforts that the Pope took to save Jews.