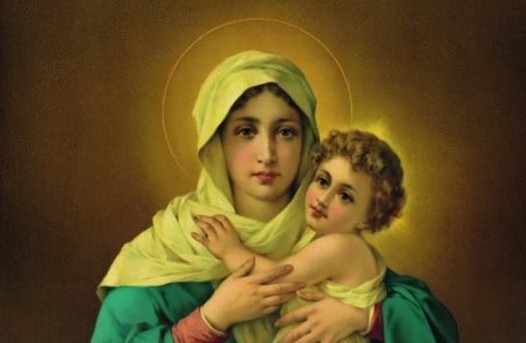 In the previous installment of this series on obscure Marian devotions, we met Father Jakob Rem, a German Jesuit who had a hand in the devotion to Mary Untier of Knots. It turns out Fr. Rem had a deep devotion to Mary and wanted to promote devotion to Mary as a way of renewing the church of his day. As a result, Mary was not shy about revealing herself to Fr. Rem.
Fr. Rem did his Jesuit Novitiate in Rome where he met confreres from around the world, including several future saints. He also got to know the Marian Congregation, which was founded by Johann Leunis, a Flemish Jesuit. This Marian Congregation, essentially a Marian sodality, impressed Fr. Rem. When he was transferred to Ingolstadt, Germany in 1595 he founded a similar sodality, the Colloqium Marianum, which was to be a vehicle for the renewal of the church. The colloquium adopted the icon of Our Lady Salus Populii as their devotion image of Mary.
In 1604 Fr. Rem was wanted to know which of the invocations of the Litany of Loreto Mary preferred. One day he was praying before the icon of Our Lady Salus Populii while said litany was being sung by the choir. Suddenly Mary appeared before him and he was seemed to levitate. As soon as the invocation “Mater Admirabilis” was sung, she disappeared. Fr. Rem hurried over to the cantor, who was a close friend, and asked him to sing that invocation again, and again.
The incident was a little odd, and everyone around noticed what had happened. Eventually Fr. Rem spoke to his superiors about the apparition and the insight he received. It seems because of that repetition of the invocation, people began to refer to Mary Salus Populi as “Mother Thrice Admirable.”
Many people in North America have probably never heard of Mary Mother Thrice Admirable. Today she is the patroness of the Schönstatt Community, a German-based Catholic community with lay and consecrated members.
Devotion to Mary Thrice Admirable became a popular German Marian devotion. In 1896 Jesuit Father Franz Hattler wrote a book about Fr. Jakob Rem and the Colloqium Marianum. In 1915 a certain Father Joseph Kenntenich came across that book as he was in the process of setting up a Marian Sodality that was quickly turning into something more.
The vision of the Colloqium Marianum as a vehicle for Catholic renewal struck a chord with Fr. Kenntenich. This was precisely what Fr. Kenntenich was hoping to do with his new movement, Schönstatt.
Schönstatt already had a devotional image of Mary. In 1914 a local teacher donated a print of a painting by Luigi Crosio. The Swiss printing house that distributed copies of the painting referred to it as “Refuge of Sinners.”
Fr. Kenntenich and the first Schönstatt members decided to adopt the title Mother Thrice Admirable for their donated image of Mary.
Still, the question remains, why is she thrice admirable? Schönstatt explains that She is admirable as Mother of God, Mother of Christ, and Mother of all human beings.
Today, the image most widely associated with this title and devotion is the 1898 image that graces every Schönstatt shrine around the world. Every Schönstatt family has a chance to play host to Our Lady as part of the Pilgrim Mother campaign. The image is passed from one family to the next in a special frame that becomes a sort of shrine. Each family has the image for a certain amount of time, during with they make a point of praying together as a family and inviting others to come and pray to Mary.
These families don't just pray to her or venerate her. Schönstatters offer Mary their attempts at holiness, big and small. In return, Our Lady gives them her help as they continue on that path to holiness.
As a result, the Schönstatt devotion to Mary, Mother Thrice Admirable is more than a devotion. It is a friendship with Mary that can change the world, one heart at a time.
---
Photo: Mary Mother Thrice Admirable