Healing the wounds of Canada: Pope Francis and the Indigenous 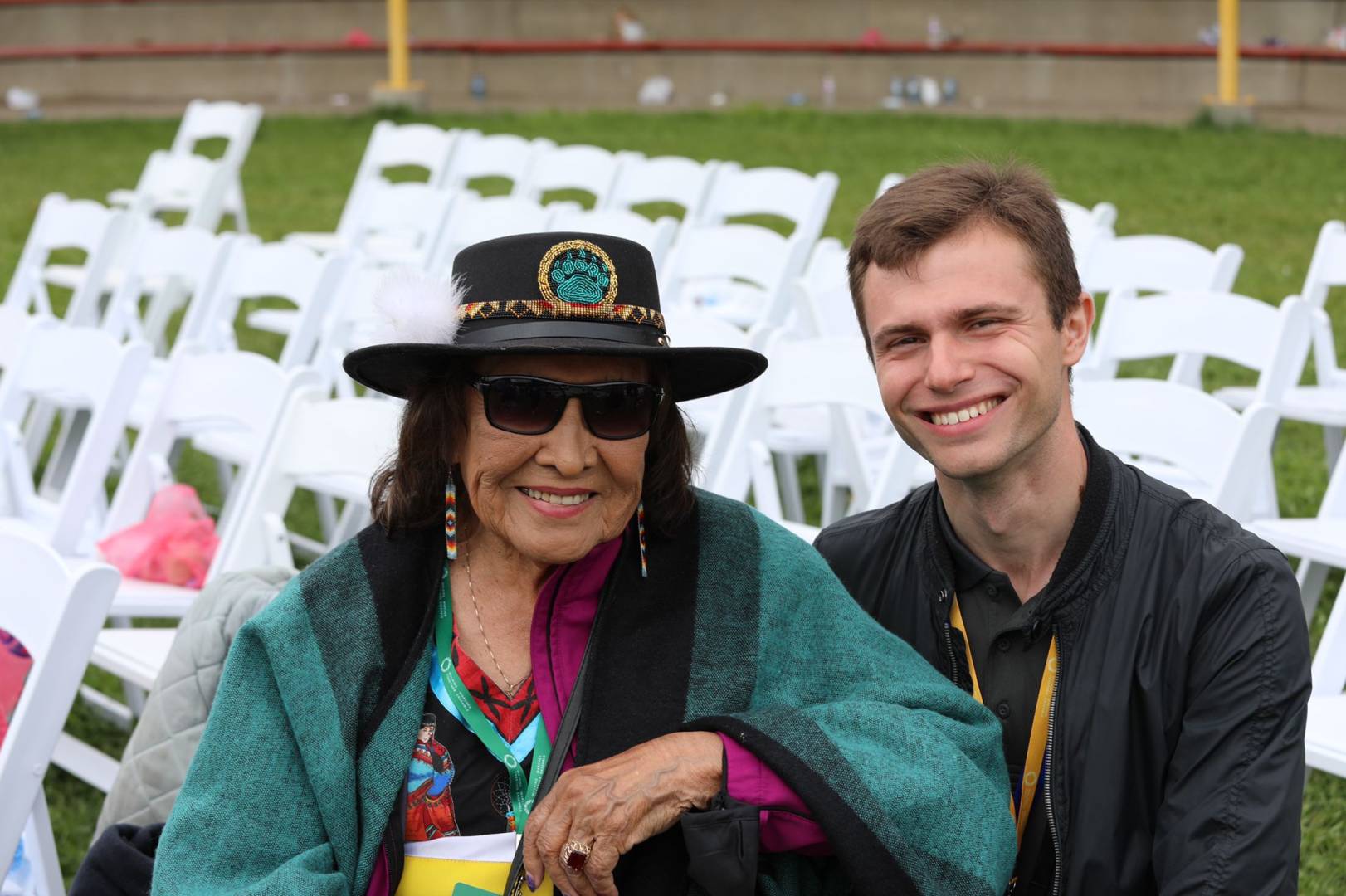 Julian Paparella with Lina, a 90-year-old residential school survivor, on the morning of Pope Francis' apology in Maskwacis, Alberta on July 24, 2022.
As I stood in Maskwacis, Alberta, witnessing Pope Francis arrive to deliver his much-awaited apology to the Indigenous peoples of Canada on their lands, I was cut to the heart. Two things struck me simultaneously. First, the suffering, pain, and intergenerational trauma that has wreaked havoc on Indigenous communities and families. Second, the humility, courage, and compassion of the Pope, who journeyed such a distance to demonstrate his closeness. I saw before my eyes a shepherd and a pilgrim who came all the way from Rome to the prairies of rural Alberta to help heal the deepest wounds in Canada. These wounds have so often been tragically ignored, hidden, and dismissed. Here we were in the middle of rural Alberta on a rainy Monday morning, in a place that most Canadians hadn’t even heard of, and the leader of the world’s 1.3 billion Catholics had arrived to work for truth, justice, reconciliation, and healing in our country. The successor of Saint Peter came all the way there to move us forward on the path we must take together. It was an experience that brought tears to many of our eyes.

The two-way street of the Good Samaritan

Experiencing all of this first-hand, I couldn’t help but think of Jesus’ parable of the Good Samaritan (Luke 10:25-37). Like the man in Jesus’ parable, Pope Francis listened to the cry of the Indigenous, abused and wounded on the roadside of Canadian society. He refused to be like others who have turned a deaf ear and a blind eye. He insisted on moving forward with our Indigenous brothers and sisters, taking their need for healing seriously and doing something about it. But it was not only Pope Francis who followed in the footsteps of the Good Samaritan in those days. Many Indigenous shared with me that they did not want the Pope to apologize simply as some political formality or legal obligation. Rather, they wanted an apology from the heart, which would touch them in their hearts. They speak of how in order to heal, they need to forgive. This is humbling and inspiring for all of us. Our Indigenous brothers and sisters have a desire to forgive. For so many of them, they wanted the Pope to apologize so that they could forgive the Church. In this way, the Indigenous themselves are like the Good Samaritan, lifting the Church out of the gutter so that together we can walk forward together on the path of healing.

The path of healing for our Indigenous brothers and sisters

I was profoundly moved and deeply struck as I listened to so Indigenous men and women over the course of the Pope’s visit. Their stories and their faces speak of decades of suffering, but also of an undying hope for the future. As one woman said on the day of the Pope’s apology at Maskwacis: “I am grateful to be here today, because so many of my family, friends, and classmates did not make it to see the Pope come to Canada and hear his apology.” Another woman shared that in her remote Arctic community in the Northwest Territories, in the month before the Pope’s visit alone, four young people had committed suicide. These were young fathers and mothers of families, leaving their children behind. The intergenerational trauma caused by residential schools and the abuse suffered by Indigenous has lasting impacts on daily life in their communities to this day. So many of them were taken from their homes. This meant that their parents did not learn how to parent, nor did they. The circle of family life was broken. Yet in spite of this darkness, amidst the scourge of substance abuse and suicide, many of them have been able to persevere, get help, overcome the shadows in their life and look to the light. These survivors are Canadian heroes, with names, faces, friends, and families. We as a country owe them the same respect, commitment, and love that Pope Francis came to show them.

As Canadians, we still have so much to learn about the first peoples who welcomed on their lands the generations of migrants who have followed. So many steps must still be taken in our journey together. Summer 2022 was a two-way street of the Good Samaritan, but the road does not end here. As a Catholic and a Canadian, I am more convinced than ever that we need to take the path of healing and reconciliation seriously if our country is to be a just, human, fraternal society. We cannot keep walking forward without hearing the cries of the wounded. The Pope reached out his arms and the Indigenous responded in kind. It is time that all of us do this. In Jesus’ words: “Go and do likewise” (Luke 10:37).