When the Canadian bishops gather for their annual plenary assembly, it’s fair to say that they’re not overwhelmed with requests for media accreditation. The discussion topics, be they administrative or pastoral, rarely generate much buzz in the nation’s pews. 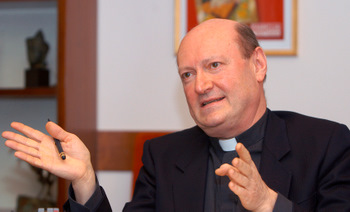 Yet for the past two years, the Canadian Conference of Catholic Bishops (CCCB) plenary has seen some fascinating developments. The revelation about this year’s speakers might end the meeting’s bureaucratic reputation entirely. When I arrived in Cornwall, Ontario to cover the 2008 plenary for S+L, I didn’t foresee the repercussions of that year’s keynote address. The special guest was Phil Fontaine, then the National Chief of the Assembly of First Nations. He called for reconciliation between the Church and First Nations peoples—a plea that resulted in an overture from the Pope months later. In their private meeting in the Vatican, the Holy Father expressed his sorrow for the abuse of aboriginal students in church-run residential schools. A page had turned. One newsworthy decision at the 2009 plenary involved Development and Peace, the bishops’ official international development agency. The CCCB announced that it would collaborate with D&P in an ongoing “process of renewal” in the wake of controversial funding decisions. This year, the guest speaker will be one of the rising stars of the Church: the Italian Archbishop Gianfranco Ravasi. Though he is not yet a Cardinal—a title he is widely expected to receive in an upcoming consistory, possibly as soon as next month—Vatican watchers have already labeled him papabile, a credible candidate to become the next Pope. As the President of the Pontifical Council for Culture, the Archbishop’s title syncs with the plenary’s theme: “Principles of evangelization in contemporary culture”. He is a renowned biblical scholar, well-known public intellectual and best-selling author in his homeland. Last year, his council made headlines for convening a congress to mark the 150th anniversary of Charles Darwin’s “Origin of the Species”. Arguably more than any other event, the congress dispelled the misconception that Catholicism and evolution are incompatible. Islam will also be on the bishops’ agenda. Alia Hogben, Executive Director of the Canadian Council of Muslim Women, will “share interfaith greetings and reflections with the Bishops of Canada”, according to a CCCB press release. S+L will be reporting from the plenary when it opens on October 25th. This year especially, Catholics across Canada ought to pay close attention as their respective bishops head to Cornwall.