Has it been two years already?! 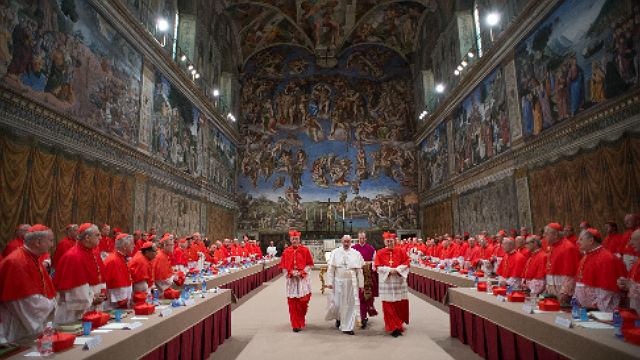 Today it’s not uncommon to hear some form of the following statement regarding the pontificate of Pope Francis: “I can’t believe he’s only been pope for two years, it feels like he’s been around a lot longer!”
This intuition surfaces around anniversaries when people tend to reflect on what Francis has accomplished. Most would agree that he has accomplished a great deal. For me, the past two years have been filled with excitement and expectation. I never know what the Pope is going to do next. And when you’re sitting on the edge of your seat for two years, it’s bound to feel like you’ve been there a lot longer.
Part of this effect comes from the fact that it was all so unexpected. No one could have predicted the kinds of seismic shifts we’ve witnessed, beginning with Pope Benedict’s unprecedented and deeply humble decision to resign. I remember living through that month of uncertainty in 2013 from February 11 to March 13 and thinking that, whatever happened, everything would be different from then on.
I recently consulted my personal journal from the 2013 papal transition. I haven’t read it since the election. The excitement and expectation I refer to is present in the text, and I share part of it with you now to recall and celebrate the election of Pope Francis as the 266th Bishop of Rome and Pope of the Roman Catholic Church.  May the Lord bless and sustain him.

March 13, 2013
Habemus Papam – Pope Francis! It was about 5:30pm when Fr. Tom and I decided to make our way over to CBC where he would do an interview with Peter Mansbridge for the news that evening. But we stopped in at the convent of Maria Bambina, where the CBS was stationed, to get a coffee and warm up. As we were eating in their cafeteria and staring at the TV (there was a permanent camera on the Sistine Chapel chimney during the conclave)… white smoke… Yes, white smoke! We got up and made our way to the CBC tent on top of the Janiculum hill. The bells of St. Peter’s were ringing wildly. We were the only people moving away from the Square—in fact we almost got run over a couple of times by people sprinting in the opposite direction. The excitement and the cheers of the crowd were incredible. We were with Peter and the CBC crew for the waiting period. We expected the new Pope to appear on the balcony within 45-50 minutes. It was much longer than that. It felt like forever. Fr. Tom and Peter were delaying as best they could. Then it happened. When they said his name, “Bergoglio!” Fr. Tom and I just looked at each other in utter disbelief. It was a complete surprise. We knew that his star rose eight years ago at the 2005 conclave, but everybody thought it had since fallen. After all at 76, wasn’t he too old?
The crowd in the square was stunned and there wasn’t much noise between the announcement and Francis’ appearance on the loggia. I don’t think anyone was expecting it, and most people had no idea who he was. My immediate reaction was, “I can’t believe they elected a Jesuit!” That was the topic of conversation between Fr. Tom and Peter live on CBC. And it is a significant factor.
The rest of the night we ran from tent to tent doing interviews: CBS, CNN, back to CBC, BBC. As the hours passed, we realized how significant this decision of the cardinals was. Imagine, the runner-up in 2005 still appealing to the cardinals after so long. What was it about him then and now that was consistant, appealing? Holiness and simple gospel values?
Even his appearance and speech on the loggia were telling. He chose to keep his bishop’s pectoral cross instead of adopting the traditional golden one. Everything he said about himself being elected pope was within the framework of his primary role as Bishop of Rome. I sensed collegiality growing.
I took Fr. Tom to CNN around midnight and he went on live with Wolf Blitzer. He said some things I didn’t expect, but were faithful to the mood of the people in Rome that night: “Pope Francis didn’t follow the book! Thank Goodness!” And then the best line: “He's going to build on the beautiful teaching of Benedict, on the outreach of John Paul II, on the smile of John Paul I, and on that magnanimous heart of John XXII!”
On our way back to the Jesuit house, I said to Fr. Tom, “If you had told me on February 11th that we would have a Jesuit pope named Francis, I would have said it was impossible.”