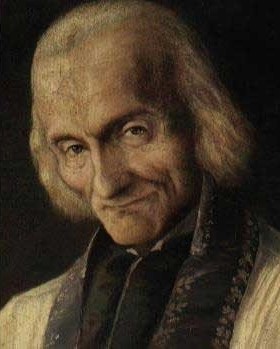 “Who? I don’t know who that is!” So say most of the young people whom I ask about St. John Vianney.
If there’s one thing I can say I admire about St. John Vianney, it’s the complete abandonment of his life to God. Here is a simple man of no intellectual talents to boast of, but he had the greatest wisdom – he knew that he was nothing without God, and he lived his life that way. We see this in how much he valued the transforming power of the Sacrament of Confession, at some point hearing Confessions for up to 18 hours a day. We also see this in the hours he spent in front of the Eucharist preparing for each homily. And yet not too many people know about him. But right after celebrating the Year of St. Paul, Pope Benedict XVI has dedicated June 2009 to June 2010 to St. John Vianney! The Pope also dedicated this particular year as The Year of the Priest, inviting all the faithful to contemplate the theme “Faithfulness of Christ, faithfulness of priests.” And so that we, as a Church, can find out more about St. John Vianney and reflect on his life and priesthood, we have produced the special Catholic Focus episode “St. John Vianney and the Year of the Priest.” You will hear from young and old, priests, lay people, and learn about the Saint Luke Production on St. John Vianney. Take this time to celebrate the priesthood and the gift that it is for all of us. The Year of the Priest begins on June 19th, so tune into Salt + Light on the eve of this Year, Thursday, June 18th at 7pm and 11pm ET for Catholic Focus: St. John Vianney and the Year of the Priest. You can catch the encore presentation Sunday, June 21st at the same times.