I remember rumours that white smoke had been seen, and based on that information me and my friends quickly gathered around the television to see if this was in fact the case. Yes, there was white smoke, and yes Habemus Papam! 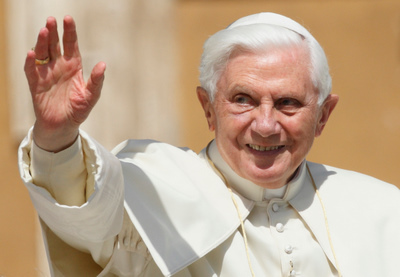 Moments later, when Cardinal Joseph Ratzinger emerged on the balcony as Pope Benedict XVI the room erupted in cheers! (Well, actually it erupted when his name was announced moments before, but it was a sustained excitement!) Five years later, I still think fondly of that spring day. The excitement. The joy. It's hard to believe it's been five years. Three encyclicals, one book, two international World Youth Days, hundreds of addresses, homilies, letters and messages, two Synods, fourteen Apostolic trips abroad, and sixteen pastoral visits within Italy. It's a lot, especially when one considers that Cardinal Ratzinger was looking forward to spending his retirement reading and writing, and living a quiet life! Now, though, like the Apostle Peter, he finds himself in a place that I'm sure he never imagined the Lord would take him! As we have seen in his witness, in the way he has led us these last five years, this humble, gentle grandfather figure is responding "Yes, Lord, you know that I love you." (John 21:17) For answering the Lord's call and for giving this witness, we offer him our thanks, prayers, and love. Happy anniversary, Holy Father! For more reflections and summaries on Pope Benedict's fifth anniversary as Pope: - Photo: CNS photo/Paul Haring