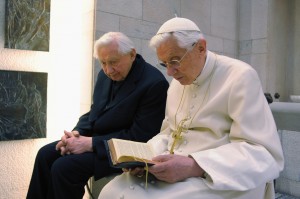 To celebrate his birthday, his 88 year old brother Georg, who was ordained on the same day as Pope Benedict, traveled to Rome so they could spend the week together. A delegation from Bavaria also made the trip, putting on a special performance of traditional Bavarian music and dance and bearing gifts of dark bread, and traditional German cakes. Referring to the music, Pope Benedict said, “this is the sound of my youth.”