On this day in 1901, Blessed Pier Giorgio Frassati blessed the city of Turin, Italy with his birth. Born to an upper-class family, he constantly went against the currents of his culture with the conviction of a true Christian. He never became a great intellectual, or a prolific writer, or the founder of a religious order. His life was that of an ordinary Christian, marked by the simple and sincere pursuit of God’s will each and every day. 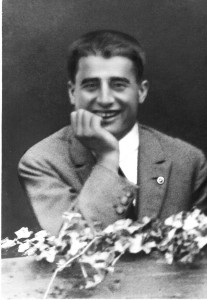 Ever since initially reading about Pier Giorgio two years ago, I knew instantly that he would become a regular intercessor of mine. I was first-and-foremost attracted to him because of his passion for mountaineering, which represented to him both a physical challenge and a mystical union with God. He also saw the need to serve others by making his life into an altar of sacrifice for those in need. At his funeral, crowds gathered that were unknown to his family and friends, but later were identified as all the individuals Pier Giorgio touched through his witness of faith in service and action. The genius of Pier Giorgio was his joie de vivre—his ability to be faithful to the Gospel, yet profoundly love life within rich friendships. Sometimes we convince ourselves that the only way to follow Jesus is through seclusion, by rejecting everything that is enjoyable in this world, whereas Pier Giorgio saw the beauty of fellowship with his Christian brothers and sisters. Finally, what Pier Giorgio and all the saints teach us is how greatly we need each other to grow in holiness. We have within ourselves a coal of faith that burns brightly in some and dimly in others. The saints are the ones to whom we look for examples of fidelity to God and ardent charity towards others; they are the great coals consumed by the fire of the Holy Spirit. When we draw near to these holy men and women and each other, we can only stoke the fire and burn brighter ourselves. The words of the Venerable Pope John Paul II during Pier Giorgio Frassati's Mass of beatification eloquently summarize this way of life:

At first glance, Pier Giorgio Frassati’s style, as a modern young man full of life, seems rather ordinary. Yet this is precisely the originality of his virtue, which invites us to reflect on his life and which encourages us to imitate him. In him, faith and everyday life went hand in hand, so that faithfulness to the Gospel translated into a loving concern for the poor and the needy, which continued until the very last days of the illness that claimed his life. His taste for beauty and for art, his passion for sport and for the mountains, his concern for the problems of society never stood in the way of his constant relationship with the Absolute. Everything was immersed in the mystery of God and everything was devoted to serving others: this is how we can summarize his earthly day!

As it says in the Letter to the Hebrews (10:24), “let us consider how to stir up one another to love and good works.” Let us draw closer to each other and the saints, so that the coal of faith may burn brighter in us all. This post was contributed by Salt + Light intern Lawrence Floucault, 24, of Victoria, B.C.