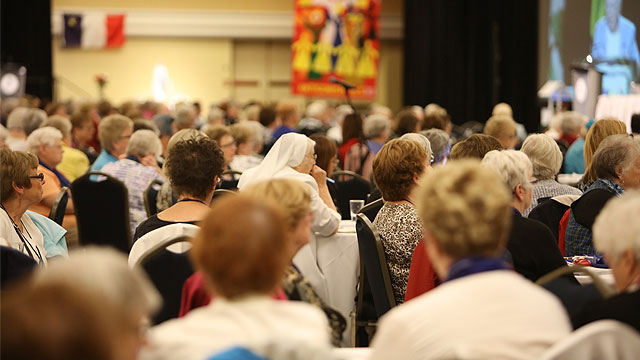 Mary Quinlan was 22 years old when she joined the Catholic Women’s League in her parish in Quebec. In those days, she says, the league had almost two hundred thousand members. From the moment she joined the league she was mentored by other members. “That’s what we did then,” she says matter of factly. Quinlan attended her first national convention in Hamilton in 1966 “because we were hosting it the following year in Montreal, during the Expo year.” Since then Quinlan has attended 50 conventions. She has been a member for 61 years. “I was just thinking about how things have changed” she reminisces. “We used to say we had almost two hundred thousand members. Today we’re under one hundred thousand. We also used to try to keep resolutions (at national convention) down to less than 15.” At the 2016 convention only a handful of resolutions were discussed. Yet the downturn in members does not worry Quinlan. “I think we’re in a valley before a hill,” she muses. Pausing thoughtfully she adds that when she joined the league women tended to marry young and start having children very shortly after. A married woman working outside the home was a rare thing. As a result joining the parish CWL council was appealing because “it was a night out!” she says. “It was something apart from changing diapers. It kept the mind going and because it was the church our husbands didn’t mind,” she states. “But oh boy we had fun” Quinlan says her most memorable convention was the one held in Edmonton in 1974. She had to give a presentation on right to life. Having been mentored by other women and previous diocesan and provincial presidents the presentation went so well she received a standing ovation. But the 1974 was also memorable because then-president Mary Matthews was called away on the first day. Her husband had died unexpectedly. While not all national conventions come with that level of drama, Quinlan says “I tell all members they should experience national at least once.” Quinlan has been a member of the league for 61 years.