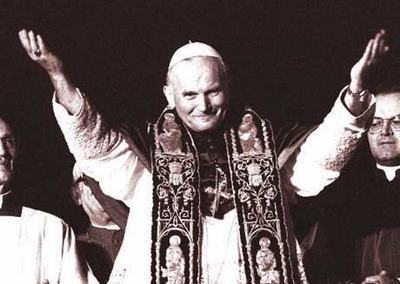 Today's Zoom story about he anniversary of John Paul II 's election as Pope brought back some happy memories. No, I'm not old enough to remember his election. (to be honest, I didn't exist yet). Living in Rome from 2004 to 2007, I discovered how deeply entrenched the image of Pope is in the consciousness of Romans, in particular this Polish Pope. With the exception of Pope Adrian in 1520, up until the moment John Paul II stepped out onto the loggia of St. Peter's, the Bishop of Rome had been an Italian - in many cases even a Roman. Yet on that dark autum night this man named Wojtyla was introducing himself to his new flock.Today, communication experts in the church speak of this moment as the greatest example of effective mass communication. Wojtyla gave the crowd a moment to absorb the shock of his non-Italianness, then greeted them with "blessed be Jesus Christ," a traditional greeting used by parish pastors in the country when they encountered a member of their parish. With this greeting he established himself as a priest, above anything else, despite the white robe.  The crowd, despite their apprehension over this non-Italian Pope, responded in kind.  At the sound of his voice, clear and confident, speaking in their native tongue, the Roman crowds went wild. There was something in his voice, in his secure stance before the immense crowds, that told the gathered faithful something big had just hit the Church. As he got more comfortable he stepped closer to the balcony's edge and placed his hands on the ledge, leaning out over crowds as if trying to join them, even from high above St. Peter's square. Then he delivered the lines that cemented Rome's love affair with their new bishop: he told the crowd he was afraid of accepting the nomination but ,in the spirit of obedience to the Lord and with trust in Mary (Italians are of course big on Marian devotions), he accepted. He told the faithful he was afraid that he might not be able to express himself clearly in their Italian language, then stopped and corrected himself saying, "in our Italian language." Before the Romans could make more noise he added the phrase that went down in Roman history, "se me sbaglio mi corrigerete," meaning "if I make a mistake you'll correct me." It was done. With that admission of humility, demonstrated willingness to embrace the Italian language, and the double entendre that signified his willingness to hear the voice of the faithful, Rome accepted their new pastor.Despite the low quality video (by today's standards), that clip still gives me goosebumps whenever I watch it. One year after John Paul II had passed away, I had to watch that clip during a class on Communication and Religion.  We were supposed to analyze the clip to understand just why it is such communicative genius. I don't think anyone sitting in the lecture hall that day was able to focus enough to analyze it. As most of us in that class were either too young to remember the election, or simply weren't around yet when it happened, for many it was the first time watching it in it's entireity. Suddenly his entire pontificate made sense. If you've never seen the clip of John Paul II's first appearance as Pope, and if you understand Italian, I think today is a good day to do a Youtube search.