Grieving for Libya: A consistent ethic of life 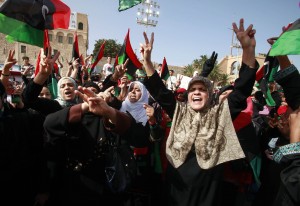 How should I feel when hearing the news of the death of Muammar Gaddafi? I am not a Libyan. I do not have any friends from Libya. All I know is what I hear in the media and what I’ve been hearing in the media about Libya and Gaddafi for the last 40 years.
Part of me is happy for Libyans who have been yearning for this moment for so many years. It is not unlike what we went through in Panama after 20 years of military dictatorship. After a brief military intervention on the part of the U.S., Manuel Noriega was arrested and taken away. That was reason to celebrate. And, in no way can we compare Noriega with Gaddafi. But Noriega was not killed. Had he been, I don’t know if I would have celebrated in the same way. I don’t know if I would have celebrated at all. And that’s how I feel today. Yes, a part of me wants to be happy for the change in Libya. But a larger part of me wants to grieve. I want to grieve because a life has been lost. I want to grieve because of all the lives that have been lost. I am sad that this loss of life gives people reason to celebrate. If we are going to call ourselves pro-life, we need to be for life in all aspects of life. We can’t only be concerned about abortion, as important as that issue is. Don’t get me wrong, we have to be outspoken about abortion and rallies like the Defund Abortion Rally yesterday at Queen’s Park in Toronto are important. We must let our politicians know how we feel about our tax dollars being used to pay for abortion on-demand. We must go to the National March for Life in Ottawa and let our politicians know that not all Canadians are OK with our current state of abortion-legal-limbo. (Many people don’t know that there is no abortion law in Canada. People say that they don’t want the debate re-opened, but it’s never been closed.) We have to be able to have that conversation with our friends and family members. But we also have to be able to speak on behalf of the elderly and the disabled. Are you able to speak against euthanasia and assisted suicide? Are you able to speak out against capital punishment? Are you able to explain that loss of life is a terrible thing -- all life? It doesn’t matter if that life is not legally considered a person with rights, or if that life is not considered valuable, or whether we think that this person has anything to contribute to society. It doesn’t even matter if that person is responsible for horrible crimes against innocent people. It doesn’t matter if that person is responsible for crimes against you. When Osama Bin Laden was killed, I was perplexed by President Obama’s comment about not losing sleep over the possibility of killing him. Regardless of what someone may have done, we should always lose sleep over the possibility of taking their life. Life is not ours to give or to take. So, as we go about our pro-life activities, let’s not just think about abortion, euthanasia or capital punishment. Let’s think also about changing the minds of people who believe that under certain circumstances it is OK to take a life -- any life. It may be necessary and justified, but it’s never OK and it’s always a reason to grieve. - Photo credit: CNS photo/Suhaib Salem, Reuters