And so begins my trip to the emerald isle. A six and a half hour flight to Dublin and a three-hour bus trip brought me to Dundrum, Northern Ireland.
I must say that I have never before seen a place quite like this. A ride through this country is like a 10-course feast for the eyes. Everything is beautiful and intriguing in its own way. Modern buildings and quaint homes line the cities, intermixing with older building and ruins from centuries before. The landscape is lush and full of history from a time that I can only  now read about. I think the locals on the bus thought I was crazy because I kept smiling ear to ear and taking photos through the glass of things we passed along the way, I got a kick out of seeing all the sheep, goats, horses and cattle I saw riding up. The fields are full of these beautiful farm animals, it’s really like something out of a movie. I wanted to jump off the bus and go play with the sheep, but I restrained myself... I could not a dreamed up a more picturesque setting. 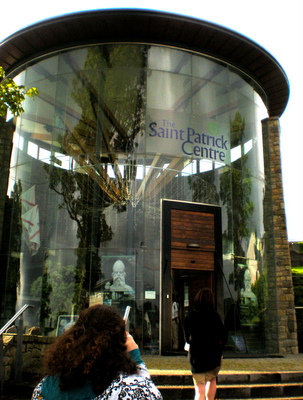 When I presented my passport to the customs officer in Dublin he asked me where I was going. I told him that I’d be at the St. Patrick Centre in Downpatrick. He said “What’s that?” I said, 'it’s a museum where St. Patrick is buried". He replied “Oh wow, I didn’t even know that!” This was my first clear indication of the divide between the Republic or Ireland and the North. The people of the Republic are in many ways as unaware of the North as people in other nations like Canada would be. A place like the St. Patrick Centre really  does need the attention and recognition on a much larger scale than it presently has. Although the people do speak English, I’ll tell you, when asking for directions, sometimes it felt like we were speaking two different languages. Some of the people I came into contact with spoke very quickly with an accent and words that aren’t typical of the Canadians vernacular. I must say though that I love love love the Irish accent and hope I develop one in the span of my stay here! So my luggage and I finally made it to the charming little cottages in the town of Dundrum, about a twenty-minute drive away from St. Patrick. The other Young Ambassadors who had arrived on an earlier flight from the United States greeted me. We are all girls, except for one, Ryan who will have to put up with this estrogen-fueled bunch for the next two weeks, he’s doing very well so far. The other Ambassadors are from Milwaukee, Minnesota, Pittsburgh, Chicago and Wisconsin. My roommate Andrea is studying non-violence, peace processes and philosophy in college, so I can think of no better place for her to experience what she’s learning in the classroom than here in Northern Ireland where the peace process is such an active presence and force. Once we all got acquainted and I unpacked, we were picked up by a small bus to head over to the St. Patrick Centre, it was everything I had hoped it would be after seeing the website and speaking with it’s Director, Dr. Tim Campbell. It is a beautiful modern building, with a glass façade, it has a mythical, fairytale-like architectural feel to it. When I walked inside I felt very welcomed and at home, it has a warmth about it. The founders and organizers really have created an extraordinary place for the people of the community to meet and learn about St. Patrick. Although the Centre’s restaurant, the Daisy Café was closed for the night, I could tell by the photos on the wall that is a fantastic operation. The Daisy Café employs young people with learning disabilities and gives them an opportunity to work and partake in other activities like mountain climbing! We were greeted with a barbecue by the Friends of St. Patrick, in attendance were clergy members, some of the locals, several municipal politicians and a 5-piece string and drum band playing lovely music for our arrival. It was a very humbling moment to see that all of these people had come just to meet and greet us. We proceeded to the Centre’s peace garden, a beautiful garden full of flowers, and fresh herbs like lemon herb and lavender (we took some to put in our pillow cases to help us sleep) There we were led in prayer by two priests, one Catholic and one Protestant who are both good friends. They blessed us and we prayed the Our Father in that peaceful setting. Some of the ambassadors brought rocks with their names on them to leave in the garden. Then we went to join the barbecue. Everyone there was curious about us. They wanted to know where we were from, how we’d heard about the place and how we had come to be there. As soon as I said I was from Canada people’s eyes just lit up. Many people there had been to Canada and shared their memories with me about visiting Vancouver, Alberta, Quebec and Ontario. I met so many interesting and kind people that I spoke with at length about topics that varied from health care in the US vs. Canada, Protestant/Catholic relations, the funeral of Pope John Paul II, Italian opera, to of course, St. Patrick and the Centre. They were very interested to hear about Salt + Light and asked me if they could get it on their SKY satellite, I said not yet! But that they could see some of our programming on the website, or watch us online. I met a woman who used to work as a photojournalist and photographed the funeral mass of John Paul II at the Vatican. She said that she didn’t have a press pass, but she went armed with her camera and succeeded in capturing hundreds of photos. I hope I get to see them before I go! 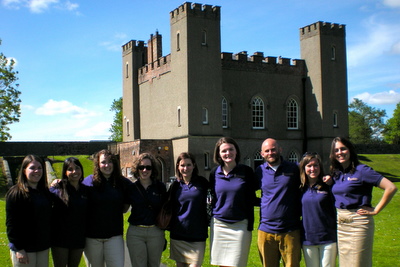 For day two we visited the town of Moira where a local hunting, agriculture and food fair was happening. It was a great chance to mingle among local Northern Ireland people and see some interesting and very cute animals, like owls and hawks. I even tried my hand at archery, it wasn't a smashing success, but fun all the less. Then Dr. Tim Campbell took us to Hillsborough, a beautiful town in the County Down district. Hillsborough castle is the official Irish residence for Queen Elizabeth and she holds her famous garden parties there as well. Overall it's been a great first two days and I’m excited for what's next.  On Tuesday I begin my placement with the BBC so stay tuned for details from my first day! Peace and love from Northern Ireland.