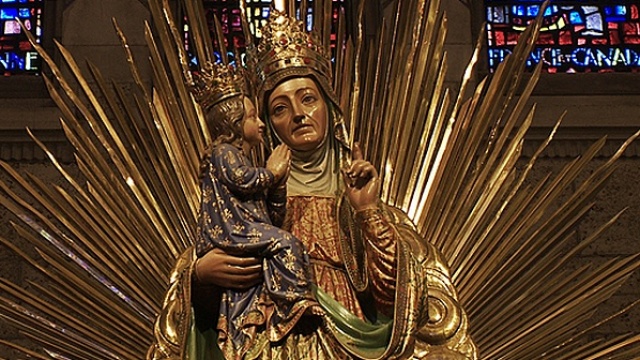 Trisha Villarante - Guest Blogger
I recently took a trip to Québec City where rich history and beautifully restored buildings attract millions of visitors each year. Especially this year, with the first ever Holy Door outside of Europe and Québec’s two newest saints! I delighted at the shrines of newly canonized St. Francois de Laval and St. Marie de L’incarnacion, both of whom I had the privilege of writing about for this blog back in April. It was a joy to witness the city celebrating their sainted citizens. Yet, although flags with their images proudly hung off of lamp posts, banners of congratulations draped along buildings and other paraphernalia around town, there was another Saint that stole my attention. In nearly every church, basilica or cathedral, some sort of devotion to St. Anne, the Mother of Mary, could be found. I saw her both discreetly and indiscreetly represented in paintings, placed perfectly in stained glass windows or even full fledged figures of her and our Lady. Little did I know I was 20 minutes away from the Shrine of Sainte Anne de Beaupré. Where, as I type this post, there are thousands of pilgrims in the midst of novena prayers leading up to her Feast day, July 26th. Patron Saint of Québec It is said that sailors making their way to Québec City often ended up ship wrecked on the St. Lawrence River. So, in devotion to St. Anne they built a church to remain under her protection, as she is the patron saint of sailors. From there, devotion to her spread throughout Québec, which eventually resulted in what is the biggest Shrine of St. Anne; the Basilique Sainte Anne de Beaupré. After the 8th century, devotion to her grew in the West while she was very popular in France at the time of the settlement in Québec. The first church in 1658 was built to house the miraculous statue of St. Anne. Then, in 1876, St. Anne was appointed the patron saint of Québec. She holds many positions as an intercessor. Among her many offices she is also the patron saint of: Mothers, Grandmothers, Unmarried Women, Infertile Women, Cabinet-Makers, and Miners. Good St. Anne, Intercessor Extraordinaire If one were to look for stories of Good St. Anne’s intercessions they wouldn’t have to look very hard. In my search I happened upon a bi-monthly publication called, The Annals of St. Anne, which has been in publication in Québec since 1861. In these records of events, you will find beautiful entries of her favours. My personal favourite is of a couple who had been trying to start a family for ten years. As an act of faith, the couple made a pilgrimage to the shrine asking to conceive a child. While they were there the wife spoke to a priest and attended the sacrament of reconciliation. Ten days later the couple was pregnant. This is just one small account of the millions of favours that have been received through St. Anne’s intercession around the world. In fact, at the Basilique Saint Anne de Beaupré there is a wall covered with thousands of crutches that have been left behind by people who arrived with them and then departed, no longer needing them. Also, there is as an entire chapel filled with ex-voto items from pilgrims expressing their gratitude for her intercession. So, why not have devotion to St. Anne? As the mother of our Lady and the grandmother of Jesus, we’re automatically her grandchildren. We’re predisposed to be partial to her and her to us. Just like any good grandmother, when asked for something, her generous heart will most likely provide more than requested. Festivities for her Feast Day Canada is one of the only places in the world where devotion to St. Anne is so widespread. On July 26, I will be in the West Coast, among the many celebrating the Mother of Our Lady, Our Grandmother. However, if you’re in Québec take advantage of the festivities happening at the Shrine! The place to be is the Basilique Sainte-Anne-de-Beaupré (10018, Avenue Royale) where for over 350 years they have held a tradition of a special novena to St. Anne. These novenas happen continuously throughout the day and on July 26th, her Feast Day is celebrated in grand measure. At the basilica not only will you enjoy a vast collection of art, paintings, mosaics, sculptures, and stained- glass windows, you will also learn more of the role St. Anne had in the history and faith of the people of Québec. If I were back in Québec, I wouldn’t miss it! Trisha Villarante