I have recently experienced the awakening of my Canadian identity. And the timing couldn’t be better. Happy 143rd Birthday, Canada! 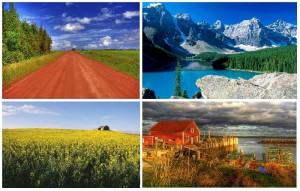 I’d like to point out here that the number 143 is traditionally associated with the words I=1 LOVE=4 YOU=3; this brings me right back to junior high. But I couldn’t help myself. Numbers speak. But back to my awakening. Recently, I spent some time in Winnipeg for the World Religious Leaders’ summit. The experience was moving. If you didn’t catch our daily reports from last week, you can see them (and any other past edition of Perspectives daily or weekly) here. Even though we were working long hours with very little sleep, I remember internalizing many of the encounters with the delegates. Out of all of them, though, I found that my encounters with the aboriginals were especially inspiring. Like many other young Canadians, I was presented with the early story of our nation. In class, we learned about the Europeans’ quaint arrival (see one version here) and the “welcoming party” that ensued. We learned about the seasonal diets and hunting patterns of “les autotochtones” in the Canada of old. What wasn’t completely communicated in our months of study, however, was the dramatic collision of worlds that eventually gave birth to this great nation. Canada’s birth was not an easy one. And Canada’s beauty, I’m learning, is intensified with the knowledge of the labour pains that preceded its birth. On the opening night in Winnipeg, David Courchene of the Anishnabe Nation, Eagle Clan addressed the Summit and told them a little bit about the painful reality of Canada’s aboriginals. He told us about his vision for the future of Canada and the reconciliation and harmony he sees on the horizon. The next day, we were addressed by Justice Murray Sinclair, the chair of the Truth and Reconciliation Commission. Truth and Reconciliation is a new Canadian initiative whose mandate states that: “the truth of our common experiences will help set our spirits free and pave the way to reconciliation.” Justice Sinclair told us about the residential schools whose primary focus was to “kill the Indian in the child”. His stories were alarming but his approach was admirable. He, like Mr Courchene, looks forward to Canada’s rebuilding; beginning within Canada’s native families. On the last night of our stay in Winnipeg, we were invited to an extravagant dinner in the Winnipeg Art Gallery (WAG). Aside from feeling entirely unworthy to be sitting among world religious leaders and some of the most humble spiritual giants I have ever met, we were sitting in a building whose chief purpose was to “remember” and to celebrate the past, despite its imperfections. On the walls surrounding us, Stephen Harper’s 2008 apology to our nation’s aboriginals was papered on the whole height of the wall in three-foot letters. The display said the following:

Mr. Speaker, I stand before you today to offer an apology to former students of Indian residential schools. The treatment of children in Indian residential schools is a sad chapter in our history. In the 1870s, the federal government, partly in order to meet its obligation to educate aboriginal children, began to play a role in the development and administration of these schools. Two primary objectives of the residential schools system were to remove and isolate children from the influence of their homes, families, traditions and cultures, and to assimilate them into the dominant culture. These objectives were based on the assumption aboriginal cultures and spiritual beliefs were inferior and unequal. Indeed, some sought, as it was infamously said, `to kill the Indian in the child.' Today, we recognize that this policy of assimilation was wrong, has caused great harm, and has no place in our country. Most schools were operated as `joint ventures' with Anglican, Catholic, Presbyterian or United churches. The Government of Canada built an educational system in which very young children were often forcibly removed from their homes, often taken far from their communities. Many were inadequately fed, clothed and housed. All were deprived of the care and nurturing of their parents, grandparents and communities. First nations, Inuit and Metis languages and cultural practices were prohibited in these schools. Tragically, some of these children died while attending residential schools and others never returned home. The government now recognizes that the consequences of the Indian residential schools policy were profoundly negative and that this policy has had a lasting and damaging impact on aboriginal culture, heritage and language. While some former students have spoken positively about their experiences at residential schools these stories are far overshadowed by tragic accounts of the emotional, physical and sexual abuse and neglect of helpless children and their separation from powerless families and communities. The legacy of Indian residential schools has contributed to social problems that continue to exist in many communities today. It has taken extraordinary courage for the thousands of survivors that have come forward to speak publicly about the abuse they suffered. It is a testament to their resilience as individuals and to the strength of their cultures. Regrettably, many former students are not with us today and died never having received a full apology from the government of Canada. The government recognizes that the absence of an apology has been an impediment to healing and reconciliation. Therefore, on behalf of the government of Canada and all Canadians, I stand before you, in this chamber so central to our life as a country, to apologize to aboriginal peoples for Canada's role in the Indian residential schools system. To the approximately 80,000 living former students, and all family members and communities, the government of Canada now recognizes that it was wrong to forcibly remove children from their homes and we apologize for having done this. We now recognize that it was wrong to separate children from rich and vibrant cultures and traditions, that it created a void in many lives and communities, and we apologize for having done this. We now recognize that, in separating children from their families, we undermined the ability of many to adequately parent their own children and sowed the seeds for generations to follow and we apologize for having done this. We now recognize that, far too often, these institutions gave rise to abuse or neglect and were inadequately controlled, and we apologize for failing to protect you. Not only did you suffer these abuses as children, but as you became parents, you were powerless to protect your own children from suffering the same experience, and for this we are sorry. The burden of this experience has been on your shoulders for far too long. The burden is properly ours as a government, and as a country. There is no place in Canada for the attitudes that inspired the Indian residential schools system to ever again prevail. You have been working on recovering from this experience for a long time and in a very real sense, we are now joining you on this journey. The government of Canada sincerely apologizes and asks the forgiveness of the aboriginal peoples of this country for failing them so profoundly. We are sorry. In moving towards healing, reconciliation and resolution of the sad legacy of Indian residential schools, implementation of the Indian residential schools settlement agreement began on September 19, 2007. Years of work by survivors, communities, and aboriginal organizations culminated in an agreement that gives us a new beginning and an opportunity to move forward together in partnership. A cornerstone of the settlement agreement is the Indian Residential Schools Truth and Reconciliation Commission. This commission presents a unique opportunity to educate all Canadians on the Indian residential schools system. It will be a positive step in forging a new relationship between aboriginal peoples and other Canadians, a relationship based on the knowledge of our shared history, a respect for each other and a desire to move forward together with a renewed understanding that strong families, strong communities and vibrant cultures and traditions will contribute to a stronger Canada for all of us. God bless all of you and God bless our land. (Prime Minister Stephen Harper, June 11, 2008)

After 150 years of residential school trauma, I can’t imagine how it must have felt to have your pain acknowledged. This admonition and contrition is not only good news for our country’s aboriginals, but for all of us. A country that can acknowledge its mistakes and shortcomings is a country on the way to becoming stronger. I always felt proud of Canada. Anne of Green Gables. Our rugged coastlines.My Acadian heritage. The Rocky Mountains. Michael Ondaatje. The Group of Seven. Shania Twain. Hockey and….of course…the telephone. We laugh about it, but Canada has decidedly made a quiet yet powerful impact on the world. But now, after seeing a bit of Canada’s weaknesses and learning a bit more about one facet of her rocky beginnings, I love Canada even more. After all, vulnerability is lovable. For the first time I see us for what we are instead of for what we are not. We still have a lot of work to do and I pray we will not rest until all of Canada’s vulnerable are protected. The way in which we treat our nation’s elderly, our poor, our intellectually-challenged brothers and sisters and also those Canadians who are still in their mother’s wombs is the litmus test of our nation’s strength. In his address at the summit last week, Justice Murray Sinclair said: “a society’s strength is based on the standard of its weakest members not on that of its strongest”. This approach, he emphasized, is the only sure way to making progress and to becoming stronger. We must not be afraid to admit we were wrong. We must not be afraid to apologize. This Canada day, I rejoice that, with God’s Mercy we are all given a second chance to right our wrongs and to rejoice in our heritage. Sts. Jean de Brebeuf, St. Marguerite Bourgeoys, Blessed Kateri Tekakwitha, and Blessed Brother André , pray for us and for Our Canada! P.S. Check out these beautiful videos that were produced in honour of the 400th anniversary of Grand Chief Membertou's baptism; the first Native baptism on Canadian soil!