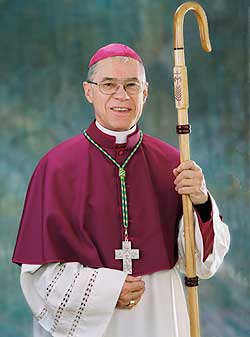 Let me tell you story of a little town, in a place far, far away that is often forgotten. This place is called Vancouver. Okay, so it's not a town, and it is certainly not that forgotten. But let me tell you a story about Vancouver anyway. Back in 2004 Vancouver received as their Archbishop, Raymond Roussin. He was courageous in taking his battle with clinical depression public and showing the faithful, and the people of Vancouver, that there is no stigma in battling depression. He recovered and was able to lead the Archdiocese admirably, even valiantly. For example, in 2006 he successfully lobbied against telecommunications giant Telus' attempts to make pornography available to clients via their cell phone.
From the very beginning Archbishop Roussin had the respect of his flock, yet he knew that in order to lead a church like the one found in Vancouver, he needed help. So it was that he asked the Vatican for help in a Coadjutor Archbishop, a very close collaborator and a second in command, who would assist him. As is custom, the Coadjutor would also take over when the current Archbishop retires. The Vatican took one look at Vancouver and decided to bring out the big guns. (Remember, by this time Vancouver had already been awarded the privilege of hosting the 2010 Winter Olympics) In the summer of 2007 Pope Benedict XVI tapped Archbishop Michael Miller to help Roussin on the West Coast. Miller was the very definition of a big gun. At the time he was serving in Rome as Secretary to the Vatican's Congregation for Catholic Education (he was like the Deputy Minister of Catholic Education for the Pope!) Prior to that he was the president of the Basilian Fathers' University of St. Thomas in Houston, Texas.In August of 2007 Vancouver welcomed Archbishop Miller to town and they hit it off from day one! For nearly the last year and a half the two have worked together to guide Vancouver's flock. In 2008 Archbishop Roussin decided he was ready to retire. He submitted his resignation to the Pope and on January 2, 2009, the Feast of St. Basil, Pope Benedict accepted Roussin's resignation. That meant Archbishop Miller would automatically took the reins of the Archdiocese of Vancouver. 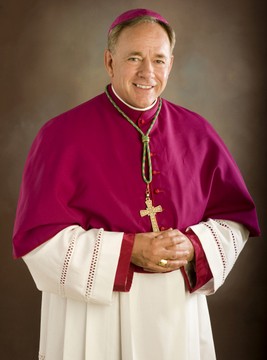 Salt + Light has been friends with Archbishop Miller for some time. He is a Basilian priest, like our own CEO Fr. Thomas Rosica. Salt+Light televised Archbishop Miller's Ordination to the Episcopacy in January 2004. The following day Fr. Rosica interviewed Archbishop Miller at his Vatican offices of the Congregation for Catholic Education. Miller is also a graduate of the University of Toronto, and has spoken at the Newman Centre of Toronto in 1998 and again at UofT's St. Michael's College several years ago. When Archbishop Miller's appointment was announced on January 2, there was much rejoicing among the S+L staff for both Archbishop Roussin, a great friend of Salt + Light who now begins a peaceful retirement, and for the new Archbishop. Vancouver is my home Archdiocese; I was born and raised there and follow the goings on in the city and the church there through friends and through the award winning B.C. Catholic newspaper, and I was delighted!I had the privilege of meeting with Archbishop Miller in December when I was home for Christmas and was immediately struck by the presence he emanates. Someone had mentioned to me "he has a great, great, intellectual capacity and you notice it right away." That was an understatement! The Olympic city is in excellent hands and Archbishop Miller takes over an archdiocese in great shape, thanks to the series of fearless leaders up until now.Fr. Rosica will lead a Salt + Light team to the west coat this weekend as we film the Mass of Thanksgiving celebrated by Archbishop Miller at Vancouver's Holy Rosary Cathedral. Because technically control of the Archdiocese passed into his hands as soon as the Pope made the appointment on January 2, Sunday's celebration is a Mass of Thanksgiving and not an Episcopal Ordination or installation Mass. And God knows how much we are grateful for the ministries of both Archbishops Roussin and Miller!Salt+Light will be airing Archbishop Miller's Mass of Thanksgiving on Friday January 30th at 8:30pm Eastern time (that's 5:30 pm, Pacific time) with a repeat at 12:30 am Eastern time (that's 9:30pm Pacific time) and again Saturday January 31st at 1:30 pm Eastern (11:30am, Pacific).