Global challenges can bring Christians together 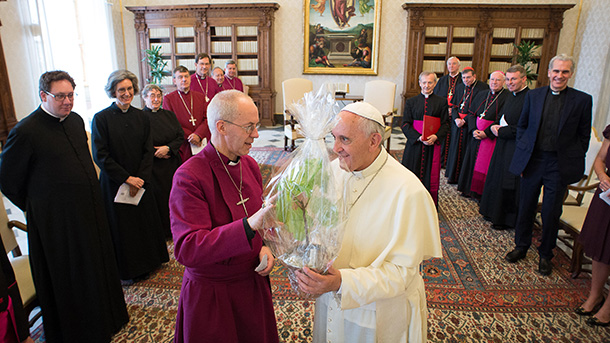 Next week Christians celebrate the Week of Prayer for Christian Unity. The important celebration dates back to 1908 and was inspired by Fr. Paul Wattson and the Franciscan Friars of the Atonement in Graymoor, New York.
More advances along the road to unity have taken place over the past century than over the previous 350 years. In our Catholic history, we can point to the Second Vatican Council of the 1960’s as the watershed moment that brought the Catholic Church officially into the ecumenical movement.
Since then, more progress has been made. But there are also key challenges in the ongoing dialogue. Issues especially relating—not to questions of salvation, but rather morality—continue to divide Catholics and some mainline Protestant churches. Just this week the Primates of the Anglican Communion are meeting in Canterbury to discuss—among other important topics—homosexual relations; a discussion that could divide the Anglican Communion and affect the ongoing Anglican-Roman Catholic dialogue.
Apart from such issues, the current global reality presents significant challenges to all the Christian churches. The refugee crisis, the widespread persecution of Christians and the ecological crisis demand the attention of the churches and a deeper reflection on the importance of unity today.
Ecumenism is not easy, but it is necessary, since, as the Second Vatican Council articulated, “Such division openly contradicts the will of Christ, scandalizes the world, and damages the holy cause of preaching the Gospel to every creature.” (Decree on Ecumenism, 1) So the work continues. 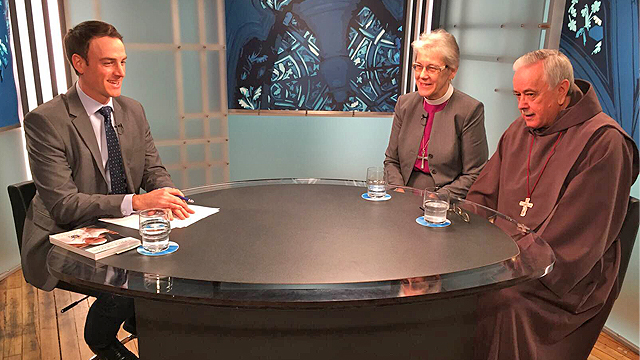 (In studio: guest host Sebastian Gomes with ecumenical experts Bishop Linda Nicholls and Fr. Damian MacPherson, SA)
This week in a special episode of Perspectives: The Weekly Edition, we examine where the ecumenical discussion stands today. Guests include Bishop Linda Nicholls, area Bishop for Trent-Durham and Co-Chair of the Anglican-Roman Catholic Dialogue in Canada, and Fr. Damian MacPherson, SA, Director for Ecumenical and Interfaith Affairs for the Archdiocese of Toronto. Topics discussed include the recent history of the Anglican-Roman Catholic dialogue, the common challenges facing the churches today, and the influence of Pope Francis on the ecumenical movement.
For the Week of Prayer for Christian Unity, be sure to check out the "Did You Ever Wonder?: Small Answers to Big Questions" initiative recently put together by the Anglican-Roman Catholic Dialogue in Canada.
And for those in the Greater Toronto Area, an ecumenical prayer service will be held at Good Shepherd Chaldean Catholic Cathedral on Sunday, January 24, 2016 at 4:00pm. The homilist will be Cardinal Thomas Collins. Also present will be Anglican Archbishop Colin Johnson, Chaldean Catholic Bishop Emanuel Shaleta, Evangelical Lutheran Bishop Michael Pryse, and other city-wide religious leaders.