Gifts given by Pope Francis in Bulgaria and North Macedonia 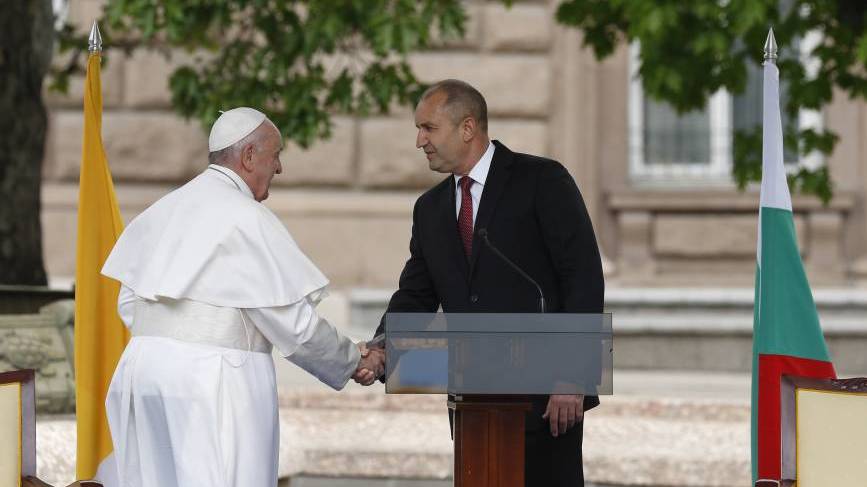 Here are the details of gifts given by Pope Francis during his Apostolic Journey to Bulgaria and North Macedonia. Text courtesy of the Holy See Press Office. 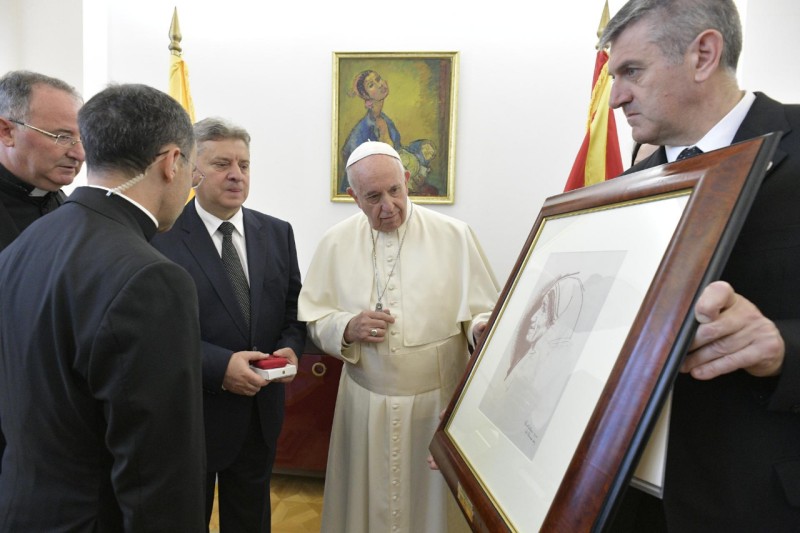 Pope Francis presents a gift to the president of North Macedonia. (Vatican Media)
Print on canvas depicting Mother Teresa, realized by the Vatican Typography. Gift offered to the President of the Republic. The portrait was realized to raise funds for the charitable activities of Mother Teresa by Moede Jansen (Osnabruck 1921-), painter, portraint artist and designer, who decided to donate the portrait of the saint to the Vatican Library, along with an important group of drawings by her hand, which probably constitute the most important component of her artistic activity. The print on canvas is a reproduction by the Vatican Typography, produced for the Apostolic Trip to North Macedonia.   Majolica of Madonna with child. Gift offered to the Sisters of Mother Teresa. This elegantly-produced majolica basrelief was made by the master potters of Impruneta in the Chianti region, following the styles typical of traditional representations of the so-called “Madonnas of the Davanzale”, or window-sill, a model that has formed part of the classic production of the Florentine area since the 16th century. In this area of Tuscany, the use of clay for the creation of artistic artefacts dates back to the year 1000, when production of terracotta objects for building purposes began to develop industrially on the clay soil hills around one of the most important and probably oldest Marian shrines in Italy. Soon the artistic furnishing items were joined by devotional plaques such as this one, which were incorporated in the walls of houses, to protect their inhabitants. This devotional plaque in majolica has, however, a very particular and interesting iconography, not only because the Virgin Mary shows the Child as the “way of salvation”, but because that crown of fruit that frames the entire representation underlines the certainty, rather than the hope, of the continuous rediscovery of life through Christ which, to cite Revelation, is the “beginning and the end” of all things (22, 13-21). 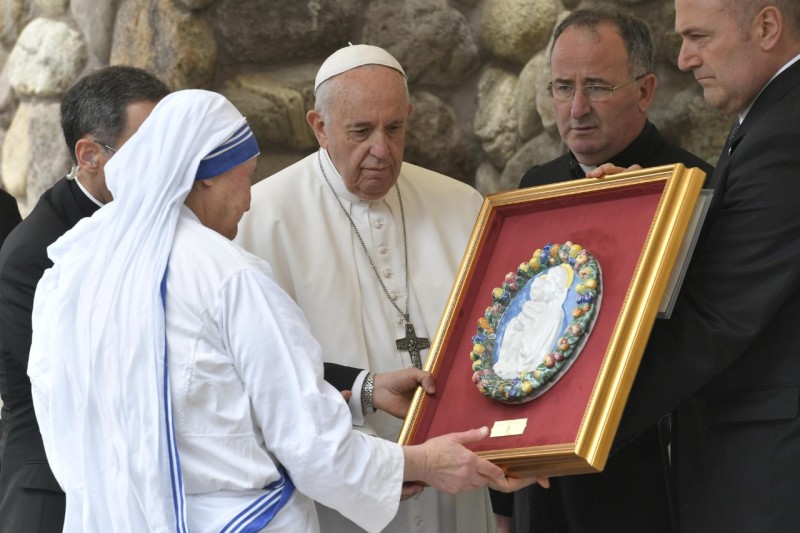 Pope Francis presents a gift to the Sisters of Mother Teresa. (Vatican Media)
Bronze: “Bud of Peace”. Gift offered to the Bishop’s Residence. This elegant bronze panel, entitled “Bud of peace”, is a sketch for a monumental door to be erected in a church dedicated to St. Francis. On closer inspection, in fact, the triple line of praying figures positioned inside the so-called “mandorla” are none other than Franciscan nuns and friars in a prayerful attitude, facing the heraldic symbol of Franciscanism itself, represented above inside a shining star: or rather, that “conformity” in which the arm of Christ appears crossed with the arm sleeved in the brown habit of St. Francis, with the cross in the background and with both hands showing the stigmata. The symbol of “conformity”, representing that inseparable “pact” between St. Francis and Christ the Saviour, appeared for the first time in the Basilica of Assisi around 1490, during the generalate of Francesco Sansone, although without the Cross. The latter appeared instead in the Franciscan coat of arms only in 1513, when Fra Bartolomeo da Pisa’s famous treatise De conformitate vitae Beati Francisci ad vitam Domini Jesu Christi was published.