Getting things done as only women can 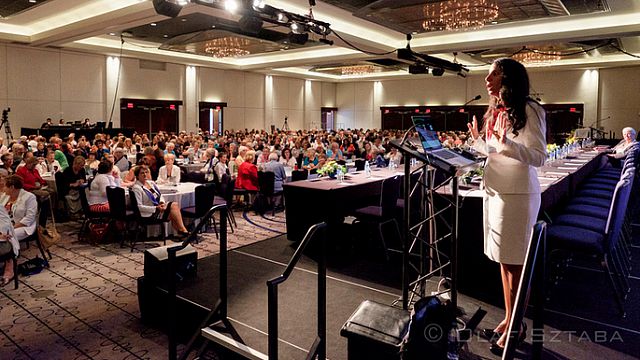 In Abu Dabi in 1993, there was one Catholic Church. The work week in the Arab Emirate was Sunday to Thursday. For Jacqueline Nogier and her husband - both Catholic teachers who were working in Abu Dabi- that meant going to church after work on Sundays. This was Nogier’s life for two years. It taught her that it is possible to live one’s faith quietly and have it play a central role in one’s life. Still, when she returned to her home to Canada she couldn’t stop herself from jumping in feet first and getting involved in something that would allow to her live her faith openly, on a daily basis.
Home was Snow Lake, Manitoba, a town of just over 900 people located 684 kilometres north of Winnipeg, with an even smaller Catholic population.
Nogier says on the one Sunday a month when Mass is available, an average of 15 people attend. That means when something needs to be done “If everybody doesn’t help, nothing happens” she says. This sense of responsibility towards her community, and the need to live her faith in way she had not been able to while abroad resulted in Nogier taking some decisive action.
In 1997, shortly after returning to Canada, “I turned to my Mom and said let’s join the CWL (Catholic Women’s League) together” Nogier recalls.
“Mom” is Ella Nogier, a retired grade two teacher with a sharp wit, contagious smile, and abundant energy that she channels into whatever needs to be done.
Recalling how she joined the CWL Ella Nogier states, “there was a council in our parish, but many members didn’t go to meetings and the president ended up having meetings by herself. So my daughter and I decided we had to help her out.”
That might have been the catalyst, but joining the league gave Ella Nogier “something to do with my daughter” and fellowship with other Catholic women. “It is amazing to be with people that pray the same prayers as you. They know the Hail Mary. Not everyone [in Snow Lake] does.”
The female fellowship Ella and Jacqueline experienced in their council ignited a flame that kept growing. Jacqueline says “I didn’t want my growth and my learning to stop.” So Jacqueline accepted position on the provincial executive council, “and I pulled my mom along.”
Jacqueline also “pulled” her sister Melissa along into the league. “I found something cool and I wanted to share it with my Mom and my sister,” she recalls. And so it was that Melissa Nogier joined the CWL 15 years ago.
Her contact with the league went back to her teenage years when her mother signed her up to serve at the annual tea. Melissa says at a certain point “I realized I can’t expect women my mom's age to continue [their work] forever.”
Her increasing exposure to the work of the CWL through her mother and sister’s involvement opened Melissa’s eyes to the needs that the league tries to respond to at the parish level. She joined the league, signing up in the same council as her mother and sister, and started taking on more and more responsibility.
Six years ago Melissa moved to Vita, Manitoba and discovered that her parish did not have a CWL council. She kept her membership active in her home parish in Snow Lake, and still helps out the council’s activities from afar. “I went home to visit and was handed four books of tickets of sell, so I did” she recalls.
Though all three Nogier women joined the CWL for different reasons, all three say they have found the league a source of spiritual and human fellowship. Melissa says “connecting with women of different ages who share one common belief” gives her a safe place to express her values, something “that doesn’t happen very often” outside the league.
Ella Nogier similarly speaks of the beauty of having the fellowship of other women, but with the added bonus that it gives her an extra connection to her two adult daughters. Meanwhile Jacqueline, who now serves as Resolutions Chair on the CWL National Executive, says her desire to keep growing and serving the work of the league has given her leadership skills and confidence she did not feel she had before. On a person note, it gave her “an extra layer of sisterhood” with her sister Melissa, and a vehicle to connect with her mother as an adult.
Photo c/o Olaf Photo.