From Parish to Paris: Why the World’s Faithful Are Asking for Climate Action 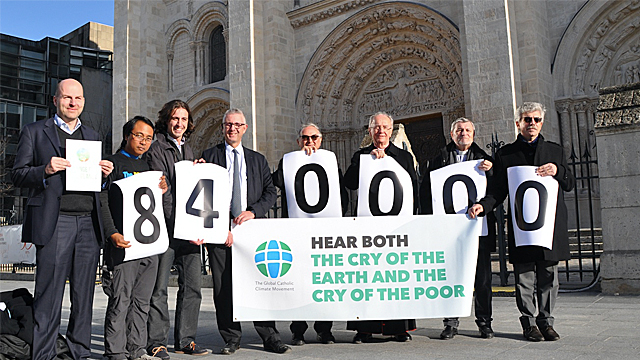 “Lord, make me an instrument of your peace.” These words from the popular prayer attributed to St. Francis come to my mind as international negotiators and the world’s religions gather in Paris seeking to address climate change.
As Pope Francis reminds us in his encyclical Laudato Si’, peace and the protection of creation are united goals. His predecessors, and many more leaders from other faiths, have taught likewise. In preparation for the COP21 climate talks, an inspiring number of Catholics have heard this teaching and mobilized globally. Many are now in Paris – a city that has shown the world the meaning of hope – to bring the voice of faith to these negotiations.
Here and around the globe, in interfaith and secular events including today’s massive Global Climate Marches, Catholic climate activists are holding hands with their brothers and sisters from many faith communities – including other Christian denominations, Jews, Muslims, Buddhists, Hindus, and so many others. From Sao Paulo to Berlin, from London to Manila, together they cry out for the planet, for the poor and the indigenous, and for future generations so that the world may know peace.
Yesterday – as Christians prepared to enter Advent, the time of readying oneself for the birth of Jesus Christ – I joined representatives of other faiths to deliver to authorities of the United Nations and the French government (who preside over the COP21) the signatures of over 1,780,000 people from across the world who have signed petitions that implore our leaders to act decisively, before it is too late.
It was a profound honor to represent the 840,000 Catholics – children, men, and women united across continents, cultures, and languages – who have made themselves instruments of God’s peace by signing the Global Catholic Climate Movement (GCCM) petition.
Formed only ten months ago, the GCCM has become a steadfast, faithful, and growing voice. They have joined those from on-the-ground charitable arms of the Church, and with so many others, to cry out for climate justice – as well as for justice’s sister virtues of prudence, temperance, and fortitude, so that we may act properly and soon.
“Inspired by Pope Francis and the Laudato Si' encyclical,” the GCCM petition states, “we call on you to drastically cut carbon emissions to keep the global temperature rise below the dangerous 1.5°C threshold, and to aid the world’s poorest in coping with climate change impacts.”
We who signed this petition – for indeed I have, too, as have many other cardinals and bishops – know of these impacts. Because fossil fuels have added to the natural blanket of carbon dioxide that surrounds our planet, our atmosphere now holds more and more of the sun’s energy. This reality is worsened, of course, with the devastation of our planet’s forests, such as in the Amazon River and the Congo River basins – as I know intimately through my work with the Pan-Amazon Ecclesial Network. As human activity slashes so much wondrous acreage of Earth’s forests, our planet loses capacity to absorb carbon dioxide.
Today many communities, the most vulnerable especially, feel the results: the sting of drought; the devastation of sudden and massive floods; the shift in species in the waters that families have fished for centuries. The list goes on and it is expected to grow – unless we change our ways. Which, of course, we can.
“Where there is doubt, [let me sow] faith,” the Prayer of St. Francis continues. “Where there is despair, hope; Where there is darkness, light; And where there is sadness, joy.”
This prayer is not a passive one. It asks us to live God’s ways and to sow His presence within human history. It asks for the courage to live with sacrificial love for all things and all life that God created.
In Laudato Si’ Pope Francis teaches that if we, like St. Francis, “feel intimately united with all that exists, then sobriety and care will well up spontaneously. The poverty and austerity of Saint Francis were no mere veneer of asceticism, but something much more radical: a refusal to turn reality into an object simply to be used and controlled.”
Whether that object is a person or our planet, you and I are called to love and care for all that God created – not abuse it. Nor can we stand by while others do so. This is why I happily join the 840,000 of my Catholic sisters and brothers in exhorting the COP21 negotiators to develop the international frameworks needed for a climate of justice – and, yes, for the temperance, prudence, and fortitude that, with God’s grace, protects creation itself and will help bring peace to all the world. 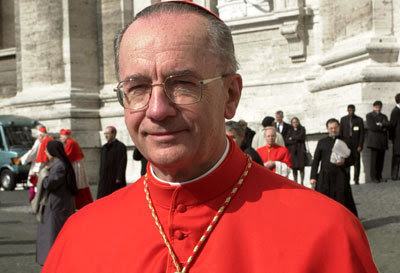 *Brazilian Cardinal Cláudio Hummes, OFM, served as prefect of the Congregation for the Clergy in the Roman Curia (2006–2010), having previously served as Archbishop of Fortaleza from 1996 to 1998 and Archbishop of São Paulo from 1998 to 2006. A member of the Order of Friars Minor and an outspoken proponent of social justice, he was elevated to the cardinalate in the consistory of February 21, 2001. In 2013 he served as one of the 115 cardinals in the conclave that elected Pope Francis. When the new Pope was elected on March 13, 2013, Cardinal Hummes, who was sitting next to him in the Sistine Chapel, whispered to the Pope, "Don't forget the poor!" and the Pope said that immediately he remembered St. Francis of Assisi and "the name Francis came into my heart". When the newly elected Pope Francis appeared on the loggia of St. Peter’s Basilica that same night shortly after his election, Cardinal Hummes was among the cardinals who accompanied the new pope and stood beside him at his immediate left on the balcony. The Cardinal is now living in retirement in Brazil. Cardinal Hummes is currently President of the Pan-Amazonian Network/REPAM. He is in Paris for the Climate Conference and is part of the REPAM delegation. Feel free to republish this article in English in your various publications.