From Ireland to Australia to Toronto to Nashville 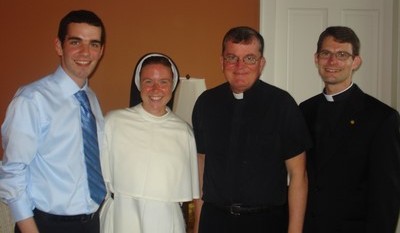 [This blog comes from Brendan Collins, a seminarian for the Diocese of Derry, Ireland, who is interning with Salt + Light Television Network during the months of July and August 2009.] My first visit to American soil was this past Friday, July 24th. I traveled to the Mother House of the Dominican Sisters of St. Cecelia, in Nashville, for the Final Vows and Solemn Profession of eight religious sisters. Over the weekend many asked me how I came to be in Nashville. My story covers thousands of miles from Ireland to Australia and takes in an event which attracted 223,000 registered pilgrims, including 110,000 from 170 nations, making it the largest event ever hosted in Australia. All of this was indeed World Youth Day 2008, held last July in Sydney. It was at WYD that I met one of the Nashville Dominicans, Sister Anna Wray, OP. She was the coordinator of the International Liturgy Group (ILG) of which I was one of two Irish delegates. During this time I got to know more about the Dominican order and the wonderful work the sisters do in education. Through Sister Anna the group got to know many other sisters and we all became even more interested in the joy these Sisters seem to be filled with. Everyone they encountered seemed to be in awe! At World Youth Day I also met Salt + Light Television CEO Fr Thomas Rosica. He told me about Salt + Light Television and throughout my next year of studies in Rome I followed their work. It was also through the Salt + Light documentary Beloved I would get an even greater insight into the work and life of the sisters. There is another part to my story; Ireland is quite a distance from Nashville and a long trip for one weekend! I made the trip from Toronto though, which raised more questions from the Sisters. I explained that I am working for Salt + Light during my summer break from seminary. The smile and joy from each of them reassured me they were all very grateful for the work that is done at Salt + Light. Many asked me to convey my regards to all the staff and to let them know they are praying for the continuation of the work they do. This year the sister’s have 22 young woman entering their religious order. One of them was asked by Sister Anna if there was a moment, or instance, in her life that made her finally decide to enter. "Yes," she replied, "I watched Beloved, the Salt + Light Production, and I knew then this was the life for me. It was the reassurance I needed.” For all the staff at Salt + Light this is a great affirmation that the work they do is very much needed for the world today. Hearing the positive comments from people I spoke to in Nashville made me proud to be part of such a wonderful organization. I initially went to the ceremony to represent WYD’s Liturgy Group but it was an honor to be called a member of Salt + Light Television!