Last week, the Downtown Chapel in Portland, Oregon, made a special announcement:  they’re changing their parish name.  A recent degree by the Archbishop of Portland will change the Church’s patronage from St. Vincent de Paul to the Congregation of Holy Cross’ first saint, St. André Bessette. 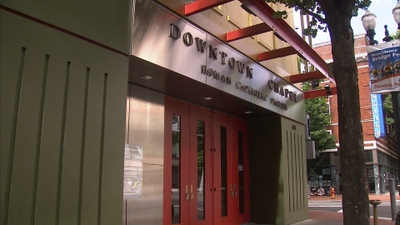 For any of you who have seen the documentary God’s Doorkeeper:  St. André of Montreal, you may recall the foot washing scene.  This was filmed at the Downtown Chapel, an apostolate of the Congregation of Holy Cross for over 20 years. This name change is significant for the Downtown Chapel because it affects their identity.  The idea of changing the name is not new to them.  The pastor, Fr. Steve Newton, CSC, has this to say about the process his parish had gone through:

When I first met with the Archbishop in September, I asked him whether it might even be possible to change our name.  He had people in his office research this.  Our staff had been considering names such as Christ the Healer (after the icon in the worship space) and St. André Bessette.  In the excitement of André’s canonization this past October, that emerged as the more popular of the two.  Of course, he was also a member of our Holy Cross Congregation. We thought that once we found out if it were even possible to make a change, we would have a parish forum to discuss whether we wanted to and, if so, what name we would want. But before we could do that, we received a decree stating that the Archbishop had changed our name to St. André Bessette Church.  There was to be an article in the Catholic Sentinel announcing the change!   I asked the Archdiocese to hold off until we could discuss it as a parish.  They agreed. We discussed it Sunday, January 16, at the forum.  The acceptance of the change was quite high. A lot of good reasons for doing so were mentioned by those present. And although there was no opposition among those present, I want to invite feedback from those who could not be present. We can be proud to be among the first parishes in the world with the name St. André Bessette Church. But we have no intention of rushing to change our name on signs and stationery.  It takes time to do all that needs to be done when any organization makes a name change.  One of the goals of the planning process will be to identify all the things that need to be done before we drop one name and go to the other.  The official name has been changed; the popular name will take some time.

Find out more about the Downtown Chapel and its name change, by going here.