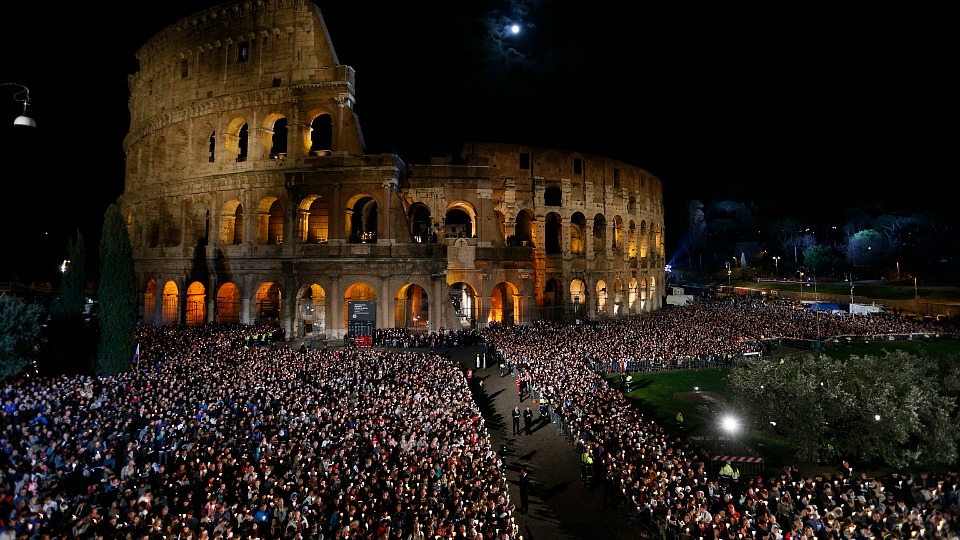 The moon is seen over Rome's Colosseum April 3 as Pope Francis leads the Good Friday Way of the Cross. (CNS photo/Paul Haring)
Anne-Marie Pelletier was asked by Pope Francis to compose the meditations for the Way of the Cross next week. She is a French Biblical scholar and professor of Sacred Scripture and Biblical Hermeneutics in Paris. It is the first time a lay person will write these meditations. Pelletier emphasized that the Pope’s decision confirms his “attention to the feminine world," though she joked she doesn’t know why she was chosen by the Holy Father. The scholar said she had been invited at the Vatican before: once in 2001 as an auditor for the Synod of Bishops; and again to participate in a symposium organized by the Pontifical Council for the Culture. Pelletier also revealed that she’s already met the Pope. Her goal then, she stressed, is to work “for the Church, in communion with the Pope, in a shared passion for the world and for the Gospel." When she received the invitation to write the meditations, she said she was "very surprised and excited, especially because it means to prepare meditations of a decisive moment in the Christian celebration of the Easter mystery. The death of Jesus on the cross,” she continued, “goes to the heart of the faith. Because it faces the ultimate paradox: God suffers violence of men, entering in it to win it with love and forgiveness". Regarding the meditations, the author worked a lot with the Gospels and said to have found inspiration in her own memories, as well as selected writings from the Jewish Etty Hillesum, the German pastor Bonhoeffer and the Orthodox theologian Christos Yannaras. Last year Pope Francis appointed an Italian Archbishop to prepare the meditations for the Way of the Cross. The year before, the task was given to another Bishop from Italy, who was just created cardinal last November. At seventy years old, Pelletier is married and has three children. In 2014 she received the Ratzinger Prize and has addressed the issue of women in the Church in several of her publications. Pelletier will be the fifth woman to prepare the texts for the Way of the Cross which will be presided by Pope Francis at the Coliseum. The first time a woman had prepared the meditation, was in 1993. The author was Mother Anna Maria Canopi, a Benedictine abbess from Italy.

For more on The Way of the Cross from the Vatican, catch Vatican Connections Fridays at 8 pm ET!