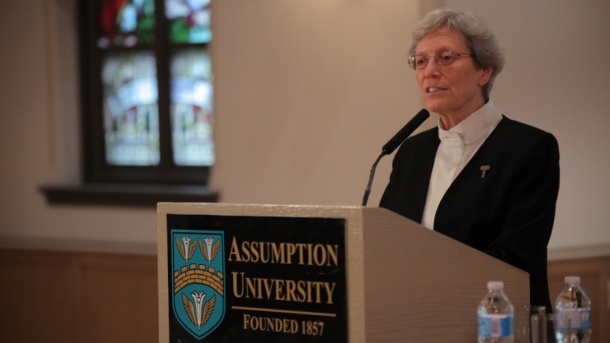 "Consult not your fears, but your hopes and dreams!" (Pope John XXIII, 1962)  On Sunday, November 10th, these words once again rang out at Assumption University in Windsor, Ontario as Sr. Mary Lou Wirtz, FCJM opened here talk on the theme "New Directions and New Relationships for Religious Life".  Sr. Mary Lou is General Superior of the Franciscan Sisters, The Daughters of the Sacred Hearts of Jesus and Mary and participated in the 2012 Synod of Bishops on the New Evangelization in Rome.
According to Sr. Mary Lou, the New Evangelization is directly and intricately connected to the Year of Faith - which concludes at the end of November - and the Second Vatican Council of the 1960's.  She emphasized the need for ongoing and prayerful discernment in the church in order to ensure the progress of the Christian proclamation of Jesus in our times. Religious life was at the center of her address.  She began by painting a picture of religious life before Vatican II, a memory that perhaps is not given enough attention in our discussions about the Council today.  There was immense expectation, she said, and a desire in the religious communities to bring the Church into the modern age.  Religious life was one of the things that changed most drastically during and after the Council.  Concerning the numbers of men and women who left religious life in the years after the Council, Sr. Mary Lou said that, "the vitality of religious life is not about numbers." Turning to the contemporary situation, Sr. Mary Lou drew attention to the many ways in which God is working in the Church, especially through the Petrine Ministry of Pope Francis - himself a religious - who has consciously shown a face of simplicity and humility to the church and the world.  Humility and simplicity, she said, is at the heart of the New Evangelization.  "Religious men and women have always played a prophetic role in the church and will continue to do so."  What is needed in the Church, apart from a theological and pastoral sense, is a contemplative sense, which stems from an honest and organic engagement with the Gospel and a life focused on Jesus Christ.  That is a unique gift that religious men and women can offer today. This lecture was part of Assumption University's Christian Culture Series.  Video recordings of the lectures will air on Salt and Light TV starting in January 2014.  Please check the website for more information in the coming weeks.