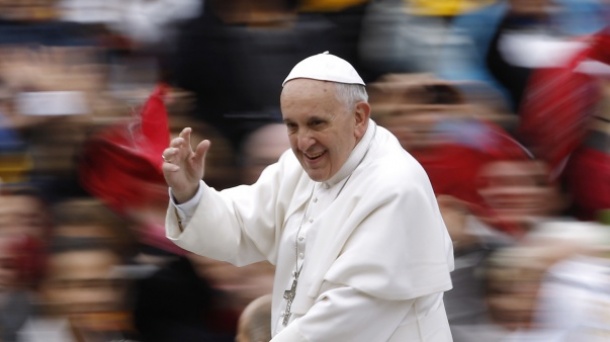 Written by Ruane Remy,
The Catholic Register
Saturday, 23 November 2013
Fr. Tom Rosica, CEO of Salt + Light Television, says Pope Francis calls
Catholics to stand under the transforming gaze of Christ.
TORONTO - Pope Francis was elected the Bishop of Rome eight months ago,
but the honeymoon isn't over yet. The new pope continues to invigorate the
faithful and captivate the secular media, and Fr. Tom Rosica believes he
knows why.
Rosica, CEO of Salt + Light Television and Vatican spokesperson during
March's papal election, addressed about 150 people on Nov. 14 at the
Newman Centre in Toronto on why the Pope says the things he says, does
the things he does and continues to keep the world intrigued.
According to Rosica, the Pope calls the Church and all Christians to
stand under the transforming gaze of Christ. Rosica adds that the world
is stopping to listen to the Pope because he's disturbing our conscience,
mind and heart.
"We let patterns of materialism captivate our lives and distort our
humanity," said Rosica. The Pope disarmingly makes us deeply
uncomfortable in a way that allows us to recognize and confront the
alienation from our own humanity that occurs when we seek happiness in
objects rather than in a relationship with God.
Rosica said the spirituality of Pope Francis is about human faces, the
face of Christ, of St. Francis of Assisi, St. Joseph and Mary, Mother of
the Lord.
When Francis offers a spiritual self-portrait, said Rosica, he describes
himself as standing under the gaze of Christ: I am a sinner whom the Lord
has looked upon.
Even when speaking about abortion and euthanasia, the Pope references the
face of Christ. On Sept. 20 he addressed the International Federation of
Catholic Medical Associations, saying, "Each child who is unborn, but is
unjustly condemned to be aborted, bears the face of Jesus Christ, bears
the face of the Lord, who, even before he was born, and then as soon as
he was born, experienced rejection of the world. Similarly, each old
person, even if infirm or at the end of his or her days, bears the face
of Christ. They cannot be discarded."
When the Pope visited the island of Lampedusa off the Sicilian coast,
where hundreds of refugees have died in search of a better life, he
coined the term "globalized indifference," meaning that we have become
desensitized to the suffering of others.
"The Bishop of Rome is calling us to conversion, from the culture of
comfort that makes us think only of ourselves," said Rosica. The Church
must elevate the issue of poverty to the very top of its political
agenda, establishing poverty alongside abortion as the pre-eminent moral
issues the Catholic community pursues.
Rosica outlined three temptations, according to Pope Francis, to which
the Church must not succumb: to turn the Gospel message into an ideology,
to run the Church like a business and clericalism.
Rosica also spoke about the misunderstood Pope Emeritus Benedict XVI who
made the unprecedented decision in modern times to resign, demonstrating
that he is one of the greatest teachers of the faith that the Church has
ever known.
As for where Pope Francis will lead the Church, Rosica cited a French
journalist who compared the pontiff to a defibrillator. He is giving the
Church new life. Whether speaking on the role of women, life and family
issues, the common good or being a Church for the poor, Rosica says Pope
Francis is challenging people to think outside the box and travel to the
fringes because for the Pope, the Church is missionary or she will die.
---
(CNS Photo/ Paul Haring)