Francis in Latin America: the cultural influence on a developing pontificate 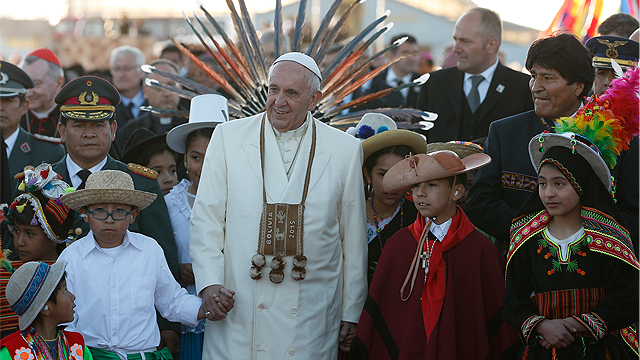 Much of the novelty surrounding the person and pontificate of Pope Francis can be attributed to his Argentine, Latin American background. His personal style, his understanding of church matters and his views on global issues are all shaped by that particular cultural experience. The significance of this cannot be overstated.
So when Francis returns to his home continent, it’s an opportunity to see and hear him at his best. We witness, not only the shepherd who smells a lot like the sheep, but the sheep who know well the voice of the shepherd. The stars align, in a sense, and we are all witnesses of the spectacle.
The result is a breakdown of the cultural and linguistic barriers that sometimes exist when Francis is working in Rome. There, he is still an outsider, as he acknowledged when he was elected: “It seems that my brother Cardinals have gone to the ends of the earth to get [a Bishop of Rome]… But here we are.”
But in places like Ecuador, Bolivia and Paraguay—the three countries on his itinerary this week—Francis is very much at home. Exhibit A: When he addressed a group of religious, priests and seminarians from Ecuador at the Marian Shrine of El Quinche on Wednesday, he looked out over the crowd and said, “I’ve prepared some remarks to share with you, but I don’t feel like reading them.” He proceeded to give a spontaneous, lengthy reflection on the ability to see everything as a total free gift from God, and reminded those present not to forget who they are and where they come from.
It’s not the first time (nor the last, I would wager) that Francis has gone off-the-cuff, but in this case the setting and immediate audience certainly affected the dynamic of the address; a synergy was spontaneously and organically created.
Interestingly, the consequences of this affect not only his immediate audiences but in fact the whole Church. Though not quite in Argentina (you might think he’s there from the number of his countrymen currently in Bolivia!), Francis is at home; he is comfortable. And the result is that we see and hear some of his clearest communications on the Church and its mission.
This was the case when Francis first visited his home continent in the summer of 2013 for World Youth Day in Rio. There he gave a series of addresses that set-up the core themes of his pontificate, in particular the address to the Brazilian Bishops and the address to the leaders of CELAM. That visit became a lens through which we could understand Francis a bit better and, more broadly, the direction in which the Catholic Church may inevitably be heading. The publication of Evangelii Gaudium a few months later confirmed this in spades.
So, a word to the wise: what Francis says on “home” soil is hugely significant, not only for the people in front of him, but for the whole Church. What he says and how he says it may be another key to understanding his vision for the Church and the practical consequences of realizing it. Pay particular attention to what he’s saying about ecology and humanity’s relationship to the created world (especially in light of his recent encyclical), and to the importance of healthy family life. More broadly, a universal call to conversion has emerged from his addresses, that is, a change of mind and heart about what it means to be a relational human being in our world today, what Francis described in this morning’s homily as “the logic of love”.
--
CNS photo/Paul Haring

On Further Reflection In the complex world of the 21st century there are more questions than answers. The challenge for the Church is to find new and effective ways of bringing the Gospel message into the conversation.  For her part, the Church can act as a much needed voice for dialogue, reason and charity. On Further Reflection invites readers to go beyond the headlines to see the deeper realities affecting the church and society.  Sebastian Gomes is a producer and correspondent for Salt+Light TV.