Francis at Six: What has the Holy Spirit done? 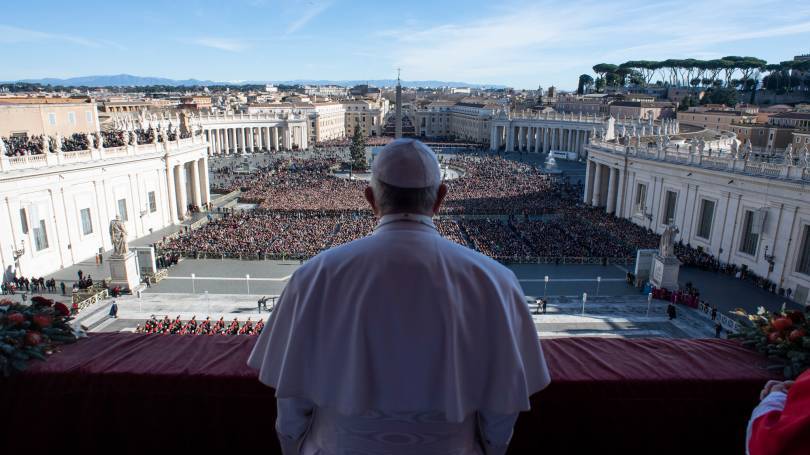 Pope Francis leads his Christmas message and blessing "urbi et orbi" (to the city and the world) delivered from the central balcony of St. Peter's Basilica at the Vatican on Dec. 25, 2018. (CNS photo/Vatican Media)
“The Holy Spirit chooses a pope for a specific moment in history,” Catholics often say. While it rolls off the tongue like a truism, it is a considerably loaded statement.
Broadly speaking, do Catholics grasp the essence of it? Or is it, rather, a convenient turn-of-phrase that, though true to the faith, serves to avoid complex and potentially controversial conversations about the pope-du-jour?
What does it really mean that the Holy Spirit chooses a pope and works through him? And why do the particulars of an historical moment matter at all to the Petrine Ministry?

For the past few weeks, Catholics have been reflecting on the sixth anniversary of Pope Francis (March 13th). Six years is a considerable amount of time, and Francis has accomplished a great deal. More than anything, he has put the Catholic Church on a definitive trajectory:

- The Church is dialogical: Catholics do not approach others with a sense of superiority. Rather, our first instinct is to listen humbly and learn; to try to embrace differences and to articulate Christian principles in service of the mutual journey towards deeper relationship.
- The Church goes to the peripheries: Catholics cannot truly discern the will of God apart from those on the peripheries. Only through the experience and expertise of the most marginalized and powerless people can the Christian community remain faithful to Jesus and discern its role in building the Kingdom.
- The Church’s modus operandi today is integral ecology: Concern for creation is no longer one ministry or charism among others. The entire life and mission of the Church presupposes the integral ecology outlined in the pope’s encyclical, Laudato Si’. Nothing “Catholic” can be irrelevant or excluded from that framework.

Because this messaging has been so clear and consistent from the beginning, debate and even division have ignited within the Catholic community, especially in North America and Europe. There are Catholics today who are deeply unsettled by this trajectory; they are the same Catholics who were deeply unsettled six years ago when Francis was first elected.
At his inaugural Mass, Francis displayed docility to the Holy Spirit by holding up St. Joseph as the model “protector” of the Church:

“God does not want a house built by men, but faithfulness to his word, to his plan. It is God himself who builds the house, but from living stones sealed by his Spirit. Joseph is a ‘protector’ because he is able to hear God’s voice and be guided by his will; and for this reason he is all the more sensitive to the persons entrusted to his safekeeping. He can look at things realistically, he is in touch with his surroundings, he can make truly wise decisions.”

The newly elected pope also hit on the themes that have come to define his vision for the Church: “Being a protector… means building sincere friendships in which we protect one another in trust, respect, and goodness” (dialogue). “To protect each person, especially the poorest” (peripheries), and “to protect the whole of creation” (integral ecology), “this is a service that the Bishop of Rome is called to carry out.”
For six years, this papacy has been utterly consistent. So what does that tell us about the work of the Holy Spirit? Where does the Spirit fit in?

What the world needs now

Back in 2014, during production of our documentary The Francis Effect, I had the opportunity to interview Anderson Cooper of CNN. We reminisced about the infectious joy in St. Peter’s Square the night Francis was elected — we were both in Rome at the time covering the conclave — and about the new and positive energy Francis was infusing into global Catholicism. When I pointed out that Francis hadn’t changed any core doctrines or teachings, Anderson responded, “It’s not a change of doctrine, but it’s a change of emphasis. And it’s a huge change.”
A change of emphasis. This notion always struck me as perceptive about Francis, and it reveals something of the fluid presence of the Holy Spirit who “blows where He wills” (Jn 3:8). The prerogatives of any pope are indeed grounded in the basic principles of the Christian faith, but they are forged in dialogue with the fluctuating realities of an age. What emphases does the world demand of the Church and a pope at a given moment? A sincere discernment of this question in light of the tradition can reveal the voice of the Holy Spirit.
Francis calls for a new dialogue between peoples because the world is becoming hopelessly intransigent with people becoming increasingly alienated from one other.
Francis roots the Church’s mission at the peripheries because the world has silenced the voices of the powerless that can shape a new dialogue.
Francis provides an expansive framework for integral ecology because the world and humanity will not physically survive without it.
In short, the pope is who the world needs him to be. He is not here to do what we think he should do or to reinforce our petty ideological positions. He is here to ensure that the sole mission of the Church as a sacrament for the salvation of all is enacted, as Gaudium et Spes 45 makes clear.
“The Holy Spirit chooses a pope for a specific moment in history.” Yes, indeed, any truly honest assessment of the past six years of Francis will recognize the blessing he has been for a world in desperate need of a new path forward.