“The only thing you need– a star and a pure heart” -- A Biblical Reflection for the Solemnity of the Epiphany, Year C

The term epiphany means "to show," "to make known" or "to reveal." The Feast of the Epiphany had its origin in the Eastern Church. In Jerusalem, close to Bethlehem, the feast had a special reference to the Nativity. Today in Eastern Orthodox churches, the emphasis for this feast is on the shining forth and revelation of Jesus Christ as the Messiah and second person of the Holy Trinity at the time of his baptism. Usually called the Feast of the Theophany, it is one of the great feasts of the liturgical year. "Theophany" comes from the Greek for "God shining forth." 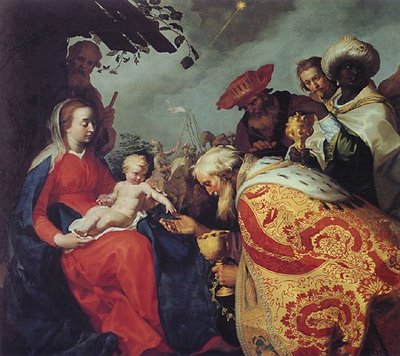 From the beginning, My Church has been what it is today, and will be until the end of time, a scandal to the strong, a disappointment to the weak, the ordeal and the consolation of those interior souls who seek in it nothing but Myself. Yes...whoever looks for Me there will find Me there; but he will have to look, and I am better hidden than people think, or than certain of My priests would have you believe. I am still more difficult to discover than I was in the little stable at Bethlehem for those who will not approach Me humbly, in the footsteps of the shepherds and the Magi. It is true that palaces have been built in My honor, with galleries and peristyles without number, magnificently illuminated day and night, populated with guards and sentries. But if you want to find Me there, the clever thing is to do as they did on the old road in Judea, buried under the snow, and ask for the only thing you need– a star and a pure heart.