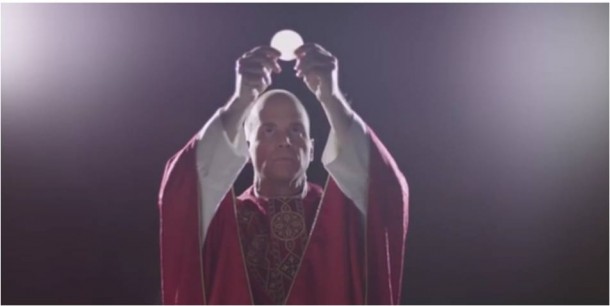 CHICAGO August 6, 2014 – According to Father Robert Barron, Rector of Mundelein Seminary and creator of the acclaimed CATHOLICISM film series, the Church is facing a crisis. “We’re currently experiencing the darkest period in the history of American Catholicism,” he observed. “People are drifting away from religion at massive rates.  They’re disenchanted with God and disappointed with the Church. The fastest growing group is the so-called ‘nones,’ those who express no religious affiliation.” It was in response to these trends that Father Barron created CATHOLICISM, an epic ten-part documentary on the Catholic faith, which aired nationally on PBS and was seen by millions around the world. “The CATHOLICISM series remains one of the most exciting and fruitful projects of my life,” said Father Barron. “Our team traveled the globe to capture the beauty, truth, and texture of Catholicism, and the result was a fresh presentation of the faith for Catholics and non-Catholics alike.” What the CATHOLICISM did for the Catholic faith in general, his newest project, “Heroic Priesthood” (http://HeroicPriesthood.com), aims to do for the priesthood in particular. “As a long-time theology professor and now Rector of Mundelein Seminary, I’ve seen firsthand the challenges facing today’s priests. The priesthood is looked upon with suspicion and confusion by most of the culture—especially by young people. We need to change that.” The twelve-minute film, produced by Father Barron’s Word on Fire Catholic Ministries in partnership with Spirit Juice Studios, a premier Catholic design studio based in Chicago, aims to alter those misperceptions. “My goal with this film is to reach as many people as possible—certainly priests and seminarians, but especially young Catholic men. I want them to see that holiness is heroic and that Jesus Christ’s invitation to the priesthood is an invitation to an extraordinary life.” Shot on location at Mundelein Seminary, the film centers on three seminarians and an annual basketball tournament, which brings together future priests from across the country. Through world-class cinematography and a stirring musical core, the film illuminates the high idealism and adventure of the Catholic priesthood like never before. Viewers can watch the entire film free online, along with extra video resources from Father Barron, at http://HeroicPriesthood.com. Word on Fire is also making the film available on DVD for bulk ordering. The ministry hopes to equip bishops, dioceses, parishes, and priests with thousands of copies in order to reach every Catholic young man in the country. “I want young men to understand that the Catholic priesthood seeks the integration of mind, body, and soul and that the priesthood is a flourishing way of life. If young men glimpse the radical, resplendent, and ultimately heroic call of the priesthood, this film will have been a success.”

Father Robert Barron is the founder of Word on Fire Catholic Ministries, a global, non-profit media group. He is also Rector of Mundelein Seminary/University of Saint Mary of the Lake near Chicago.  Father Barron is perhaps best known for creating and hosting the CATHOLICISM film series, an epic ten-part documentary on the life and teachings of the Catholic Church. The series was broadcast nationally on PBS and has been seen by millions worldwide. Ordained a priest of the Archdiocese of Chicago in 1986, Fr. Barron has also published numerous books, essays, and DVD programs. He is a frequent commentator on faith and culture for NBC, FOX News, The Chicago Tribune, Our Sunday Visitor, The Catholic Herald in London, The Washington Post, CNN and The Catholic New World. He lectures extensively in the United States and abroad, including the Pontifical North American College at the Vatican and the Pontifical University of St. Thomas Aquinas in Rome. Fr. Barron received a Master's Degree in Philosophy from the Catholic University of America and a doctorate in Sacred Theology from the Institut Catholique de Paris. Cardinal Francis George, archbishop of Chicago, has called Father Barron “one of the Church's best messengers.” Word on Fire Catholic Ministries (http://www.WordOnFire.org), Father Barron’s media evangelization ministry based in Skokie, Illinois, reaches millions of people through its films, study programs, and online work. With over 400,000 social media subscribers and an extensive collection of over 3,000 free digital resources, Word on Fire is on the vanguard of Catholic new media.