Fr. Michael McGivney - a model for the New Evangelization 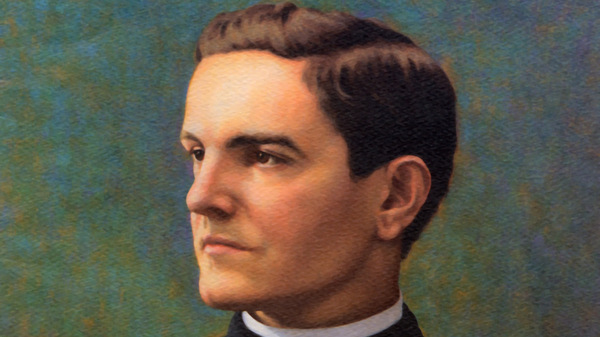 Venerable Father Michael J. McGivney, was the founder of the Knights of Columbus. This young priest from New Haven, Connecticut remains a compelling model for all as we're called upon to participate in the New Evangelization. Inspired by the Beatitudes, he was a man ahead of his time. He  worked to restore the dignity of the marginalized, especially widows and orphans. He inspired the men of his parish to see themselves as capable of changing the world for the better. He made parish life  - not just an obligatory pit-stop at the end of the week - but the centre of community life. Under his leadership his flock grew in faith and eventually made an invaluable contribution not only to their neighborhood, but far beyond it. There's so much that we can learn from this humble, imaginative priest. When I was working on the The Church Alive series, I found many parallels between today's vibrant parishes and the approach that Fr. McGivney adopted in his day. In fact, many of the great ideas that we see with regard to the work of the laity and the importance and relevance of Catholic social teaching are exemplified in Fr. McGivney's parish ministry (long before Vatican II was on the horizon!) What's particularly noteworthy is that he was born into difficult, turbulent times and yet through God's grace shone with heroic virtue. And the same can be said of the Knights of Columbus, the lay organization which he founded; these men in as much as they remain faithful to the original charism of Fr. Michael McGivney are a tremendous force for good in the world. To learn more about Fr. Michael McGivney  check out the Fr. Michael McGivney documentary trailer. Interested in finding out more about the Knights? Watch the 132nd Supreme Convention which took place recently in Orlando, Florida. We'll rebroadcast our live coverage on August 23, 2014. Here's the line-up. And if you're still trying to wrap your head around what exactly the New Evangelization is, then check out the Church Alive Series. We've got a comprehensive study guide to accompany the series for those who'd like to tackle these big issues  in your prayer group or classroom. After all, the Synod on the Family is around the corner, and you'll want to be up to speed as the Church examines some of the most pressing questions of our times. CNS photo - Father Michael J. McGivney, founder of the Knights of Columbus, is depicted in an image from the Knights. Father McGivney's cause for sainthood took a step forward with a decree in 2005 approved by Pope Benedict XVI, when Father McGivney was given the title "venerable." Father McGivney founded the fraternal order for Catholic men in 1882 in New Haven, Conn. It has since become the largest lay Catholic organization in the world with more than 1.7 millions members.