What does it mean to communicate? Unity, Truth, Goodness and Beauty 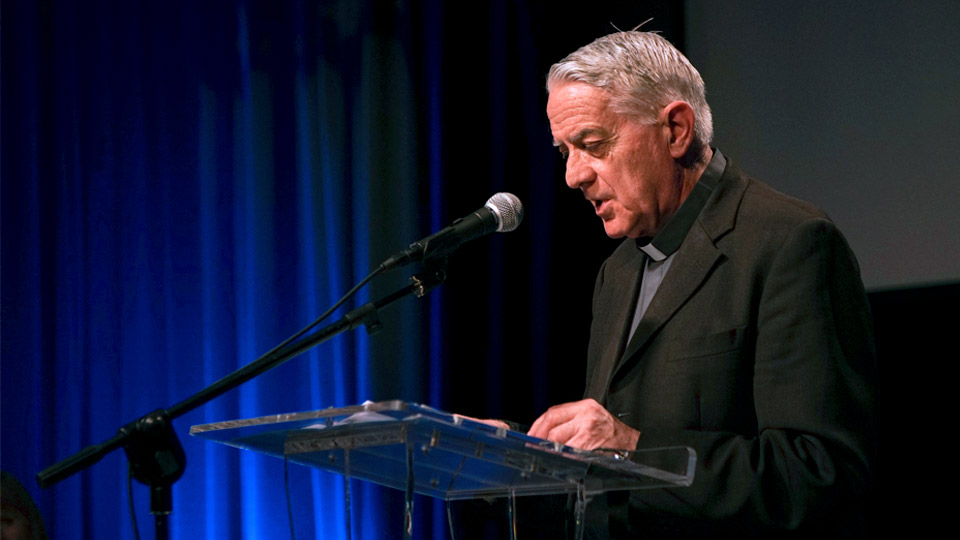 Photo: Salt + Light
How to communicate? Why communicate? What does it mean to communicate? Unity, Truth, Goodness and Beauty Fr. Federico Lombardi, SJ Former Director of the Holy See Press Office, Vatican Television Center and Vatican Radio President of the Joseph Ratzinger - Pope Benedict XVI Foundation Inauguration Ceremony for the new Salt and Light Broadcast Centre Toronto – May 25, 2017 Your Eminences, Cardinals Collins, Lacroix and Wuerl, Deputy Supreme Knight of the Knights of Columbus Patrick Kelly, Fellow Journalists, Distinguished Guests, Dear Staff, Board Members and Friends of Salt and Light Catholic Media Foundation, I am very moved and grateful to have been invited to participate in this event that marks a new and most important step in the beautiful history of Salt + Light Television. Yours is a story that I have been privileged to accompany with a deep friendship and closeness from its very beginnings, in the context of the unforgettable World Youth Day 2002 of Toronto, and then in its marvelous growth with splendid fruits for the Church community. I can attest to these fruits that have not only been visible in Canada and North America but now for the universal Church, present on many continents. The service rendered by Salt and Light Television on the occasion of recent Synods of Bishops for example – in a great spirit of collaboration – has made a significant contribution that has been shared by countless other media, agencies and websites, thus making known and easily understood the works and messages of the Synods of Bishops in countless places of the world. What useful words may I offer you this evening, as an old worker in the vineyard of the Lord in the field of communications at the service of the Popes, and as a friend who has joyfully participated in the opening of a new stage of your service that is filled with the enthusiasm of the Gospel: the salt and light of the world? I feel that I can naturally share with you several lessons that I have learned from the three Popes that I have served, and then, inspired by these lessons, to propose to you several simple messages for the future of your mission and ministry.

How to communicate: the lessons of three Popes John Paul II

Who has had the ability to express himself with order, clarity, synthesis, depth and refinement, comparable to his own? I will tell you a small episode that I cannot forget. On the eve of his last trip to Germany, German television had asked Benedict to send a short message for the "Wort zum Sonntag - Word for Sunday" program, aired on Saturday night for the duration of three minutes. The Pope accepted to record it and I went to Castel Gandolfo with the crew of the Television Center (it was September). We prepared ourselves and when the Pope arrived, without having anything written in his hand, I told him that if there had been any mistake or inconvenience, he could quietly stop or repeat, because it was easy for us to correct or edit it. He thanked me and told me only to tell him when he should start. I motioned with my hand and he spoke - of course in perfect German - in an absolutely clear and linear manner, without the slightest uncertainty, without interruption, looking at the camera, and at some point, he ended. I looked at the watch: 2 minutes and 55 seconds! We were astonished. The Pope asked if he had to do anything more. We told him no, because he was perfect. He greeted us with his usual kindness and departed. This was Benedict: he knew what he wished to say and said it well, in an orderly and clear manner. In very few minutes he spoke very deep thoughts and concepts. During the Great World Youth Days in Cologne, Sydney and Madrid - young people did not often interrupt him with cries and applause in response to his words, for they realized that it was best to follow the thread of his addresses so as not to lose their meaning and depth. But the deepest experience I had with Benedict was that of the commitment to grow in truth and transparency. And I understand that this has a price, which could be very painful. We all know that one of the great "crosses" of Benedict's pontificate - I think the greatest - was the story of sexual abuse in the Church. He bore it with great humility, patience and perseverance, personally making all the necessary steps for a long journey, ranging from the recognition of the severity of the faults in the Church, the personal hearing of the pain of the victims, the establishment of the norms and procedures to do justice, to punish the guilty ones, to purification and internal conversion, to provide the criteria for the good selection and training of seminarians, to the spread of a true culture of crime prevention and the protection of minors. It was necessary to recognize the truth even when it is extremely painful, to go deep into the truth before God and men. To not be worried about the "image" first, or concerned about "saving face" (bella figura). Of course, we must wish that our image be good, but only if it corresponds to a good reality. If not, it is a deception. And we've seen what were the tragic consequences of a culture of "cover up," founded precisely on the primacy of outward appearances. Some have tried to accuse Benedict of being compromised with the cover-up of crimes. This is absolutely and incredibly false. On the contrary, he has a "historical" record before the Church and the world in the area of combating sexual abuse. Benedict, who as a thinker and theologian, has always insisted on the primacy of truth and the search for truth, was also in his life and in his behavior as Pope a great witness to the transparency of the truth, with humility and personal suffering.

And finally we come to Francis. Francis is closer in time and is very often before our eyes. It's hard to say what we have not already seen and heard! But it's also worth mentioning something, which I found very instructive for me on how to communicate. First of all, proximity: eliminating all forms of distance and barrier, and becoming closer to the people – leaving the apartment in the Apostolic Palace and living with the others in Santa Marta; leaving the bullet-proof pope mobile and always using an open and ordinary car… choices that speak for themselves and are in continuity with affectionate hugs with the sick, the little ones, all kinds of poor people. Then there is his spontaneous attitude of listening and dialogue. Even for conversations in general, Francis generally wants journalists to ask all the questions they wish; he does not ask to see the questions in advance in order to prepare a response. He wants his answers to be spontaneous even at the cost of not being exhaustive or complete, for in authentic dialogue, we arrive at the truth together, step by step, listening to each other. Not every answer can be the last word, but in dialogue we can draw closer to a deeper and greater truth together. From this closeness and listening also flows concrete and understandable language, drawn from the experiences of people's lives. Francis also recommends it to priests for their homilies in Mass. He says that their language will be understandable to the people if they live their lives in the midst of the people, listening to their questions, their culture and their wisdom. Francis obviously seeks out the encounter with the other. He talks to us constantly about the "culture of encounter" and makes us realize that it is not enough to communicate concepts; we need to talk about ourselves, to enter into the game so that the other understands that we offer him or her a real piece of our life, our whole self. The other also feels he or she is invited to confidently share what is deepest and most precious so that the future can be built together. However in Francis, words go together with gestures. The body expresses the heart and mind. Words and actions complement each other and explain each other. This was already true of Jesus, who spoke about God with his teaching and with his "signs": healing, forgiveness, sharing and multiplication of the loaves and the fish. Francis' gestures, especially those of mercy for the poor and the suffering are so effective and revealing and transcend the limitation of his knowledge of languages, which is lesser than his predecessors, but compensated by the effectiveness of physical expressions and gestures which open the heart and attract even peoples of cultures far from his, such as Asian or African peoples. Finally, Francis invites us to clearly give primacy to what is positive, to love and to mercy. The message of God's mercy is not new. All the Popes have spoken very often of this; And we, too, have always tried to speak about it. But it is true that Francis’ insistence on God's mercy, on forgiveness, on his acceptance of everyone, on the gestures and concrete works of mercy and solidarity ... and the example he has given us by doing these works, has attracted and set in motion a very wide and spontaneous wave of gratitude, almost as if all of this has responded to a deep expectation. Many of us had the impression that a widespread prevention attitude against the Church, which saw her as the "Church of no," of negative precepts, closed in on herself and ready to condemn – an attitude that we often experienced with pain – be loosened following the repeated proposal of Pope Francis’ message of love, forgiveness and consolation, presented in plain and concrete words, and translated into spontaneous gestures of obvious significance.