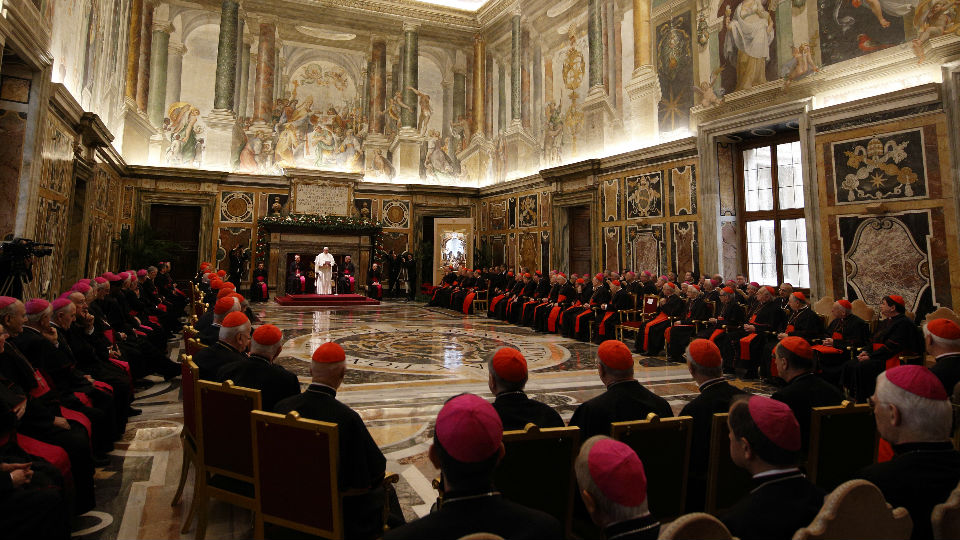 (CNS photo above: Pope Francis updates the Roman Curia on his reform agenda during their Christmas audience in the Apostolic Palace at the Vatican Dec. 22, 2016)
Catch an all new Perspectives on Church Reform under Francis Friday, March 17th at 7pmET & 11pmET
No matter where you're from or how you interpret the first four years of the Holy Father's papacy, odds are you'll use the word "reformer" to describe him. It is widely known from the 2013 pre-conclave meetings that the successor of Pope Benedict XVI—whoever was elected—would carry into office a reforming mandate. So, around Francis' anniversary of election, how do we gauge that reform? Perhaps the easiest approach is to look at the reform of the Vatican bureaucracy. During his annual address to the Curia on December 22, 2016, Pope Francis outlined the "steps already taken" in the restructuring of the Vatican offices and procedures, a task he's undertaken with the help of his Council of Cardinals known as the C9. Progress, it seems, is being made on that front. Another way of gauging the reform is to look at the paradigm shift in tone Francis has introduced, especially related to the Church's pastoral mentality and outreach. It was only six months after his election that he used the term "a field hospital after battle" to describe the work of the Church in our world today: healing people and showing mercy, instead of "locking itself up in small things, in small-minded rules." A few years later he explained the logic of pastoral mercy: "I understand those who prefer a more rigorous pastoral care which leaves no room for confusion. But I sincerely believe that Jesus wants a Church attentive to the goodness which the Holy Spirit sows in the midst of human weakness, a Mother who, while clearly expressing her objective teaching, always does what good she can, even if in the process, her shoes get soiled by the mud of the street." This direct call for a new way of thinking and being, especially in the ordained ministry, has struck a nerve in the Catholic world. Institutionally speaking, it's a reform embodied in Francis' selection of bishops and cardinals. A third way of gauging the Pope's reform is through a wide-angle lens, situating his efforts in a historical context. This modern context must include a earlier paradigm shift, namely, the Second Vatican Council from 1962-1965. As Cardinal Donald Wuerl, Archbishop of Washington, DC recently and astutely noted, "Francis' great contribution to date has been the reconnecting of the church with the energy of the Second Vatican Council." That Council officially promulgated a self-understanding of the Church as perennially in need of reform and renewal, and asserted the Church's very identity is that of a "pilgrim" on a journey. As religion journalist David Gibson told me in an interview back in 2014, "Vatican II did what Pope Francis is doing, before there was a Pope Francis." It is this third way of gauging Francis' reform that I believe holds the key to understanding his day-to-day ministry and, more importantly, the long-term implications of his papacy for the Church. Enter Christopher Bellitto, a church historian from Kean University in New Jersey.
(S+L photo below: Christopher Bellitto speaking with Sebastian on set) 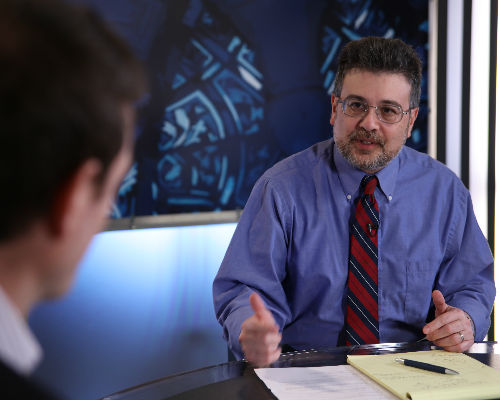 Chris was at Salt + Light last week to discuss his latest book, "Ageless Wisdom: Lifetime Lessons from the Bible," on our book show Subject Matters, which will air later this spring. But we invited him on Perspectives Weekly to discuss another topic, one that is precisely his account: the history of church reform. Offering a unique and deeply informed perspective, Chris explains how after four years we've witnessed enough from Pope Francis to gauge the direction and depth of his reforming agenda, why its challenging but at the same time true to the Holy Spirit.
Perspectives on Church Reform under Francis Friday, March 17th at 7pmET & 11pmET