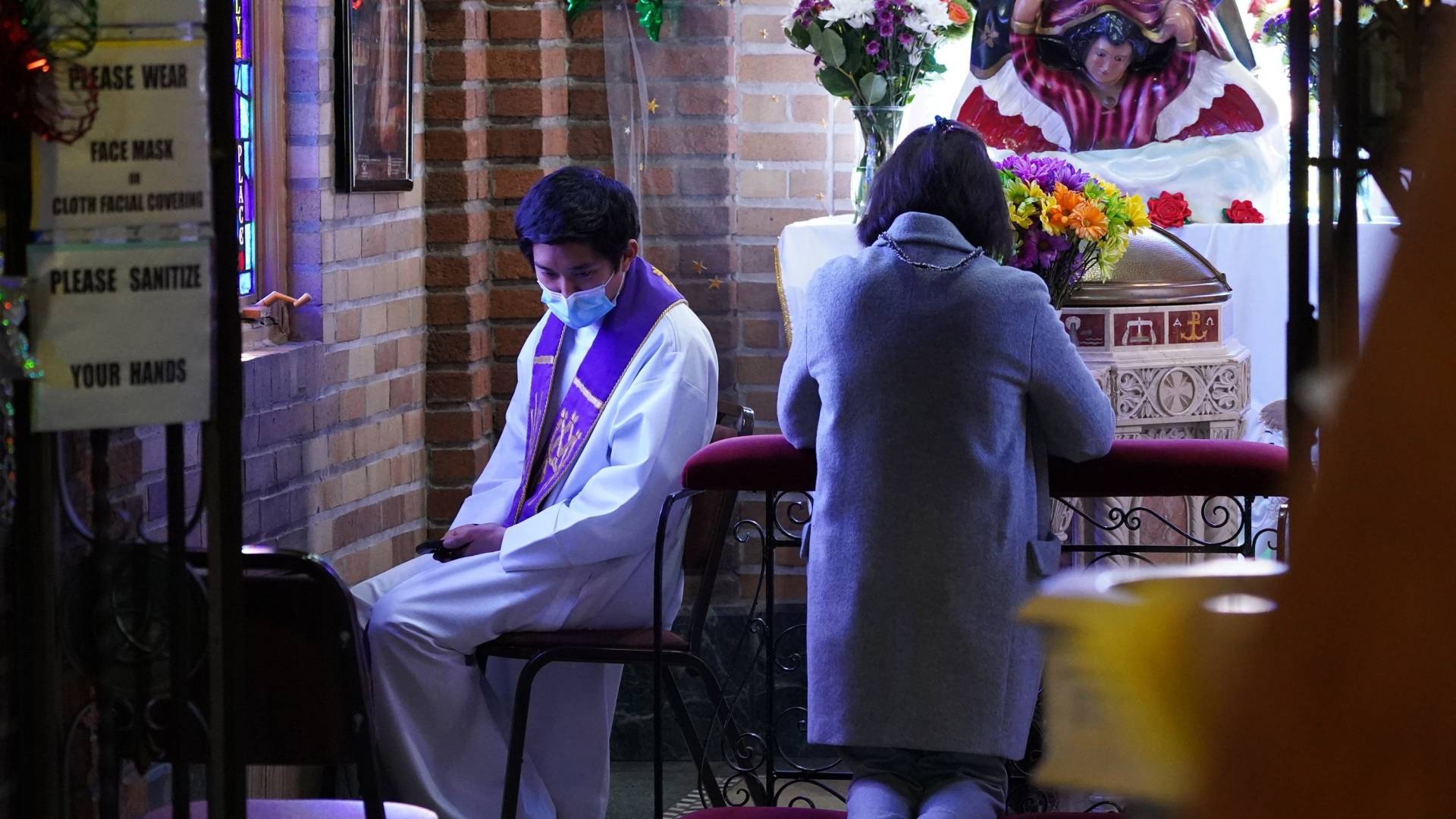 Father Jiha Lim listens to a penitent's confession March 7, 2021, at St. Aloysius Church in Great Neck, N.Y. (CNS photo/Gregory A. Shemitz)
VATICAN CITY (CNS) -- Every year, for more than three decades, the Vatican tribunal dealing with matters of conscience has offered a course to help priests in their "ministry of mercy" as confessors. The huge number of participants, from 500 to 800 ordained and soon-to-be ordained men, who attend the course sponsored by the Apostolic Penitentiary each year attests to the importance and need for adequate formation concerning the sacrament of reconciliation, particularly when confession, as well as "the sense of sin," is in crisis, Pope Francis told participants in 2019. It is a crisis on both sides of the confessional screen. Priests need better formation so that those seeking God's forgiveness truly experience "a real encounter with salvation in which the Lord's embrace can be perceived in all its strength, capable of changing, converting, healing and forgiving," the pope had said. And the laity need to understand better the importance and joy of confession, according to the Apostolic Penitentiary, which decided to respond by offering a special seminar specifically for laypeople. The seminar was held in Rome and online Oct. 13-14. Of the more than half-dozen talks covering the usual biblical, theological and spiritual aspects of the sacrament, the most practical presentation was given by Msgr. Krzysztof Nykiel, regent of the Apostolic Penitentiary. He gave a Top 10 rundown of the most common "good" reasons people give for not going to confession, followed by a faith-based response to each objection. Highlights from the monsignor's list of "I don't go to confession because ..." are summarized here: 1. "... I speak directly to God." Speaking with God is "excellent," he said, and it should be done throughout the day with prayer to know God's will. While "it is not impossible to obtain forgiveness" from God this way, "we would never be sure." Only God can forgive sins, he said. So, before the birth of Christ and a life lived without him, humanity could only "hope" to have their sins forgiven. "With Christ, this mercy has descended onto earth and is accessible" to everyone, and only through confession with a priest can one be certain of receiving that forgiveness. 2. "... I don't like talking about my personal life" with another person. A priest is not just any other person but is one upon whom God has conferred his power to forgive on earth, Msgr. Nykiel said. Verbalizing and owning up to one's sins can be difficult or frightening, he said, but "we feel truly loved when everything about us is loved, not just the good or nice things we display" or when the lies and partial truths are believed. When people present their true selves completely to God, they let themselves be loved fully and completely by God. 3. "... The priest may be a worse sinner than me." It is true that priests are not God, and it is "certainly easier and more uplifting to confess to a holy priest, like St. John Vianney and St. Padre Pio," he said. But "the moral condition of the priest at the moment of absolution is wholly irrelevant to the validity of absolution," because the one absolving the sin is God through the priest, he said. A parallel argument, he added, would be to refuse medical care from a doctor whose own health status is unknown. 4. "... I don't know what to say." This excuse is "the most prevalent," but also the easiest to overcome, Msgr. Nykiel said. Just tell the priest, "I want to confess, but I don't know what to say. Can you help me?" Learning how to do "a good examination of conscience is helpful," he said, but what really counts is a sincere desire "to think about the truth of one's life before God." 5. "... I'll be embarrassed." Feeling ashamed for one's sins "is already the first healthy sign" of a conscience that has not grown numb or blind to evil, he said. It also should be seen as part of contrition and a form of penance that can strengthen the desire for conversion. 6. "... I always say the same things." While it may be good there are no new sins to add to the list, confession is exactly what is needed, he said, to humbly plead with God for his mercy to fight and win the daily battle against one's vices. 7. "... I'm not committing serious sins." One may not be guilty of committing theft or murder, but there are still eight other commandments to keep, Msgr. Nykiel said. Believing only serious crimes count as sin can also be a kind of "self-justification" and DIY redemption. The unworthiness one feels before God "is always directly proportional to one's closeness to him," which is why the greatest saints always felt like the greatest sinners. "If we don't feel like we are sinners, then we still are not saints." 8. "... I didn't like it the last time I went." Confessors might be distracted, unprepared, too "rigorous because he wanted to send me straight to hell" or too lax because "he wanted to almost canonize me despite my serious sins," the monsignor said. People can always seek out a different confessor, he said. But people also may be expecting more than the sacrament is meant for: to wipe away sin and experience God's healing through forgiveness, he said. It is not meant to fix one's problems or make feelings of guilt disappear. Msgr. Nykiel concluded that every objection comes from the same root: "a resistance to love." "The sacrament of reconciliation is too important and too essential to give up for any reason," he said. "Divine mercy is always waiting for us. Let us not run away like capricious children, making up excuses not even we believe."