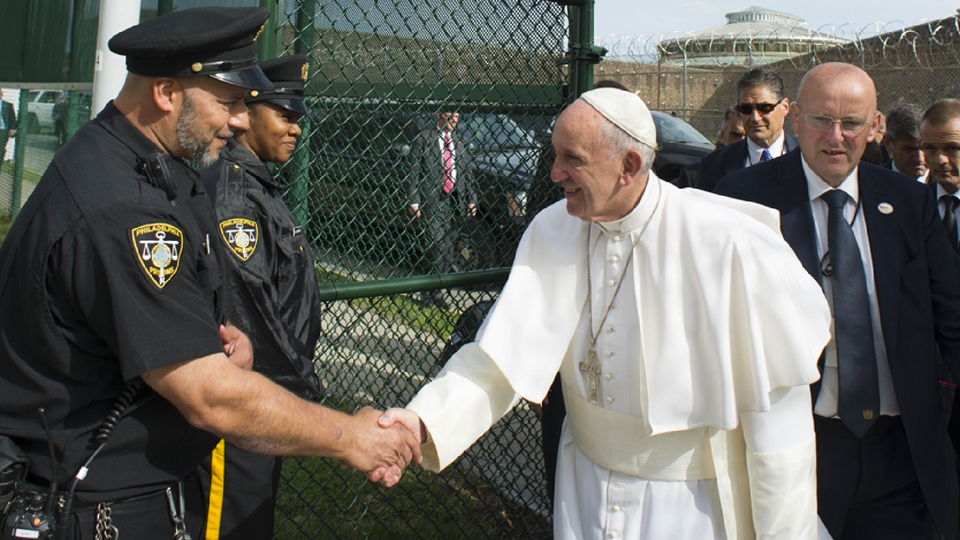 CNS/L'Osservatore Romano
On November 6, 2016 Pope Francis held a Jubilee for prisoners at the Vatican. This unique event took place at the end of the Year of Mercy for one reason: The Holy Father has a special place in his heart for those who are incarcerated. During most of his apostolic voyages, he takes the time to visit prisoners and speak to them. Before the opening of Jubilee of Prisoners, Archbishop Rino Fisichella, president of the Pontifical Council for Promoting New Evangelization, held a press conference. He restated the Pope’s concern for prisoners, that are living on the margins of society. After having visited concentration camps in Poland during the summer of July (27-31 ) 2016, the Pope reminded young people, gathered for World Youth Day, that there still exists in certain prisons today the kind of cruelty which was seen in those camps. “Many prisoners are tortured… there are men and women in overcrowded prisons. They live - forgive me - like animals”. The Holy Father believes profoundly in the dignity of each human person, and that the love of God “restores dignity” and one’s identity. “The man standing before you is a man who has experienced forgiveness” said the Pope, presenting himself to prisoners during a trip to Bolivia in 2015. “A man who was, and is, saved from his many sins… I don’t have much more to give you or to offer you” he added, only Jesus Christ, the mercy of the Father. This is what he has done, very simply, every year on Holy Thursday not only since his election but also since he was Bishop in Buenos Aires. He washed the feet of those who are excluded from society, namely prisoners. The first year of his pontificate he went to Casa del Marmo, a juvenile detention center. The next year, he celebrated Mass with close to 300 inmates in another facility in Rome called Rebibbia. Even within these prisons, healing and reconciliation are possible. In a letter concerning indulgences granted during the Jubilee Year of Mercy, the Pope had a special message regarding prisoners whose “freedom is limited”. These people “may obtain the Indulgence in the chapels of prisons” and “may each time they cross the threshold of their cell signify for them their passage through the Holy Door”. God’s mercy, insisted Pope Francis in his letter, is “able to transform hearts, and is also able to transform bars into an experience of freedom”. The Pope has called for prison conditions based on “helping others” and to not make the distinction between people on whether they are “good” or “bad”. Rather, he tells us again, that each life is sacred, each person is endowed with an inalienable dignity.