Fidel Castro's History with the Popes 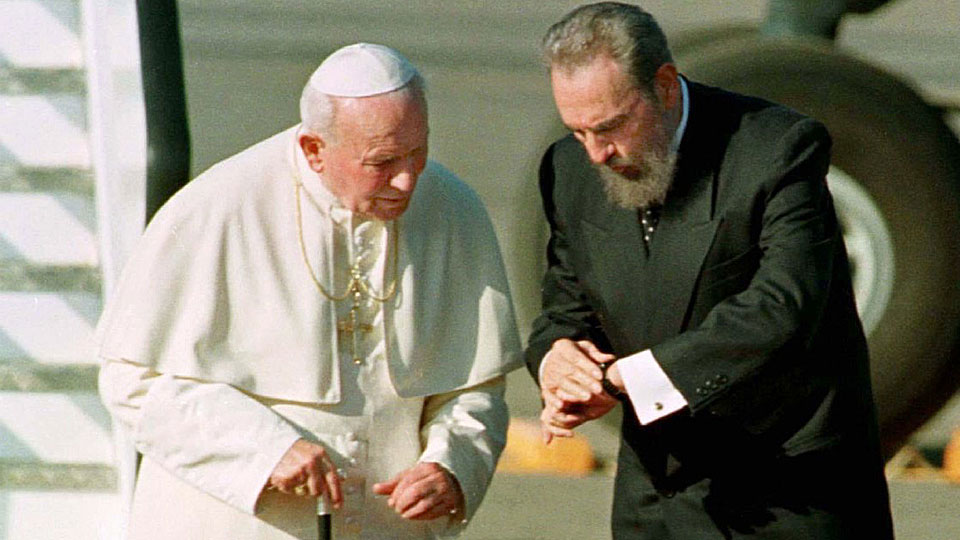 Pope John Paul II and Cuban President Fidel Castro check the time as the pope arrives in Havana Jan. 21, 1998. Castro, who seized power in a 1959 revolution and governed Cuba until 2006, died Nov. 25 at the age of 90. (CNS photo/Zoraida Diaz, Reuters)
On Sunday, December 4, 2016 Fidel Castro’s funeral will be held in Cuba. He died last week at the age of 90. The government announced, following his death, nine days of national mourning for one of the most popular and controversial figures of the last 60 years. The Catholic Church had a fundamental role to play in Cuba opening itself to the world, and vice versa. It is not surprising, then, that the “Lider Maximo,” in his nearly five decades of power over the Cuban island met on four occasions the last three pontiffs. In 1996, Fidel Castro was received at the Vatican for the first time by St. John Paul II and two years later, received the Polish pope himself in Cuba. A few days before pontiff’s arrival, Castro, based on a pre-existing agreement, freed 106 prisoners per the request of the Vatican’s secretary of state at the time, Cardinal Angelo Sodano. At the end of his trip, the Pope expressed "great faith in the future" of Cuba. A future which revealed its first fruits in 2012 with Benedict XVI. As a direct result of his visit, the government of Raúl Castro allowed Catholics to celebrate Good Friday. That same year, churches throughout the country were allowed to have outdoor processions. It was the first time in decades. The meeting between Benedict and Fidel was held at the residence of the Apostolic Nuncio in Cuba, and after “a long and cordial conversation,” Fidel Castro wanted to know what the Pope really did. In September 2015, during his trip to Havana, Pope Francis had a face to face meeting with Fidel. Their meeting lasted 30 minutes and was described by the Vatican as 'friendly and informal.' Two leaders, two fighters, one ahead of the other to talk about the common human problems including environmental degradation. In this regard, the Pope's gift was the encyclical Laudato si’, as well as a text of an Italian priest, Alessandro Ponzato and one of a Spanish Jesuit, Amando Llorente. Only a few months earlier, in May 2015, Raúl Castro held a private audience at the Vatican with Bergoglio and reminded the pontiff that he had studied with the Jesuits, like his brother Fidel Castro, adding "If the Pope continues on this way, I will return to the Catholic Church." Last Saturday, on hearing the news of the death of Cuba’s former President, the telegram of condolence from the Holy See was immediately released and addressed to Castro’s family - a telegram in which the Pope expressed his grief, as well as the closeness to all the Cuban people and to the entire island.