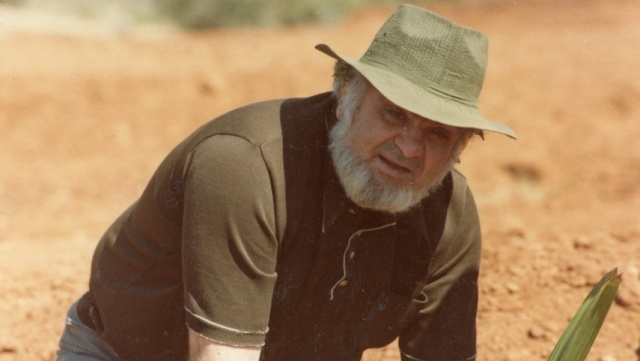 (Romeo Maione, the first Executive Director of Development and Peace and a lifelong social activist died on May 12th, 2015.  Photo courtesy of Development and Peace.)
It’s often said of the major developments in the history of the Catholic Church that it takes decades, even centuries, to fully comprehend their significance and put them into practice.  We often hear this regarding the teachings of the Second Vatican Council of the 1960’s.
Yet, it is too simplistic to say that Catholics are only now beginning to realize what the Council was about and what it means for our faith community in the modern world.  Such a claim, though generally accurate in my opinion, fails to recognize the prophetic witness of many individual bishops, priests, religious and lay men and women who, stirred by the Spirit, courageously implemented the teachings of the Council in its immediate wake.
In Canada, no one understood or embodied the teachings of the Council better than Romeo Maione, the first executive director of the Canadian Catholic Organization for Development and Peace (CCODP), commonly known as Development and Peace, serving in that capacity from 1967-1973.  Maione, a lifelong advocate for justice, solidarity and the Church’s preferential option for the poor, passed away in Ottawa last month on May 12th at the age of ninety.
Born and raised in Montreal to Italian parents, Maione received only a grade school education before becoming an industrial worker.  In 1950 at the age of 25 he joined the Young Christian Workers, a lay movement founded by Belgian Cardinal Joseph Cardijn in response to the harsh and unjust labor conditions of industrial work at the time.  The movement became very strong in Quebec, building close relationships with trade unions.  Maione, an impassioned young Catholic, quickly rose to the top of the national movement and in 1957 was elected as the international president of the Young Christian Workers.
In 1962 he became assistant director of the Social Action Department of the Canadian Conference of Catholic Bishops (CCCB), and through the 60’s and 70’s held various positions in the Canadian Labour Congress, the Canadian International Development Agency (CIDA), served as the president of the World Assembly of Youth, and worked as a union representative.  In 1987 he was invited to participate in the Synod of Bishops on the Laity at the Vatican, where he had the opportunity to meet Pope John Paul II.
Maione’s wealth of international organizational experience and ability to speak fluent English, French and Italian made him the perfect candidate to lead Development and Peace as it was taking off in the years following Vatican II.
The Canadian Bishops had returned from the Council with an entirely new perspective on the world.  During the four years the Council was in session they encountered other Bishops from Latin America, Africa and Asia who shared the life experiences of their people and articulated the need for action on behalf of justice between the wealthier and poorer nations, and across cultures.
The key to the Council’s vision of social justice, solidarity and a preferential option for the poor was human dignity.  What became apparent in the thinking of the hierarchy was the centrality of the dignity of the other, who, in a globalized world, often looked, thought and believed differently than traditional Eurocentric Catholicism.  Bishop Alex Carter of Sault Ste. Marie, Ontario was president of the CCCB in 1967 when Development and Peace began and later recalled the Council experience in this way:

“I doubt whether many of us returned from the Council unaware that we faced a challenge which could only be answered in the Canadian church with a new vision, new forms of social action and, where necessary, a new vehicle if we were to translate this into action.”

That new vehicle became Development and Peace, a democratic movement for international solidarity pursuing alternatives to unjust social, political and economic structures.  In Development and Peace, the Bishops of Canada created a structure with real lay leadership, something the Council explicitly called for if the Church was to fulfill its mission to help build the Kingdom of God.  If the Church was to be present and active in building a better world, the lay faithful had to do it; this was their baptismal responsibility.
Romeo Maione took this challenge to heart.  He asked how Development and Peace could educate lay Catholics in Canada about their baptismal responsibility.  Part of that education was redefining the commonly held view of charity and the donor-recipient relationship.  For Maione, the notion of rich people simply giving to poor people without building a mutual relationship or working to free others to participate in their own development only perpetuated the oppression and domination that was afflicting the world of that time in the form of unjust social, political and economic structures.
Under Maione's leadership, Development and Peace would stress this educational component designed to change the perspective of Canadian Catholics so that the poor were seen, not as helpless victims, but as victims of unjust structures who were capable of developing their own dignified lives and communities. The poor, in fact, were the primary arbitrators of their own development.  It was the role of wealthier countries, like Canada, to build partnerships to allow for this organic development.
Looking back on the life of Romeo Maione and fifty years of Development and Peace in Canada, it is remarkable how much good has been accomplished. Countless individuals and communities in the Global South have raised themselves up because of the partnerships fostered through the organization, and many Canadians have learned much about what it means to put the Catholic faith into action. But beyond this, the vision and faith of Romeo Maione, and others of his generation, helped create an unrivaled standard of lay, democratic Catholic organizational leadership here in Canada. That is something the Canadian church should remember and be very proud of, as the Fathers of Vatican II undoubtedly would be. 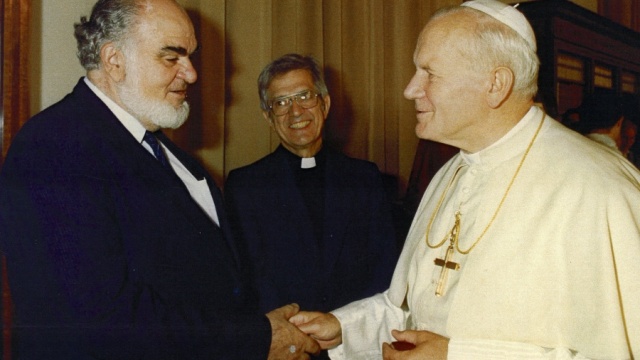 (Maione shakes hands with Pope John Paul II during the Synod of Bishops on the Laity in 1987.  Photo courtesy of Development and Peace)