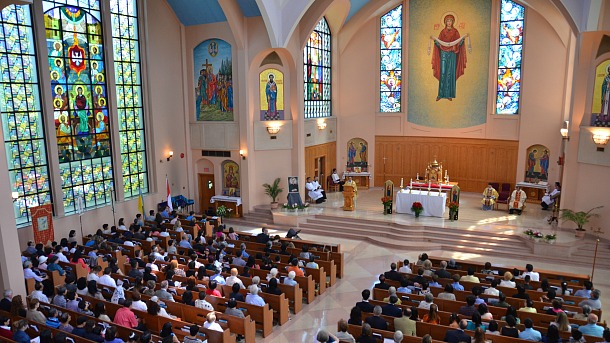 Trisha Villarante
This month there will be hundreds of Masses heard around the globe in honour of St. Josemaria Escriva, the founder of Opus Dei, whose feast day is on June 26th. But, in Vancouver, on Saturday, June 20th, about six hundred faithful gathered at St. Mary’s Ukraine Catholic Church to kick off the celebration a little earlier this year. 2015 marks the 40th death anniversary of St. Josemaria since his passing in 1975 in Rome, Italy.
This was the first time the annual celebratory Mass was held at St. Mary’s Ukraine Catholic Church, which reflected the ecumenical spirit that St. Josemaria emphasized during Vatican II. The Mass began at 11 am with confession available at 10 am. Regular attendees of this celebration were well prepared and began arriving before 10 am to find parking and seats. By 10:30 am the parking lot was completely full and attendees were making their way to the church from the neighboring streets.
At the entrance of the church, an impressive exhibit of panels was on display portraying St. Josemaria’s remarkable life in the form of old photographs and biographical excerpts. Each panel highlighted different events from his childhood in Spain, his ordination to the priesthood, the beginnings of Opus Dei in Madrid and Rome, up to his final years of service to God through Opus Dei and the Catholic Church.
Vicar General, Reverend Joseph Phuong Nguyen, was the principal celebrant with several other concelebrants including Fr. Fernando and newly ordained Father Paul Goo. In his Homily, Father Nguyen emphasized St. Josemaria’s life as an inspiration to practice the virtues of humility and trust in sanctifying one’s ordinary life. In his Homily he paralleled the Gospel of Luke regarding Peter and the miraculous catch and the life of St. Josemaria.

“Faith requires a lot of sacrifice, hardships and moments of doubt like St. Peter, but we must always persevere as St. Josemaria did to always be in unity with our Lord.” – Fr. Nguyen

Anna Eastland, an attendee at Saturday’s Mass shared, “Fr. Nguyen reminded us, (holiness and success) is not for the privileged few, because the Lord expects love from us all. He encouraged everyone to be a disciple of Christ in their chosen profession, and to make their occupation a way to Heaven.” 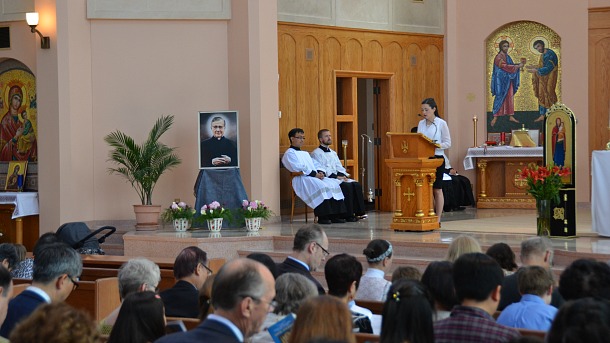 Members of Opus Dei and their families and friends attended this year not only in honour of the 40th death anniversary of St. Josemaria, but in celebration of the Marian Year of the Family; convoked by the prelate of Opus Dei, Bishop Javier Echevarría. The Marian year of the Family is a yearlong intention for 2015, which began on the Feast day of the Holy Family on December 28th, 2014. The special intention was implemented, "to place in our Lady's hands all the needs of the Church and of mankind, and to follow faithfully the Pope's intentions."
This month, Bishop Echevarria released a powerful video about the importance of family and their duty to find Christ in their daily lives. As June marks the halfway point for this Year of the Family, the video acts as reminder that parents have the primary responsibility for educating their children and that the institution of the family is the cell of society. The formation of individuals is dependent on well-formed parents, which is a dire need in today’s world. The video can be viewed here on the Opus Dei website.
St. Josemaria Escriva is coined the Saint of Ordinary Life, and has always put great importance on the institution of the family. In the text, Conversations with Msgr. Escriva (page 91) a brief summary of his emphasis on the family can be found,

“We must strive so that these cells of Christianity may be born and may develop with a desire for holiness… all Christians have a divine mission that each must fulfill in his own walk of life. Christian couples should be aware that they are called to sanctify themselves and to sanctify others… and that their first apostolate is in the home. They should understand that founding a family, educating their children, and exercising a Christian influence in society are supernatural tasks… their happiness depends… on their awareness of their specific mission.”

St. Mary’s church was filled with the spirit of family with newborns, newly weds, parents, grandparents and even great grandparents. It is evident that the teachings of St. Josemaria have been instilled in the hearts of the faithful around the world, and Saturday’s Mass was a humble snippet of what good he has influenced throughout the generations. The Mass was followed by a reception, which flowed from the church basement to the parking lot as everyone gathered to greet one another as one big family.
At the reception, stories were shared about the graces received from the intercession of St. Josemaria and how his influence has helped them and their family and friends. One woman shared that her and her husband’s lives were changed after attending their first retreats run by Opus Dei, thanks to an invitation by her friend. She expressed gratitude for his teachings, which inspired her and her husband to fall in love with their Faith and to connect it with their daily lives in divine filiation.

“The idea that when you open up to (God) in humility and trust he makes you so much more capable of doing things that you would have never imagined. Summed up simply, sanctifying ordinary life and daily work has become essential to us.” – Daniela O

Today, June 26th, thousands of people all around the world will be seeking the intercession of St. Josemaria especially on this feast day.  If you haven’t already, it may be a good idea to take the opportunity to pray for your intentions and those of your family and friends by saying his prayer card.
To learn more about Opus Dei and St. Josemaria Escriva, check out the S+L film Opus Dei: Decoding God's Work.
Written by Trisha Villarante