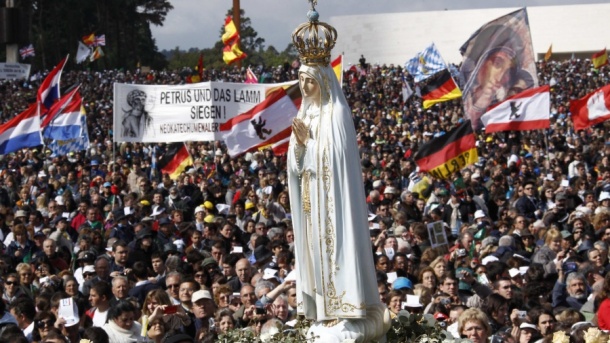 Yesterday, Archbishop Rino Fisichella, President of the Pontifical Council for Promoting the New Evangelization, explained in a press conference that at the beginning of the Year of Faith it was decided that it would be fundamental to retrace the history of our faith, and for this reason Benedict XVI placed in the foreground the figure of Mary, who represents for believers the first response of complete and total faith, in which we fully abandon ourselves to God.
That is why today, Saturday October 12, the original statue of Our Lady of Fatima arrived in Rome where it will remain until Sunday evening when it returns to Fatima. The archbishop emphasized the importance of this event, recalling that “the statue never leaves the shrine, except in the case of entirely exceptional and extraordinary events. The last time was during the Great Jubilee of the year 2000 when, on May 13, Blessed John Paul II carried out the act of consecration to the Virgin." October 13 is the date chosen as it recalls the final appearance of the Virgin to the three shepherd children in 1917.
As is traditional in these events, on Saturday morning there was a pilgrimage to the Tomb of Peter followed by a catechesis with Pope Francis in the afternoon. Also, this afternoon at St. Peter's Square there was be a moment of reflection, and at 4 p.m. a procession of the Virgin around the square. In accordance with tradition, pilgrims will be waving white handkerchiefs as the statue of the Virgin of Fatima passes. This prayer service will air LIVE on S+L TV at 11am ET. (See our schedule for rebroadcast times)

At 5 p.m. the Holy Father will greet the statue of the Virgin in front of the Basilica. Following a moment of prayer in St. Peter's Square, the statue will be transported to the Santuario del Divino Amore, where an all-night prayer vigil will take place. This prayer vigil will will be broadcast on S+L TV at 1pm ET.
Tomorrow, Sunday morning, October 13, the statue of the Virgin will return to the Vatican where the procession across St. Peter's Square will be repeated at 9.30 a.m., followed by Holy Mass celebrated by Pope Francis. Finally, the Pope will carry out the act of consecration to the Virgin and will pray the Angelus with the pilgrims present. It is expected that over 150,000 pilgrims from all over the world will participate, with international representations from 48 countries. This Mass will be carried by S+L TV at 10am ET.
To learn more about the Apparitions at Fatima, watch Witness with Fr. Thomas Rosica, CSB with Cardinal Tarcisio Bertone, SDB, outgoing Vatican Secretary of State, done in 2008 During the interview, Fr. Rosica asks the Cardinal about the significance of devotion to Our Lady of Fatima and the question of the Fatima secrets.
-
CNS photo/Stefano Rellandini, Reuters