Many of our readers have heard about the Knights of Columbus sponsored initiative Fathers for Good.  What some of our readers may not know is that their website offers a collection of husband and wife articles.  In the month of May, Salt + Light's own producer-editor couple Mary Rose Bacani and Richard Valenti are the featured authors! 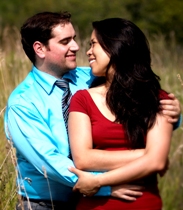 Take a look at the first three of five articles below:

A Match Made in Media Sometimes real life is better than a script. Here’s the “plot” of our engagement: June 2003. Beautiful Filipina walks into the fledgling Canadian Catholic television station called Salt + Light. Short, handsome Italian guy grudgingly films her on-camera audition as television host. She thinks he’s rude. He thinks she’s a job-stealer. (His friend is applying for the same position.) Three months later, she’s hosting the Salt + Light Magazine show, which he’s editing. They’re forced to work together. But they can’t stand each other. Countinue Reading

It All Began with a Tuque Narrator: One night before Christmas, a few years back, Mary Rose told her deep, dark secret to one of Santa’s elves. Mary Rose: That’s right. It was a late night at the Salt + Light TV office. Santa’s elf was calmly editing a television segment. I was about to blow up in my nearby cubicle over some matter that was stressing me out. Suddenly I barged in on him. Unexpectedly and very quickly, I shared with him my deep dark secret. The secret was out. Continue Reading

Once Upon a Time Mary Rose: Are you ready for a little story? Audience: Sure! Mary Rose: Okay, here it is ... Once upon a time, there was a little girl named Mary. She carried around a cobalt blue basket. This basket never left her arm. People just assumed she was born with it. And maybe she was. Continue Reading

Watch for the remainder of the articles in the Fathers for Good Husband & Wife section.