Father Rosica looks back to WYD Rio on Vatican Radio 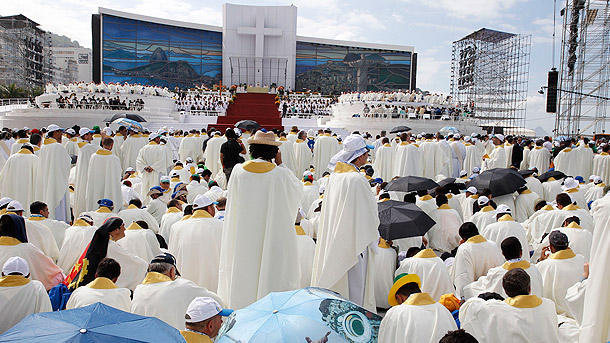 (Vatican Radio) Pope Francis has returned to Rome following his week in the Brazilian city of Rio de Janeiro for the 28th World Youth Day. Scores of young people from around the world had travelled to the Brazilian city to take part in the event, with as many as 3 million people attending yesterday’s closing Mass on Copacabana beach. Now that his year’s WYD celebrations have concluded, those who were part of the team are looking back, and sharing their reflections on the week’s events. Founder of Canada’s Salt and Light Television network Fr Thomas Rosica was the English-speaking assistant for the press conferences during the week’s events in Rio. He was also one of the organizers of the 2002 World Youth Day which was held in Toronto, Canada. Speaking with Sean Patrick Lovett, Fr Rosica shared some of his impressions of this year’s World Youth Day celebrations, noting in particular the transformation of Copacapana beach from one of the “wild places on earth” into a venue for prayer and celebration of the Sacraments. “One of the gifts of WYD,” he said. is to come in to some of these wild places, these non-religious, these secular places, and really to consecrate them… to give them a whole new significance.” When WYD comes to a place like Rio de Janeiro, Fr. Rosica said, it “not only claim[s] young people’s lives, but… cities.” With regard to this WYD in particular, he said he felt as though it were the “herald of a new springtime in the Church.” “We saw that happening in March with the election of Francis,” he added, “but this was like the Lord saying: ‘Spring is here: get with the picture.’” And certainly we had an opportunity to see that picture unfold before us.” Listen to the full interview with Fr Thomas Rosica -- Photo: Clergy attend the closing Mass of World Youth Day celebrated by Pope Francis on Copacabana beach in Rio de Janeiro July 28. (CNS pho to/Paul Haring)