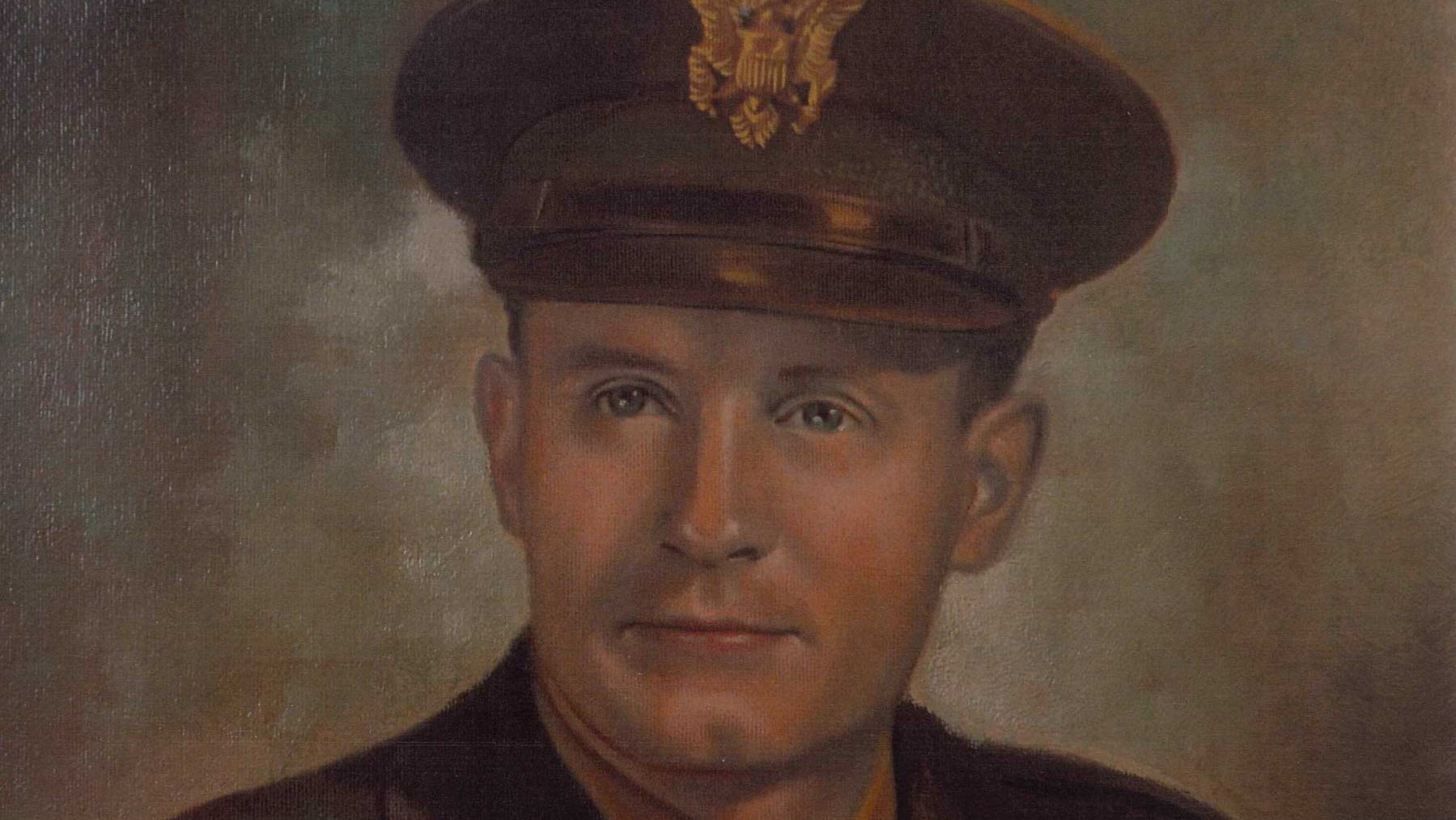 US Army chaplain Fr. Emil Kapaun died in a prison camp in Korea in 1951 and is now on the path to sainthood. Image courtesy of the Catholic Diocese of Wichita.
There’s not much to Pilsen. Fields, some houses, a church. An abandoned gas station that suggests maybe once there was something more to this place. “It makes you realize,” my brother said to me the first time I visited, “that a saint really can come from anywhere.” And Pilsen is miles from anywhere. But every year, thousands of visitors flock to this tiny town in the middle of Kansas. On Veterans Day and on the first Sunday of June, they vastly outnumber the residents, some of them having braved the sometimes scorching, sometimes drenching prairie summer weather to make the 4-day, 60-mile pilgrimage on foot from Wichita. They come from across the country and across the world to honour – and to get to know – a hero and a saint. Seventy years ago, on May 23, US Army chaplain Fr. Emil Kapaun died in a prison camp in Korea. At least we think so. But since he had been left to die alone in a ramshackle building his captors called a “hospital” and his fellow POWs called the “death house”, no one knows with absolute certainty what day he died. But that’s not important. Because people don’t come to Pilsen because of the way Fr. Kapaun died. They come because of the way he lived.   From farm boy to army chaplain Emil Joseph Kapaun was born on April 20, 1916, and grew up in the small farming community of Pilsen, Kansas. The families who settled there had come from Bohemia (today’s Czech Republic), and it was from them that young Emil inherited his strong work ethic and his deep love for the Catholic faith. He had an impish sense of humour, delighting in practical jokes, but he was also quietly devout and attentive to the needs of others, always ready to help out at home, at school, or at church. He was ordained to the priesthood in Wichita, Kansas, on June 9, 1940. Though he devoted himself to the pastoral work of a diocesan priest, Fr. Kapaun felt God calling him to a different mission field: serving the soldiers of the US Army, men and boys far from home and in need of the comfort and aid that only a priest can give. He arrived in Burma in March 1945 and threw himself into his new ministry, often travelling long distances to visit those in his care. As the war ended and American troops were gradually transported home, Chaplain Kapaun continued his rounds, travelling the same distances for fewer and fewer men. But as he wrote to his bishop, “The few are as precious as the many, and I believe that a priest who would refuse to go out just for a few would be seriously neglecting his duty.”   Korean War hero Returning to the life of a diocesan priest, Fr. Kapaun continued to feel God calling him to serve Him in the military. In 1948, with the permission of his bishop, he re-enlisted, and in January 1950, he embarked for Japan, where the United States, along with other Allied countries, had been maintaining a military presence since the end of World War II. When North Korean forces invaded South Korea on June 25, 1950, the United States responded by sending military aid, and Fr. Kapaun’s unit was among the first to go. His letters home during the following months speak of combat and the human toll, but of his extraordinary dedication to his men, we get only an inkling. The stories told by the soldiers who returned from that nightmare tell of a man fearless in the face of danger and tireless in the service of his fellow man, whether he was dragging wounded men off the battlefield under enemy fire or writing letters to the parents of soldiers who had been killed. His courage and selflessness were an inspiration to others, and he was awarded the Bronze Star for “heroism in action”. But even this extraordinary heroism on the battlefield pales in comparison with what came next.   A prisoner and a saint

“Chaplain Emil J. Kapaun, while assigned to Headquarters Company, 8th Cavalry Regiment, 1st Cavalry Division, distinguished himself by extraordinary heroism, patriotism, and selfless service between Nov. 1-2, 1950. During the Battle of Unsan, Kapaun was serving with the 3rd Battalion of the 8th Cavalry Regiment. As Chinese Communist forces encircled the battalion, Kapaun moved fearlessly from foxhole to foxhole under direct enemy fire in order to provide comfort and reassurance to the outnumbered Soldiers. He repeatedly exposed himself to enemy fire to recover wounded men, dragging them to safety. When he couldn't drag them, he dug shallow trenches to shield them from enemy fire. As Chinese forces closed in, Kapaun rejected several chances to escape, instead volunteering to stay behind and care for the wounded. He was taken as a prisoner of war by Chinese forces on Nov. 2, 1950.”

Thus reads the beginning of Fr. Kapaun’s citation for the Medal of Honor – the highest military award given in the United States – which was bestowed on him posthumously on April 11, 2013. For those of us who have never experienced the grim reality of war, it is hard truly to fathom what those words mean – what courage this otherwise ordinary man from Kansas showed and what it meant to those who witnessed it. Harder still to understand and appreciate what it meant for him to offer himself as a prisoner of war in such a time and a place, knowing the utter disregard for human life and dignity that would be shown to him by his captors. We cannot, living so far removed from this reality as we do, comprehend the brutality and desperation experienced by these prisoners of war: where they were crowded so many onto the dirt floor of a hut that they could not lie down but it was better than the fate of those left outside who froze to death, where men would eat their own scabs to stave off starvation, where the wounded were executed without mercy. The conditions in the prison camp, too, would be difficult for us even to imagine: the filth and disease and deprivation. Dysentery and lice were rampant. It was easy for a man to give up and let go of life. Easy, too, to turn inward and, like an animal, to fight tooth and nail for his own survival. Many did. But Fr. Kapaun showed what else a human being could become in the face of adversity. The less he had, the more he gave. He took care of those who were sick, removing and washing their soiled clothing so they would not be condemned to lie in their own excrement. For those who were too sick, physically or mentally, to remove the parasitic lice from their bodies, Fr. Kapaun gently and patiently took this task upon himself. He found extra food for them, too, stealing from the stores of their captors whenever he could find an opportunity. And he not only saw to their bodily needs. He provided for them spiritually as well, risking brutal punishments by sneaking from hut to hut after dark to pray with the men and to give them courage and hope. When their Communist captors would force atheist and anti-Western rhetoric on the starving, sick, and demoralized soldiers through indoctrination sessions, Fr. Kapaun calmly and logically refuted them and reminded his listeners that what they believed in was real and was worth living for. Many of those who returned home at the end of the war attributed their survival to Fr. Kapaun. But their heroic chaplain was not immune to the inhuman conditions they were all living in, and such devotion to his fellow man took its toll. He became weak and developed pneumonia and a blood clot in his leg. His captors, looking for a way to rid themselves of this priest who gave them so much trouble by caring for others, took the opportunity to shut him away without food or water in what they called the “hospital”, though it was nothing of the sort. And there, having forgiven his captors and having asked their forgiveness in turn, Fr. Emil Kapaun died, probably on May 23, 1951. [Read a reflection on Fr. Kapaun's death written by Scott Carter, who works for the Diocese of Wichita as coordinator of the Fr. Kapaun Guild.]   A hero and a saint for today Like all heroes, like all saints, the good that Fr. Kapaun was able to do with his life did not end with his death. Through his example, he continues to inspire others to live a life of virtue and courage oriented toward Christ. Since they returned home from Korea in 1953, Fr. Kapaun’s fellow prisoners have been tireless in their efforts to bring him the recognition that he deserves. They succeeded with the US government, who awarded him the Medal of Honor in 2013. But before they all go to join their friend and hero in the next life, they would like to see one final honour bestowed on this man they know to have been a saint: canonization. And though canonization in the Catholic Church is rightly and necessarily a long process, hope for Fr. Kapaun’s cause looks very bright. As the Diocese of Wichita and the Congregation for the Causes of Saints make sure that every step of the process is carefully followed, popular devotion to him continues to grow and prayers for his intercession continue to be answered. And as an added, unexpected blessing, pilgrims will soon have a new location to visit when Fr. Kapaun’s recently identified remains return home this September and are buried in the Cathedral of the Immaculate Conception in Wichita. It is hard not to feel inspired by the example and witness offered by the life of Fr. Kapaun. He shows us that holiness and heroism find their origin in the everyday and ordinary. None of us knows what the future will bring or where or to whom our life of faith will lead us. But like Fr. Kapaun, we are all capable of living to the full the life each of us is called to. And who knows? Perhaps we, too, will become heroes and saints. Fr. Emil Kapaun, pray for us!   Want to know more about Fr. Kapaun? Find out more about Fr. Kapaun from the Diocese of Wichita’s Father Kapaun Guild. Watch John Thavis describe his experience of meeting three young people who have received miracles through the intercession of Fr. Kapaun.