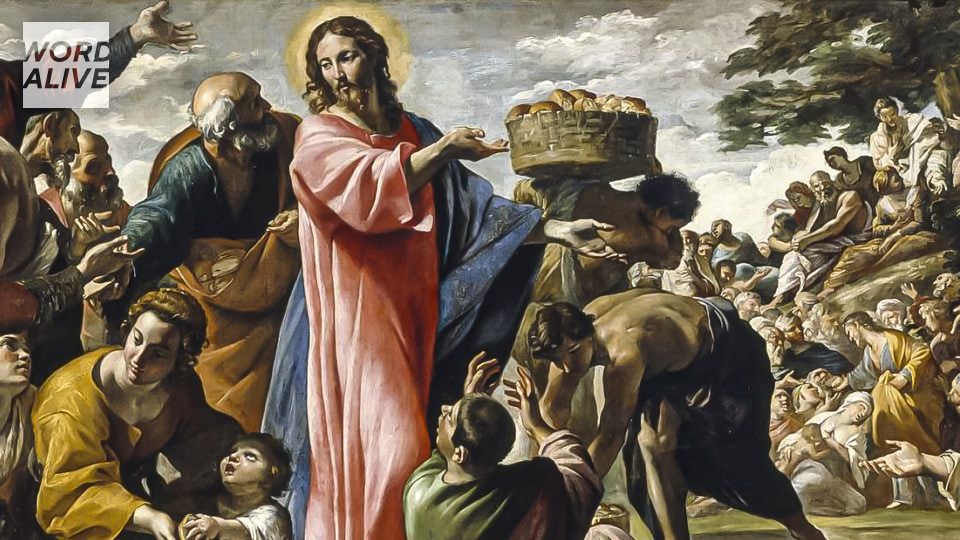 Detail of Miracle of the Bread and Fish by Giovanni Lanfranco (Source: Wikimedia Commons)

A reflection for the Seventeenth Sunday in Ordinary Time, Year B

Give us this day our daily bread… These words of the Our Father, the Pater Noster, have resounded from the lips of Catholics for two thousand years. They are spoken in the Mass, during the recitation of the Rosary, and in that great, unifying prayer of the Church, the Liturgy of the Hours. It is a continual reminder that God is present to us in our corporal need — sustenance, shelter and clothing — insofar as it helps with our spiritual need, which is whatever God deems will get us closer to sanctification. In the Scriptures, Jesus exhorts us to think about the birds and how they receive their food from God. Or the flowers and how wonderfully God “dresses” them. Every Catholic remembers these passages. However, we often fail to recall that not only is our God a God of abundance, but He is, at the same time, a God of super-abundance! In this week’s Gospel reading, we hear again about the Feeding of the Five Thousand. Jesus had spent the day performing many miracles, and the crowd followed him to the far shore of the Sea of Galilee. It was getting late in the day, and the people had nothing to eat. Jesus, testing the disciples, asked Philip where they could buy bread. Philip answered with a mind fully rooted in the ways of man instead of the ways of God: “It would take more than half a year’s wages to buy enough bread for each one to have a bite!” Andrew then saw a boy with five small barley loaves and two small fish. In that moment, it is hard to imagine that he and the rest of the disciples didn’t immediately think of Elisha and his similar food-related miracle (related in this Sunday's first reading). In that story, Elisha instructed a man from Baal Shalishah to set twenty loaves of barley bread before one hundred men. Through the power of God, the loaves were multiplied: “Then he set it before them, and they ate and had some left over, according to the word of the Lord” (2 Kings 4:44). Despite observing very clearly the hand of God orchestrating this biblical callback, Andrew, like Philip, continued to be plagued by worldly doubt. He pleaded, “How far will five loaves and two fish go among so many?” Granted, the need here was bigger and the means slimmer for them than it was for Elisha, but they also had the benefit of the Son of God at their side! It was as if he had completely forgotten about all the miracles Jesus had performed that day and every other day. Jesus instructed the disciples to have the people sit; then He gave thanks and distributed the loaves and fishes. It should be noted here that the five thousand only accounted for the number of men in the crowd and did not include women and children. When we take their numbers into account, it is likely that the crowd was closer to ten thousand, or maybe more. Still, everyone ate as much as they wanted. This was God’s abundance, indeed. Yet Jesus was not finished. He told the disciples to gather together the pieces that were left over, so that “nothing is wasted”. God’s super-abundance was on display when a total of twelves baskets were filled with the remnants. But why twelve? St. Thomas Aquinas relates in his Gospel commentary, Catena Aurea, the thoughts of St. John Chrysostom:

Therefore they gathered them together, and filled twelve baskets with the fragments…But why did He give the fragments to His disciples to carry away, and not to the multitude? Because the disciples were to be the teachers of the world, and therefore it was most important that the truth should be impressed upon them. Wherefore I admire not only the multitude of the loaves which were made, but the definite quantity of the fragments; neither more nor less than twelve baskets full, and corresponding to the number of the twelve Apostles.

By this Gospel commentary we can see that what is super-abundance to the eyes of human beings is, for God, simply being a beneficent Father. Every action, every gift, is part of His plan of loving providence. Everything is willed by God, and everything serves a precise purpose. God is Love, God is Order, God is Perfection. “Nothing is wasted,” as Jesus says. One other passage that all Catholics remember is, “My cup runneth over.” And we know in fact that, for God, too much is always just the right amount.

Marc Boudignon is a Senior Editor with Salt + Light Media.