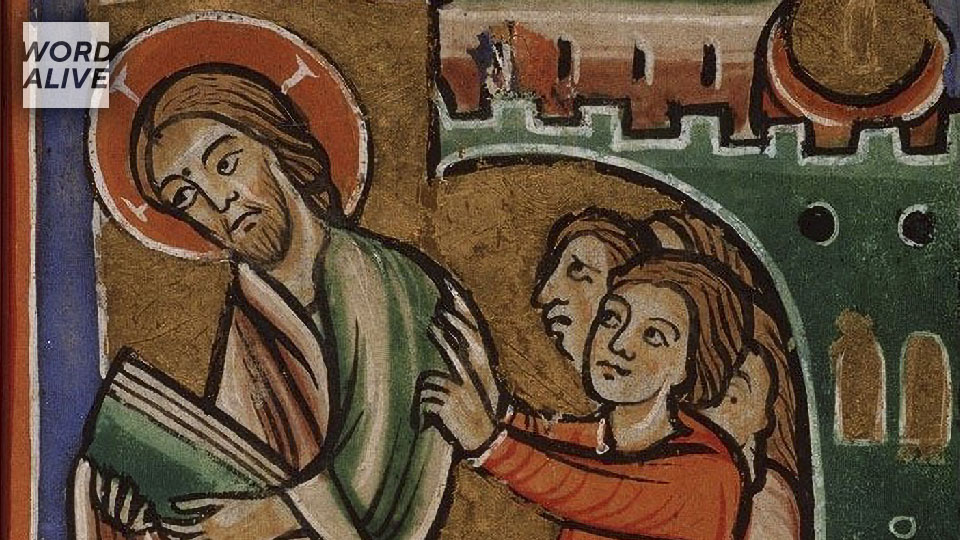 Medieval manuscript illustration depicting Jesus' rejection at Nazareth. From a 12-century French manuscript known as the Illustrated Bible of The Hague, part of the collection of the Koninklijke Bibliotheek National Library of the Netherlands

A reflection for the Fourth Sunday in Ordinary Time, Year C

When’s the last time something didn’t quite go to plan for you? Failure and disappointment are a part of life! I remember the first time I was asked to give a talk. I had not long joined seminary and I gave this talk to a group of teenagers in a parish. It did not go well at all, and I felt embarrassed and rejected. Returning to seminary that evening, the rector noticed the glum look on my face. When I explained what had happened, he simply smiled and said, “That’s a sign you will make a good preacher. Go check what happened to Jesus at his first homily…” The Gospel we have this week describes precisely that moment in Nazareth. The prophetic message of Jesus is rejected. His first preaching mission appears to fail and bear no fruit. That surprises us. I find the reaction of Jesus equally surprising. He does not persist with them but simply takes his leave. Somewhat unceremoniously some might add. Jesus moves on (literally) from “failure” in mission. Do you? We experience failure and rejection in various areas of our life but perhaps none baffle us more than when we try – and fail – to bring someone to Jesus. Isn’t God the All-powerful supposed to be on our side? How could the outreach fail and bear no fruit? So it can confuse us…and it can hurt us too. It hurts, for example, when it is someone who knows us well who rejects or ridicules the prophetic message we gift them with. In my own ministry I have been in many situations where I had to admit that I had been “barking up the wrong tree”. That I was not so indispensable after all and needed to step aside so that others could try and bear fruit where I had failed. And other times where it seems that the ministry I offered achieved a breakthrough where others had failed to. It takes a lot of humility to acknowledge and let go of the “audience” that is evidently not for me to evangelize. And a great deal of courage to step in where others had previously failed to bear fruit. And yet if the message is truly prophetic, is truly a fruit of the Spirit, why should we fear, or take failure personally when things don’t go to plan? A temptation I admit to in these moments is to doubt the message and therefore to dilute it. In some ways to “appease” the crowd. In the case of Jesus in Nazareth it appears that the first part of his message was well received. His Good News proclamation of God’s deliverance struck a chord. It was the second part – where he held a mirror up to them – that turned the mood against him. Yet he chose to share that part too. When that didn’t work out, he simply moved on to the next town, Capernaum. Changing the message simply to appease the crowd is a disservice to them and erodes credibility. It risks rendering the message a lot less prophetic and a lot more pathetic. Ironically, today Nazareth is considered a kind of Christian oasis in a region where other faiths dominate. God is always capable of sending new messengers. How is your experience of bringing Jesus to people going? Have you stopped trying to bear fruit because you once experienced failure? Is there any “audience” you need to step aside from, to give others a chance to try instead? Is there a Capernaum waiting for your ministry? Back to my unsuccessful first talk and the words of the rector: I cannot know for sure what fruit my preaching leaves, but I can say that is the aspect of ministry where I feel most engaged with God’s spirit and people. I am so glad that I moved on from that disappointing experience. And I am quite sure those teenagers’ faith will have survived despite my failure that day! If the message you are carrying truly comes from the Spirit but the message isn’t coming through to your audience, don’t switch his message. Switch your audience. Leave Nazareth to others and move on to Capernaum. And so, may your failure in Nazareth lead you to bear fruit in Capernaum.

Fr. Anthony G. Caruana is a priest of the Diocese of Gozo (Malta). He was ordained in 2010 and has served in Scotland and Canada.